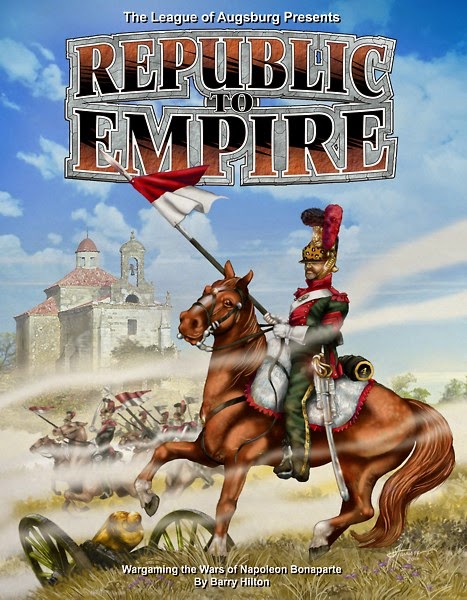 Just a quick note to announce that Republic to Empire is now available in PDF form. As with BLB you can order hi-res and lo-res versions. What you choose depends on your preferred method of viewing. The lo-res version is designed for fast viewing on tablets and laptops. While you CAN print this version, the resolution won't be great. The high-res version looks great on tablets and PC's, especially on HD monitors, but may be slow to load. The hi-res version is designed to allow you to print sections (or the whole book if you want, though with ink prices these days it would probably be cheaper to order a book)! You order your copy in the League of Augsburg shop today!

'The superb presentation and wonderful pictures might lead the casual observer to believe that Republic to Empire is the equivalent of a coffee table book – a visual spectacle to be admired. And so they should be but there is far more than that! The rules are very well researched, clearly explained and most importantly, eminently playable. They are admirably suited to big battles but also to smaller games. Barry has introduced mechanisms designed to reduce the all seeing and instantly reactive abilities of the wargamer while rewarding initiative and forward thinking. This development really does help reflect the realities of the tactical battlefield of the time. Suffice it to say that this is NOT just another set of Napoleonic rules – it represents a real step forward in reflecting Napoleonic warfare on the wargame table' - Charles S. Grant