I considered the first run of this game not a fluke but perhaps a little fortunate for the privateer ship.
So, giving it another go with pretty much everything the same except, the opponents this time were the Dutch West India Company Geoctroyeerde Westindische Compagnie  or GWC.  The ship profiles were exactly the same with Jupiter replacing Elizabeth, Schiedam substituting for Swan and Egmond for Quaker.

The wind speed was randomized but turned out to be a light breeze as in the previous game. The privateer also had a +1 initiative advantage which was randomized. 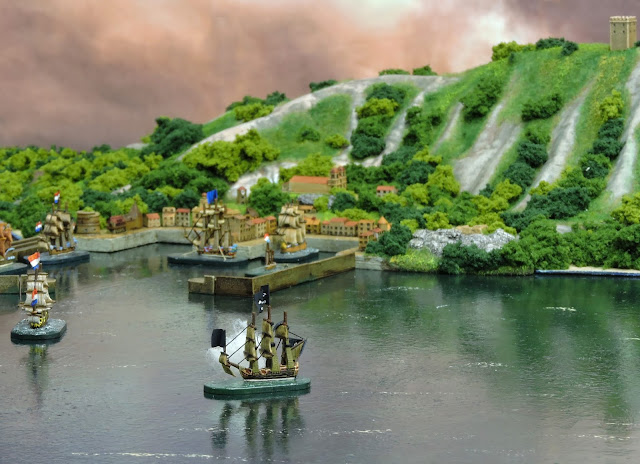 I had no expectation of what the outcome might be but had of course, learned some lessons from game 1 so decided to try a bit harder for the Dutch to see if I could subdue the dastardly pirates. 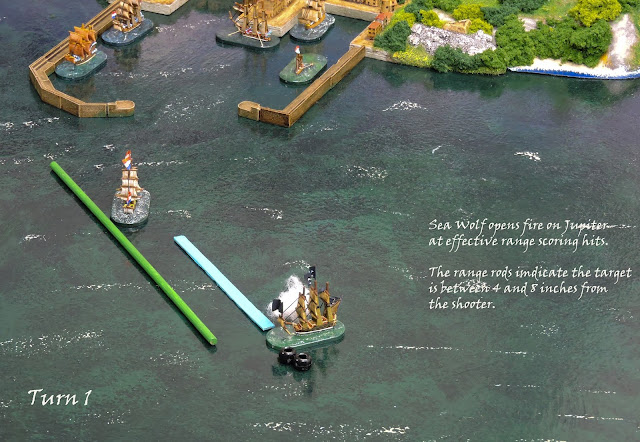 Lupus got the initiative in Turn 1 allowing him to broadside Jupiter. The heavy guns scored two hits. The West Indiaman returned the compliment on T2. 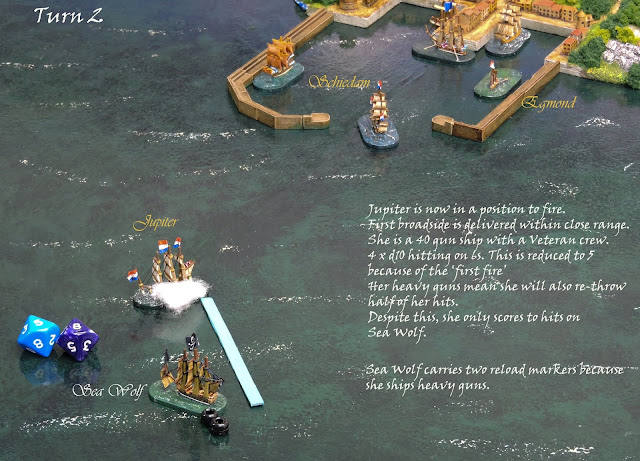 The Dutch won the initiative on T3 Jupiter, intent on avoiding a boarding action before the enemy ship was softened up by gunfire, moved away. All of the Dutch ships made it to the open water and the little Egmond hit the privateer with a musket range stern rake. 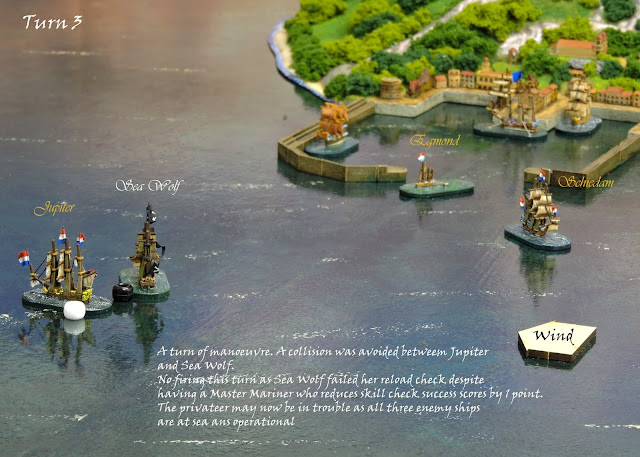 Things looked as if they'd be somewhat tougher in this game than the first for the privateer.
On T4 Sea Wolf had reloaded and thudded three hits into Jupiter which resulted in her losing her mainmast. 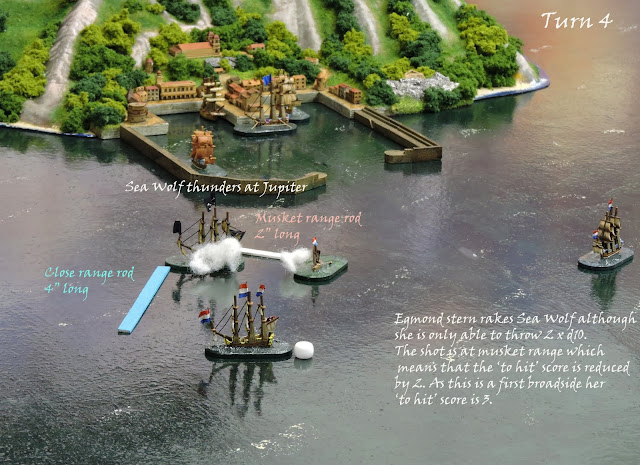 Despite this, the privateer sustained two more damage points on T5 from Jupiter and was close to 50% on hits at this point. 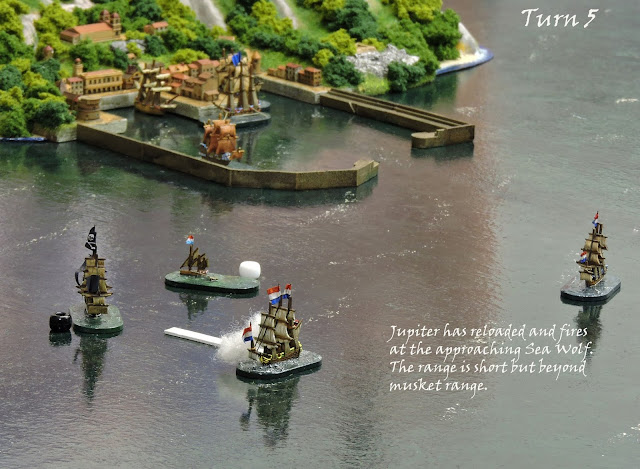 By T6 Sea Wolf was in a position to board Jupiter and at the point of grappling, neither ships guns had reloaded . Although the privateer had an advantage with better combat capability for privateers plus an extra character for combat, the differential was a net +2 because Jupiter herself had a flag officer and marines aboard. 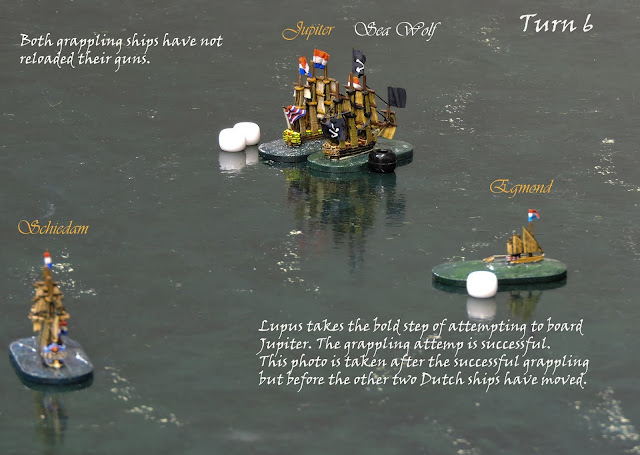 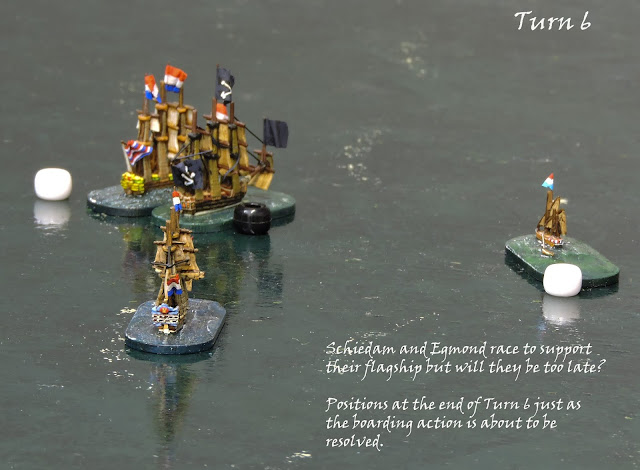 The combat scores are created by throwing 2 x d10 for Veteran ships of this build and adding the modifiers. The differential in scores was a remarkable 18 v 7 causing an immediate striking of the Dutchman's colours!


Although the remaining two Dutch ships had manouvred into good positions to harass Sea Wolf, the squadron was compelled to take a morale check which, it promptly failed! Seeing the flagship and commander captured, the Dutch ships broke off and headed back to the harbour. 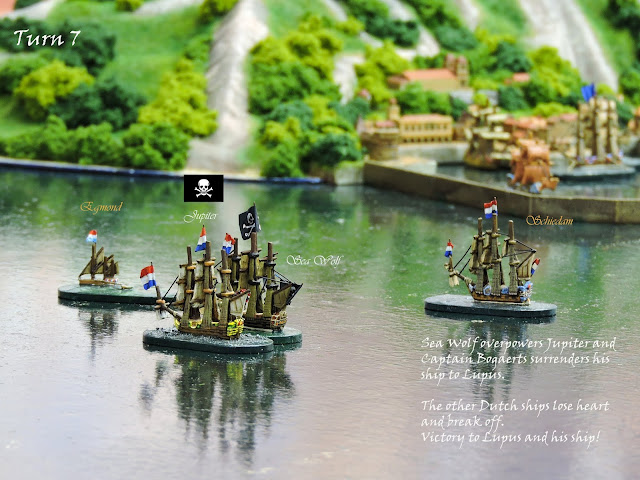 Sea Wolf was once again triumphant with the exact same damage level as the previous game. Points lost were 168 and the Dutch lost 185.


I am now compelled to try once more with a French squadron!