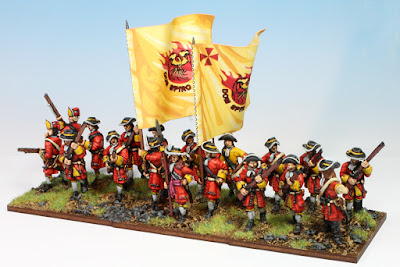 This is a really useful unit for any Ireland collection because they fought in most of the major battles, including Aughrim. Plus the flags are really cool - something beyond the normal crosses! They will be equipped with a pike stand as well, but I'm going to paint those for all four foot regiments at once.

More terrain stuff is on the way, but I am waiting for some supplies to be delivered. In the mean time I have plenty of units to paint! The Earl of Clancarty's is up next in red coats with white facings (again, lots of units this combo can be, including English Foot Guards), plus Colonel John Hamilton and Lt Gen John Cairns are flag swaps from my existing units so I should be able to get them posted shortly as well.
Share Share on Facebook Tweet Tweet on Twitter Pin it Pin on Pinterest
Back to The League of Augsburg