by Clarence Harrison December 16, 2015
Clarence Harrison - I started a regiment for Beneath the Lily Banners for our Historicon 2016 game: Sir Maurice Eustace's regiment of foot from the army of King James II. 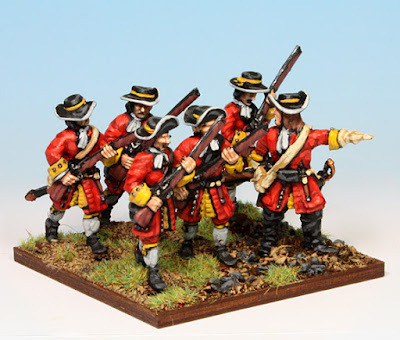 For the Battle of Penny Burn Mill, the regiment will be 18 models plus a pike stand.

Of course, the unit is NOT in my plan for the Battle of the Boyne, but I always planned to collect beyond the handful of battalions I needed for that anyway. Eustace's regiment was present at most of the other major battles including Aughrim. Besides, red coats with yellow cuffs is a very common uniform and could also be used for many others with a flag swap...

Not to mention one of the dozen's of regiments we know nothing about!