On a recent flight back from New York I hit the creative wall. I intended to use the journey to write something new but found myself simply staring at the screen.. it had been a hard week at the office.
I resorted to trawling through my files of previously written pieces and eventually I came across an almost finished scenario for Donnybrook which was perhaps 18 months to two years old.


It involved the remnants of a Swedish army wending its way across hostile territory in an effort to reach safety and save their colours from marauding Cossacks and Tatars during the latter part of the Great Northern War.


The piece was almost finished but not quite, I had obviously abandoned it and forgotten. It chimed with a new uniform guide I have just completed on the Swedish infantry at Poltava which we hope to release soon. In that guide I explore the look of the Swedes after two years of continuous campaigning. I use the term Ghost Army in the guide and that seemed to connect strongly with the unfinished piece for Donnybrook.


So with a few hours to go and a need to study the backs of my eyelids I drifted away thinking about what I could do with these connected topics. I did manage to bang another couple of hundred words into the article (with eyes open not shut).


I also came up with an idea which clicked with yet another idea Clarence and I have been concocting in the kitchen related to Donnybrook and the 'dark side'. I decided to create the Swedish Ghost Army using Warfare Miniatures in various morphed forms. The force would be small - all Veteran and dressed in an assortment of clothes picked up on campaign.


On the Saturday a great way to beat the jet lag was to get into the workshop and do all the conversions. It took about six hours to select, cut, milliput and refine all but six of the twenty nine models.


As I did this I decided to adopt a skirmish gaming convention by naming all of the small units and giving each model an individual identity. This in turn linked my mind to one of my favourite novels of all time Røde Orm by Frans Bengtsson. 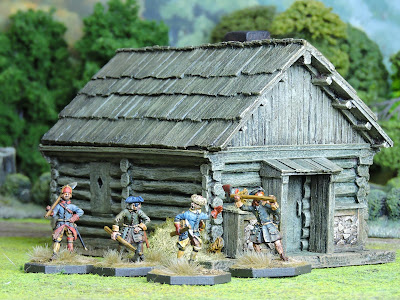 In the next part of this series I will link Røde Orm, The Ghost Army, Donnybrook (Dark) and the retreat from Poltava with my conversion work and introduce the modifications to the GNW range with which I am rather pleased.