Something Wicked This Way Comes

Clarence Harrison - Since Barry has started posting his new Donnybrook stuff I figured it was time I put in a bit of work on mine since I have yet to assemble a Donnybrook collection for our period (having tricked Mr. Hilton into painting several hundred models for the project, what was the hurry?). Actually, I've been developing a force for a few months now, but I've been waiting until I had a decent sized force to roll out the images.

Well, yeah. This is for Donnybrook Dark as we've been calling it. Take the Cultist list from Donnybrook and throw out all of the stuff about the supernatural elements playing on the superstitions of the time - monsters are real...

The Mourne Vale lies between the kingdoms of Scandavia and Rusland. This fell region is a  land of brooding forests, lonely hills, and haunted ruins, but amid it's desolation lies treasures of a forgotten empire.

The king of Scandavia is wedded to a Fey Queen (some claim ensorceled). The men of Scandavia do not practice magic, but have an alliance with the folk of the Queen and may call on creatures of the forest and darker places when called to war.

The shadowed realm of Rusland is ruled by a dread necromancer. Warlocks and sorcerers march in the armies along side mortal soldiers and they may call on dark powers, marshaling spirits, undead, and other wicked creatures to their banners.

...or something like that. I REALLY wanted to paint some of the GNW stuff, but I didn't want to commit to battalions and regiments as I have my hands full with my Ireland project on that front. Donnybrook seemed like the perfect answer. 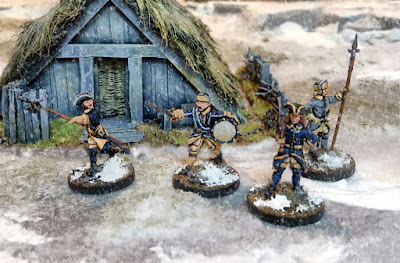 I started with the Swedes... err... Scandavians! The captain is an easy conversion, replacing his right arm with a pistol arm from a cavalry trooper. Currently my force consists of the following: 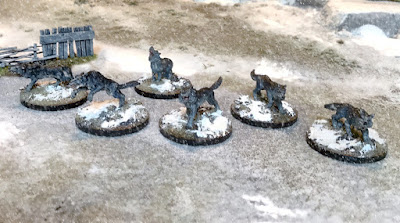 I still need to make cool names for my characters. I'm actually missing my Pack Master (Drilled d8) which is the only type of character you can attach to a unit of beasts (wolves, bears, etc.), but he is sitting on the painting table and I'll get to him later this week. I also want to add a second unit of Garrison Infantry (with a Standard Bearer) and a mounted element of mercenary Teutonic (German) Horse.

I have sketchy rules for the monsters. Basically the wolves are treated as Horse for the time being. They don't cause fear like the Hellhounds because, well, this is Donnybrook Dark - wolves are just not scary. 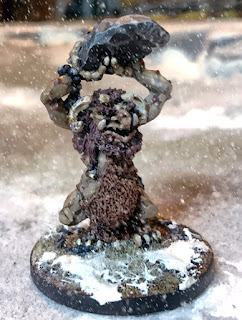 The Troll is a different story. This is Örjan. You may have noticed rather than Drilled d8 or Veteran d10 he is labeled as a 'Brute d12'. This isn't meant to refer to his etiquette or table manners. Slavic trolls come in all shapes and sizes, but some could actually be quite erudite. The Brute tag simply means that the d12 is used only for physical actions - attacks, breaking down doors, etc. If Örjan wanted to attempt to climb a tree (who knows why) or any other special action that doesn't require strength, the troll uses a d6 to resolve other actions. A troll DOES cause fear (enemy models must throw a 6+ on their Ability die to shoot at, charge, or fight) and is also hard to kill (gets to roll on the Wound table like a character with a d12).  Also, Brutes don't generate special character slots. I haven't decided if one force point buys one or two trolls as it needs more playtesting to determine what's fair - I have a second troll named Hugo on the table as well.

The terrain is a work in progress, but far enough along to serve for a couple of pics. The Mourne Vale isn't always wreathed in snow, but I decided to really make this entire project something different. I've had a set of the Citadel Realm of Battle boards ever since they were first released and decided it was finally time to paint them (more on that later, but essentially a set of six 2x2' terrain tiles that are wildly expensive and covered in skulls).

I'll certainly have more in the future. After I paint my Pack Master, I'm going to turn my attention to the sons of Rusland - stern infantry, dashing Cossacks, witches, and zombies...