Work has been pretty all consuming of late and I have been promising myself a gaming treat for a while merely as a little carrot to keeping me wading through the grind. The naval rules have been growing in detail and feel and during my travels. A point system and some of the random elements which I like to incorporate in rule mechanics to remove player control have been added and I wanted to road test both. The collection of ships is now over sixty of all sizes and nationalities so, on Friday night I planned the battle that I wanted to fight on the following day when everyone was out and I could throw dice, take pictures and notes to my heart's content.

Having completed a couple of French ships I decided on 1672 as the year of the imaginary battle and this allowed me to ally the English and French against the Dutch. I chose one of the familiar stamping grounds - the Lower Thames Estuary as the location and set about drawing up the forces. 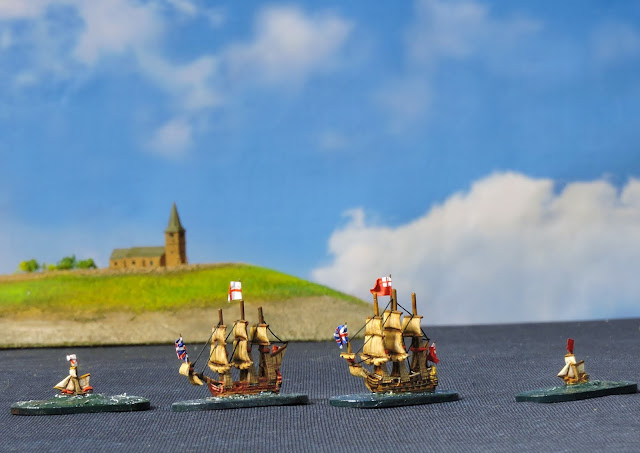 By creating a base level points value for each type of ship with an untrained crew (Raw), I added values to upgrade the crew to Drilled and Veteran. I suspect users of my land based rule sets will already be getting familiar with the terminology. To add further levels of customization, the addition of a Master Gunner to the crew, detachments of soldiers or marines, a flag officer, improved sea worthiness, a reinforced hull, heavier guns and the like increases the cost of the vessel.

With one eye on the campaign dimension, the cost of buying sea ports, dockyards, foreign colonies producing tradable goods has also been sketched out but let's return to the fleets.

Here is an example:

You get the idea.

Having done the adding up, here comes the sauce. Using a card deck of positive and negative random events each vessel of 5th rate or above was dealt a card which impacted on its performance on the day of the battle.

Here are the random effects generated for this action:

Of course, in a multiplayer game the nature of these cards would be unknown to the enemy as would the quality of any ship's crew which will make moves, behaviour and tactics a much more carefully considered process than simply lining 'em up and shooting .Parts 2 and 3 are the battle report.