The flag most commonly associated with the Revolutionary War is the Betsy Ross Flag. Although this flag is commonly believed to have been created by Betsy Ross, the actual origins of the flag are unknown. According to legend, Betsy Ross was approached by General George Washington and George Ross, Betsy's uncle. However, Betsy Ross's role in designing the flag continues to be debated to this day. Regardless of who first created it, the Betsy Ross flag remains an icon of the American Revolution. It appears in numerous Revolutionary War-era depictions, even if historically inaccurate (as in Washington Crossing the Delaware). 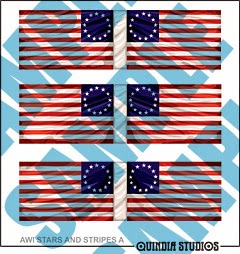 It was also probably not carried by units in the field and served only rarely as an installation flag. However, it is iconic to the period and wargamers have been using it for years, so the first sheet features this flag in three different shading patterns (so you can field three without duplication).

The next set features three distinct variations. The Bennington flag is associated with the Battle of Bennington and presents yet another variant of the stars and stripes. It is differentiated not only by the unique pattern, but by an overlarge blue canton, and a reverse order of stripes (starts with white at the top). It was possible carried by a New Hampshire regiment. The second flag is the 'Cowpens' flag rumored to have been carried by the Maryland/Delaware battalion at that battle (later research claims this was not the case, but I'm going to use it on one of my continental battalions). The final flag combines the union jack symbol with the thirteen stripes and was believed to have been carried by several units (and maybe the ONLY reliable choice for  including the 1st Massachusetts and the 1st Canadian regiments. 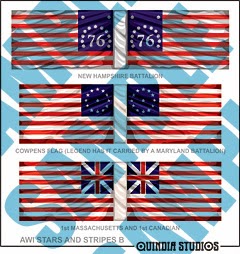 The third features yet more variations. The first two were used by naval vessels and again by some installations. However, at least one drawing from 1779 shows one carried by an infantry formation (seen below the sample sheet over Clinton's Brigade).

. The flag is recognizable by the reverse colors normally seen on American flags: red and blue stripes in the field with eight-pointed blue stars on an elongated white canton. 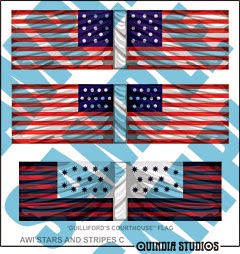 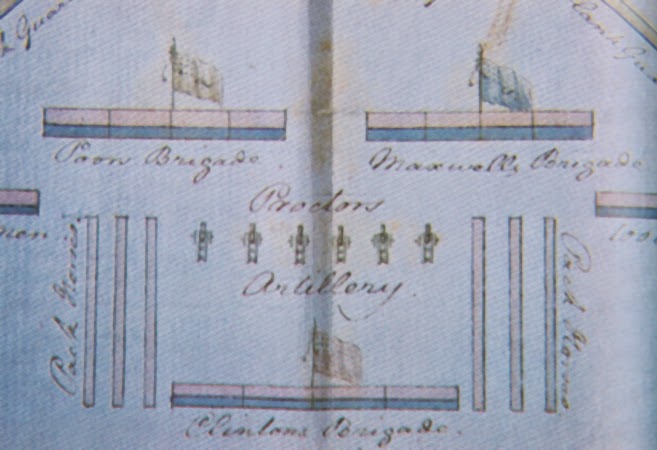 There are many variations on this theme: different star patterns, stars with five, six, or eight points, etc. and again rarely carried in the field, but this is one that you can at least make an argument for.