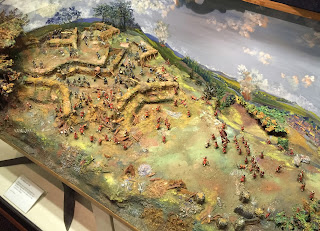 These shots show a nice diorama which resides in the Guards Division Museum on Birdcage Walk.

I thought blog followers would enjoy the construction on the defences and the interesting combinations of figures used in the diorama. 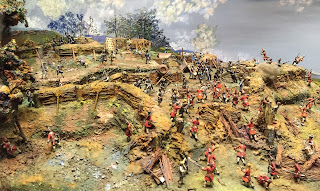 There was not a lot of information of who made it, when it was made and what make the figures are but it is a super piece of work.

The attack on the Schellenberg took place on July 2nd 1704 in order to aid the capture of the town of Donauworth. It was a difficult attack uphill against a prepared position and involved many thousands of Grand Alliance infantry - German, English and Dutch). 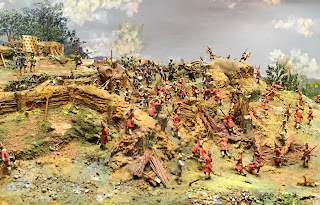 The diorama shows (I think) the moment when the Forlorn Hope of the first attack wave hit the defence works. These men came from the 1st Regiment of English Foot Guards (Later the Grenadier Guards). They attack was described by the French as fearsome and noisy. 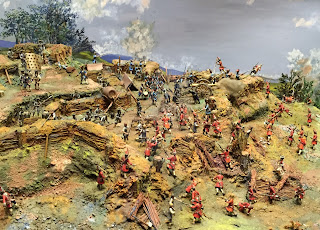 It took the Allies some time and repeated attacks to finally capture the Franco-Bavarian position and it was a bloody hand to hand affair.

To prove that I don't have a Marlborough 'black out' on the blog I decided to share this one! Well done Corporal John, the battlefield is really where you belong, not politicking behind the curtains!