Down to two men for our weekly game I turned to a small scenario I really enjoyed writing and playing solo. It comes from a pair of 4Play packs which I created model the Dutch invasion of England in 1688. I hesitate to use the euphemism which has now become a common descriptor for this foreign takeover. The pool of words deployed around it are the stock in trade of someone going for the big cover up  - bloodless, glorious, liberation, deliverance, democracy etc. Whatever the rights or wrongs of James Stuart, it was a foreign invasion under arms. 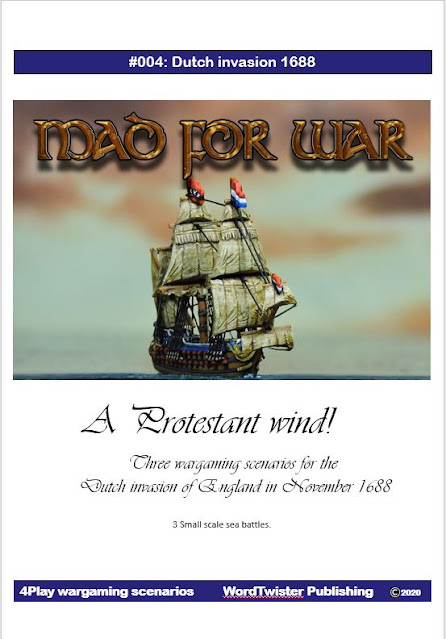 Anyway, the wargaming possibilities are tremendous and not all What ifs. The skirmishes at Wincanton and Reading actually took place. The turbulence in the armed forces and the cavalry patrol clashes in Wiltshire are documented. The mob violence in London, priest and Catholic 'codding,' the King's escape, capture and second escape and the Queen's dash down the Thames with the heir all happened.

Irish troops played a prominent military part and suffered for their participation by being incarcerated in gaol on the Isle of Wight. This compelled the recruitment of a brand new second battalion for James's Irish Footguards due to losses in England. The most powerful military arm England possessed was the Navy. James had been Lord High Admiral and directly invlved in its rise to greatness. He had loyalty there but there also existed a seething resentment amongst some officers and crews.

It is to two Irishmen that we turn for our little pre-Christmas scenario -  68 years old Admiral Sir Edward Spragge - Roscommon Royalist, pirate, ex slave, admiral and Stuart supporter. He is in the division remaining loyal to James II at Portsmouth and trying to prevent the defection of four ships to Willem van Oranje. They are led by 30 years old Meath gentleman Captain Mathew Aylmer of the Swallow who has written to Willem and is chief amongst a Navy cabal of anti-Stuart captains.

The objective of this game is simple. With all ships anchored off Portsmouth, the defectors must breakout and get two or more ships off table to the south. Spragge must prevent this without sinking the defector's ships!

The defectors have four ships of between 40 and 70 guns whilst the Loyal Navy has two massive but slow battleships, a 70 and a 44. The names of the ships commemorate the respective causes with tongue placed firmly in cheek. All are real vessels from the time and the names are accurate - Britannia, Vanguard, Rupert and Sedgemoor for the Loyal Navy. Anne, Monmouth, Swallow (Aylmer) and Sweepstakes for the Defectors.
When I played this game originally the score was 2-2 a draw. Aylmer was caught and hung from the yard arm by Spragge. I did it in 1/2400. This time I had all the models from Ark Royal in 1/1200 but still used the 2 x 2 feet table.
We allowed the game to run to a conclusion rather than capping it at four turns as per the original 4Play scenario.

Colin played the Defectors. From the beginning it was clear he would cram on full sail, try and catch the south easterly and dodge through the cordon. The lead three ships got out of the traps quickly but Anne could not haul up her anchors and came under fire from Portsmouth round tower. The Loyal ships took a while to get underway but were soon manoeuvring to block any escape. The Sedgemoor turned into the wind and promptly found herself in irons as Sweepstakes glided past with insults exchanged but no shots fired. Spragge ordered both Britannia and Rupert to open fire on Aylmer's Swallow.

The captain was a marked man. Even at several hundered yards range the Swallow took a pasting and caught fire whilst still cramming on sail to break out. Vanguard had gotten very close to Monmouth and let her have a raking broadside which should have been fatal but was poorly delivered. The damage was still significant and dozens of crewmen were cut down. Monmouth immediately slew into the massive battleship and the collision caused such damage that she almost sank. Vanguard failed to board her and finish the escape attempt.  As she limped on she collided with Rupert and promptly sank into the Solent.

By this time Sweepstakes had slipped the net into the Channel. Aylmer's crew had gotten Swallow through the net and the fire finally under control. It would have been 2-2 if the Loyalists had not allowed Monmouth to collide with Rupert and sink! They lost a victory point for that. Anne, the laggard really didn't have her heart in it. Another desultory shot from the round tower caused her to strike her colours and drop anchor - she surrendered.

All crews were classed as Able for seamanship skill checks. The Loyalists fired as Lubbers through a reluctance to kill or damage their brothers in arms and the Defectors checked morale as Salts unless fired at. Damage caused a series of punitive morale modifiers for the traitors. It was great fun and this time.. Aylmer made it free - obviously marking the start of his elevation in the 18th century to one of the most senior admirals in the Royal Navy.
Share Share on Facebook Tweet Tweet on Twitter Pin it Pin on Pinterest
Back to The League of Augsburg