Taking liberties with the Russians

by Barry Hilton March 05, 2017
Is nothing sacred? Hilton bastardizes yet more conventions to get result.....
Two years ago I got Clibinarium to create ten test sculpts for the GNW which have developed into a large and rapidly growing range. One of the first sculpts was a marching Russian musketeer.
Although that figure has very recently developed into a full five variant code which may, by the time this post is published be commercially available,I had dozens of the original test sculpt cast up. 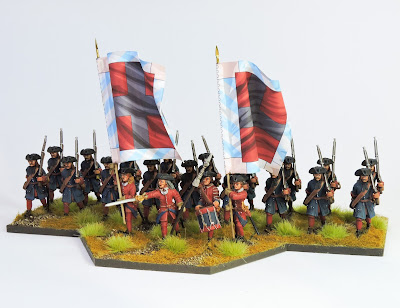 I never got round to painting them and I sent a battalion's worth to Rob Goodyer to be painted as a garrison battalion. As I had no marching command at that point I sent some Swedish command.
Not a cardinal sin as the Russians adopted the turned back coat tails eventually and for the purposes of practicality, some of soldiers in the field probably did so anyway despite regulations. 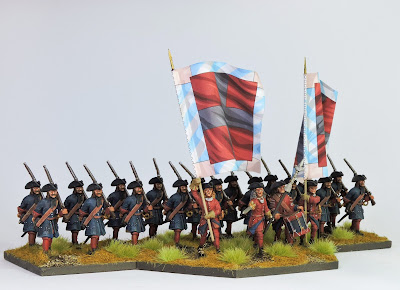 As I had no idea whether garrison units carried colours or not I decided to use one of the attractive Streltsi flags that Clarence created to flag them up!
Here is the attractive result - a nameless garrison battalion which will first take the field at Tactica 2017....

Which as I add this postscript I can confirm it did. Its war was realtively unspectacular but it did fire in anger at the Blue Wasps which stung the massive Russian-Polish force! evidence below..