Eight days (15 turns) into the campaign, we are at the 25% mark. It has been an eventful journey so far and the Royalists are no further than four miles from the mouth of the Gambia River. They have had two encounters with Berber pirates coming off worst in the first encounter and being mere spectators to a French victory in the second. Their alliance with the King of Kombo has resulted in the loss of that monarch in capsized shallop which flipped in heavy weather during a hazardous troop transportation to the Mandinkan lands on the north shore of the river.

They have battled disease and several damaged ships leaving them, most of the time with a single operational man o' war from a squadron of four. In a sharp action with two Parliamentarian merchants coming down river, they captured one and sunk the other but this resulted in the loss of many men and some valuable ship's boats. 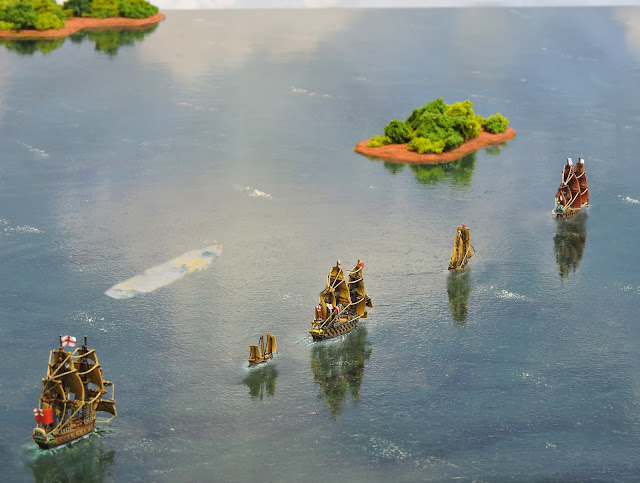 The squadron is now dispersed with three damaged or unoperational ships based at a careenage on the river's south shore and Swallow, with Rupert aboard, now conducting the transportation of the Komban king's small army to prosecute counter-insurgency operations on the north shore.

Rupert was hoping for a resupply of water from the Kombans and their direction to timber supplies on the north shore to enable vital repairs to be made to his hobbled flagship Constant Reformation but so far, neither has been forthcoming.

After weathering a severe storm and striking up an impromptu alliance with a passing French privateer, an opportunity has arisen to attack a stranded Republican slaving ship which has run aground on a shoal and is unable to free itself. Facing stern-on to the attack, its crew has placed a floating boom across its position to prevent outflanking. The waters are treacherous and a risk of grounding threatens the smaller boats being used by both sides. A ship's gun is also in position on the seward side to dfeter attackers. Many of its crew are now in small shallops sailing out to deter the Prince.

Rupert has force marched Komban musketeers and some of his own men across land to bring the stranded ship under fire from the shore whilst he and the French attack from the seaward side.  Everything is set for a dangerous but potentially profitable piece of privateering. Spare a thought for the enslaved African people trapped aboard the stranded ship and treated as a secondary consideration by both sides.