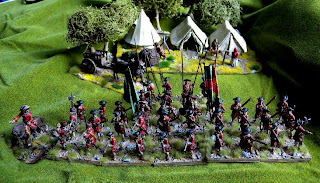 David O'Brien - First off let me apologise for the poor quality of my photography, fortunately my painting is better than my photographs.
This project started out a while back with a discussion between Barry Hilton and myself regarding many of the small actions fought during the period from the 1660's to the 1720's which we thought would look better by using much larger battalions than the normal 18 figure size which we use under our preferred choice of rules Beneath the Lilly Banners which Barry had also written.
I have always been interested in the Monmouth rebellion and the battles fought around Tangiers and on finding out that the 'Tangiers' regiment also known as Kirke's Lambs fought in both theatres I thought they would be my first regiment on the painting list and the finished product can be viewed above.
For those interested in finding out more about this famous regiment I would recommend having a look at this great site: http://www.queensroyalsurreys.org.uk/1661to1966/tangier/tangier.html
Around the same time as Barry and I were discussing this project Clarence Harrison also asked us to play test his rules Donnybrook which are written for skirmish actions in the same time frame so I thought this was a good opportunity to kill two birds with one stone by basing all the figures singly for the skirmish games but also using these great slot bases from a company called Warbases for fighting the larger unit battles. 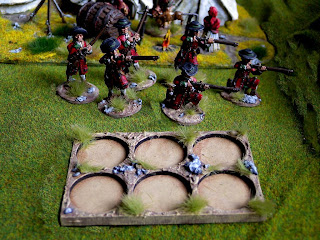 These bases are great in that they allow you to easily change your unit from forming line to marching in column of march. 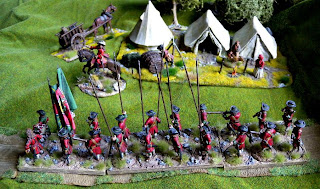 This photo just shows three of the six bases which form this unit and I think the three deep line gives a good impression of the deep formations used in this period.
For Donnybrook this battalion breaks down to give me a choice of five units which can be seen in the photo below but you only need four units in a basic Donnybrook game. 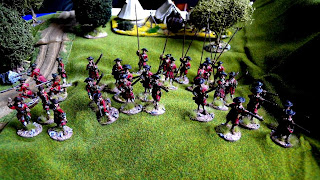 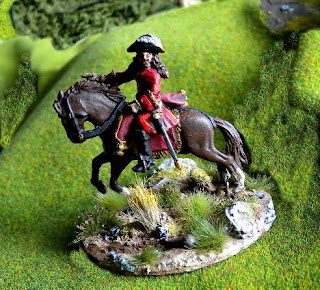 The regimental Colonel now becomes the Hero and leader of my faction. 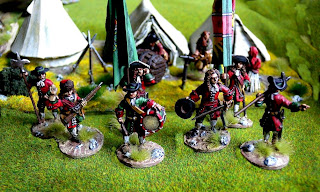 These figures now become the characters in my faction and you can take one for every unit in your faction. I can have a choice of an ensign, an officer, a drummer and a choice of three sergeants, the grenadier and the two figures with halberds. All of these figures have different abilities in Donnybrook which either improve shooting, moving and changing formation, helping in combat or boosting morale and each faction has a different variety of characters to choose from. 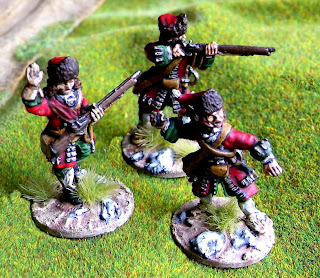 This is a small unit of grenadiers which is the next upgrade to an elite unit, they get bonus' for morale and shooting ability using their grenades but their small size means they have to be used carefully as they can be destroyed by larger units of poorer quality troops.
In my next post I will show the opposition for fighting in Tangiers.
Share Share on Facebook Tweet Tweet on Twitter Pin it Pin on Pinterest
Back to The League of Augsburg