by Barry Hilton January 15, 2014
In the beginning
To fully understand the British military tradition we could journey back into prehistory and explore the warlike island tribes and their struggles against waves of invasion and migration from continental Europe. This piece however is more concerned with the evolution of the Redcoat from the time when men from the four nations began to fight together as opposed to facing each other across a battlefield. There was no British Army until the Act of Union in 1707 but before that date the different nations were already standing shoulder to shoulder. The years between 1670 and 1704 provide the scope for this article. The first tentative steps of the baby in red were taken handling local rebellions in the 1670s. By 1704 at a little village in Bavaria, the child had learned to walk upright and proud. He was also capable of giving some of the bigger kids in the schoolyard a good kicking.
The sun appears to come up over the British with their contribution to the victory over the French army at Blindheim. The name has been anglicized and of course immortalized as Blenheim. Their fighting reputation was consolidated through Marlborough’s campaigns. What is not obvious is that by the time Blindheim was fought, Marlborough was 54. Napoleon and Wellington were both 45 at Waterloo and Bonaparte was dead at 51. Marlborough had already lived a lifetime as a soldier in an era when his troops were learning their craft and mostly on the losing side. The army appears to begin recording its matches with the first significant win at Namur in 1695. Before that date, epic battlefield performances were racked up at home and away. These in my experience, are not commonly known about even in the wargaming community. The reasons why are not immediately obvious but may become clearer as you read on. It is to these earlier encounters that we must look in order to understand the desperate struggles which marked the bloody birth of the British Army and its reputation.
Their’s is not a story of instant success. Many hard lessons had to be learned and the context in which the Redcoats fought must also be explained to fully understand why the British projection of history often rankles with foreign readers and writers. Throughout its history the British Army has partnered with forces of other nations to achieve political and military objectives. Often these foreigners have provided the money, materiel, the generals and the majority of the fighting troops yet British writers and commentators often appear to air brush the contribution of others out of history or minimize it at the least. 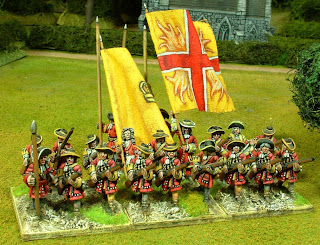 This tendency to goal-munch would clearly irritate we Brits (witness some modern American re writes of WWII and the resentment these engender) so the discomfort of Dutch, Danish and German scriveners is understandable and somewhat embarrassing to the less xenophobic of the island peoples. The British were increasingly significant contributors to continental wars of that there is no doubt. These wars were often against France, the biggest and baddest kid on the block. They were never, at any point the most numerous contingent although English written sources would have us believe that they were the architects and creators of most victories and relatively blameless when Coalition or Aliance armies were defeated. This trend continued long after the period and Fontenoy in 1745 is a great example of finger pointing at the Dutch (again).
Britain is a small country. Throughout history its army has been relatively modest in size with the exception of the world wars. This is not an issue of population but rather more to do with limiting the power wielded by any individual or group who might be in control of such an entity. The army evolved from the strife of the Civil War and Parliament with its new found power was understandably reluctant to build and fund apparatus which might, in the wrong hands, relieve it of that power and influence.  From its birth until modern times the British Army has struggled to receive the financing necessary to recruit, equip and fight effectively.
This makes its performance all the more remarkable. Often the Army’s achievements have been won on a shoestring. After the restoration of the monarchy in 1660 the cash strapped King was not best placed to maintain a massive military machine. British soldiers of all ranks tended to venture abroad to ply their trade. Service with the Dutch, Imperialists, Russians, Swedes and French was common. The most senior regiment of the line is widely accepted as having started life Swedish and then French service. The Royal Scots were formed as Hepburn’s Regiment during the Thirty Years War. A smallish Royal Army grew in England from 1660 including 3 regiments of Foot Guards (later to be known as Grenadier, Coldstream and Scots) and no more than 6 regiments of Foot. A modest force of cavalry was also maintained. This army fulfilled duties in far flung locations of crown interest including the American Colonies and North Africa not always with much success. During the late 1670’s religious strife at home saw it in action against its own people.
Share Share on Facebook Tweet Tweet on Twitter Pin it Pin on Pinterest
Back to The League of Augsburg