by Barry Hilton January 29, 2014
A walk through the fixture list.
Like any good team the Redcoats learned through experience. They clawed their way up the rankings from the position of joke outfit to become the most formidable infantry in Europe by Napoleonic times. The pre-eminent military powers of the late 17th century viewed them with some disdain. Although regiments in foreign-service were well thought of, indigenous units were viewed less than positively. In 1688 their new Dutch allies had little that was good to say about them. In appearance, demeanour and discipline they were held in near contempt. Getting match fit was hard yards for the men from the islands. Their road to the top started here and 13 post match reports track the journey from zeros to heroes.
22nd June 1679: Battle of Bothwell Brig.
A small but by comparison well equipped Royal Army comprising around 1,500 Foot, dragoons and artillery faced 4-5,000 armed civilians. These religious dissenters called Covenanters put up a token resistance defending a bridge across the river Clyde near Hamilton. It cannot be described as a formal battle rather more as 17thcentury riot control. The army was commanded by the Duke of   Monmouth. The mettle of the soldiers would not have been sorely tested in this encounter. After about 1 hour of skirmishing the bridge was forced and the Covenanters routed. John Graham fought with the Royal Army.
Match verdict:  An easy home victory against poor quality opposition with little war craft required. They were better equipped and slightly more coordinated than the comedy turn enemy and were never seriously under pressure. Nothing significant can be garnered from this result.﻿﻿

1680-1683 Tangier
Tangier was in the possession of the crown from 1661 as part of the new Queen’s dowry. It was a problematic outpost from the minute of hand over by the Portuguese who were ecstatic to be shot. Between 1680-83 a force of around 3,000 battled constantly and fiercely to keep the Moors and Berbers from over running the city. Dumbarton’s (1st), the Tangier Regiment, a composite Guards battalion and Trelawney’s (4th) all fought against the numerous and dangerous Moroccan tribes before the city was abandoned in 1684. 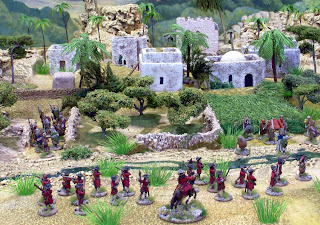 Match verdict:  Very tricky away fixture which gave the boys priceless experience in a pressure cooker environment. Although they scored early, the long period of extra time resulted in no glory. This game toughened up those who turned out at Sedgemoor in ‘85 and so we must take the long view. Exposure to those fit African lads with their individual flair and speed sharpened the skills of the Reds when they next turned out at home against a rebel rabble from Somerset.
5/6th July 1685: Battle of Sedgemoor
The very same Monmouth who had protected the kingdom from rebellion, rebelled himself in 1685. His army of volunteers from the West Country led by a small core of professional officers was routed in a night time – dawn action. The Royal Army was commanded by the Earl of Feversham but the victory is sometimes attributed to his second, John Churchill. The army had 2 battalions of the 1stFoot Guards, The Coldstream Guards, Dumbarton’s(1st), Kirke’s (2nd) and Trelawney’s(4th), 2 regiments of Horse, 1 of dragoons and around 10 guns. The enemy army was about twice the size but less well equipped. This could have been a disastrous outcome for the fledgling army but the night attack was un-coordinated and Dumbarton’s Scots sentinels reputedly spotted the bumbling night advance from their glowing slow-matches thus raising the alarm in time.
Match verdict: A workmanlike home victory against second class opposition. The Redcoats relied heavily on veteran Scots players who’d seen plenty of action in their long careers. Valuable lessons were learned and positive developments resulted. High profile fans including an upper class hooligan named Jeffries, went on the rampage after the match. His thuggish behaviour did much to take the shine off a well won victory for the King’s men. The anti-Catholic press had a field day! 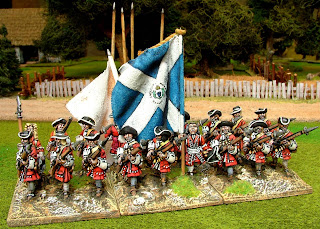 25th August 1689: Battle of Walcourt
This encounter battle in southern Belgium displayed signs of what the maturing British infantry were capable of.  An advanced guard of around 500 men under Colonel Hodges held up advancing French forces long enough to allow the main army to come up and deploy. This detachment fell back in good order after a further stand against the advancing enemy. In the main battle, British units including the Coldstream Guards were in the thick of the action and performed steadily and aggressively. Their fighting ability was noted by their Dutch masters as was their particularly shabby and un-soldierly appearance!
Match verdict: They handled the novelty of their first big European occasion well. Some star performances from individuals and regiments. The Redcoats were strong defensively and evidenced great stamina. In sticky moments they were prepared to dig deep for that extra reserve of guts. They showed lots of aggression in the counter attack and demonstrated a few shock moves for the enemy. Overall this was a surprise away win with more than a little help from their continental allies!
27th July 1689: Battle of Killiecrankie
A well trained and equipped Williamite Army of just under 5,000 Foot and about 200 Dragoons was attacked and cut to pieces by a Highland charge which may have lasted less than 5 minutes at the Pass of Killiecrankie near Pitlochry. The very experienced Major General Hugh Mackay was in command of the force which included Mackay’s, Ramsay’s and Balfour’s regiments of the Scots-Dutch Brigade, 2 newly raised Scottish regiments; Leven’s (25th) and Kenmuir’s and a solitary English regiment; Hasting’s (13th). The action was a complete disaster with casualties running to over 1,000. The army was not trained to deal with the fast moving, close combat tactics employed by the clans. It could be argued that the battle was an aberration, nevertheless serious flaws in defensive capability resulted in Mackay being credited with the invention of the socket bayonet as replacement for the almost useless plug variety. 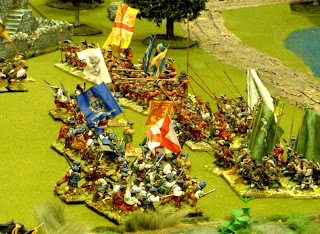 Match verdict: A whitewash! The manager appears to have totally underestimated his opposition and must shoulder all of the blame for his poor judgement on the day! Surprisingly the Board did not sack him and their decision was vindicated over a couple of seasons when he came good in both Scotland and Ireland. Although the majority of the army broke and fled, two regiments stood their ground withdrawing in some semblance of order. Ironically one was the newly raised recruits of Dave ‘Lucky’ Leven so what can you infer from that if anything?
21st August 1689: Battle of Dunkeld
After the disaster at Killiecrankie a newly raised regiment of staunch Covenanting men raised by the Earl of Angus (26th) garrisoned and held the small cathedral town of Dunkeld on the River Tay about 15 miles from the disaster site. They were attacked by 4,000 highland clansmen and Irish regulars. The battle was a day long, house to house, hand to hand combat resulting in the almost complete destruction of Dunkeld. The defenders desperately hung on with great courage. Dunkeld was not a field engagement but the stubborn streak of the Redcoat at bay was demonstrated to the full against a ferocious if disorganized opponent. Visitors can still see the bullet marks in the cathedral walls to this day. 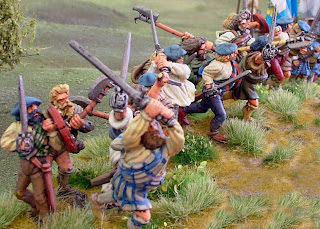 Match verdict: Surprise result of the season. Strong defensive work by the Reds resulted in a shock home win in the dying seconds.  Angus’s giant killers humbled the odds on favourites for silverware who were somewhat hampered by the recent demise of their star player- manager ‘Bonnie Johnnie’ Graham. His Irish replacement Colonel Cannon should clearly have been fired before the match. The young Colonel Cleland (27) who fell in the first hour and his deputy Major Munro showed huge appetite in the pressure cooker cauldron of the battle. They were the architects of victory.
1st July 1690: Battle of the Boyne
The Boyne is much misunderstood and often deliberately distorted for political and sectarian reasons. The Williamite Army containing about 20,000 British and 15,000 foreign troops defeated the Jacobite Army of about 20,000 British and 7,000 foreign troops. The majority of the fighting and winning on the Williamite side was done by Dutch, Danish and French Huguenot regiments. Casualty returns evidence this clearly. The fighting and losing on the Jacobite side was mainly by Irish infantry. Their cavalry however displayed outstanding dash and skill and proved themselves to be of the finest quality in combat. The Boyne cannot be described as a test of the Redcoat’s skill at arms as very few regiments of British infantry were heavily engaged. The following regiments were present Douglas’s (1st), Kirke’s (2nd), Trelawney’s (4th), Lloyd’s (5th), George Hamilton’s (7th), Beaumont’s (8th), Steuart’s (9th), Hanmer’s (11th), Brewer’s (12th), Hastings(13th), Meath’s(18th), Erle’s (19th), Bellasis’(22nd), Gustavus Hamilton’s (20th), Herberts (23rd), Dering’s (24th), Tiffin’s (27th), Lisburns, Drogheda’s, Mitchelbourne’s, St John’s and Ffoulkes.
Match Verdict:  The partisan press really went over the top with clichésuperlatives which belied the true outcome. It was a solid home victory but all the chances were created and scored by top class foreign  stars! The management team was also foreign and they played our home boys in supporting positions for most of the match not considering them reliable enough in the critical areas on the field. The domestic game is really getting ruined by all these European big money imports who’ve clearly taken advantage of the Bosman ruling to exploit our national sport! 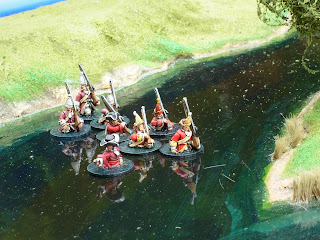 12th July 1691: Battle of Aughrim
Aughrim was a grim and bloody struggle between a largely British Williamite Army of around 22,000 and a slightly smaller British Jacobite Army. It involved the Williamites attacking over very difficult boggy terrain against a well-positioned enemy force on higher ground. There was a high proportion of hand to hand combat. The battle was very hard and close fought. The outcome was contingent on several critical events such as the freak death of the Jacobite commander from a stray cannonball which beheaded him and the single handed reconnaissance of an almost impenetrable bog by General Hugh Mackay thus enabling a decisive flanking attack by cavalry. Mackay retrieved his honour as a top quality soldier after the debacle of Killiecrankie. British regiments present includedKirke’s (2nd), Lloyd’s (5th), George Hamilton’s (7th), Steuart’s (9th), Brewer’s (12th), Meath’s (18th), Erle’s (19th), Gustavus Hamilton’s (20th), Bellasis’(22nd), Herbert’s (23rd), Tiffin’s (27th), Creighton’s, St John’s, Lisburn’s, Ffoulkes and Cutt’s.
Match verdict:  League winning victory against a good quality opponent and a ticket to European competition in the 1692 season. Coach Mackay was on the park with the players from the kick off although manager Ginkel played a less dynamic role in guiding his side to glory. This ‘up and at ‘em’ approach from the British including their leaders is beginning to mark them out as something a bit different. 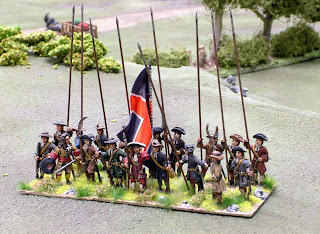