by Barry Hilton February 05, 2014
Away matches….
23rd July 1692: Battle of Steinkirke
This battle more than any so far showcased the fighting spirit developing in the British regiments. A surprise dawn attack launched from difficult terrain took their French opponents completely by surprise. The vanguard of British battalions although somewhat slow off the mark and disorganized in their advance, ground their way forward against increasingly numerous, well organized and top quality opposition. Only when they ran into Louis XIV’s Maison du Roi did the wheels come off the team bus. Without support from their own army which was riven with factional politics and petty jealousies, the hapless heroes in red were butchered slowly but surely as they retraced their steps in retreat. The gallant Mackay fell at the head of his brigade. A comment attributed to William of Orange at the time “The English like to fight,  let them have a bellyful” cannot be verified and is possibly the construction of a biased press corps. Known to have been in action at the battle were the 1stFoot Guards, Orkney’s (1st), Babbington’s (6th), Fitzpatrick’s (7th), Buchan’s (21st), Leven’s (25th), Angus’s (26th), Mackays, Graham’s & Lauder’s (Scots Dutch) and Cutt’s regiments. These 12 regiments including seven Scots, would account for about 8,000 Foot or roughly half of the attacking force. Both General Mackay and the Earl of Angus fell at Steinkirke.
Match verdict:  Over ambitious and naïve tactics against enormously experienced continental opponents. Out played and not fit enough for this level of competition. Definitely the blame must be laid at the manager’s feet for the wrong tactical decisions. He showed poor judgment in supporting Team Red in their foolhardy but gallant advance into the teeth of a giant and extremely dangerous opponent. I mean, the French team was immense and experienced, what was he thinking! Orange should have received his marching orders for this one. 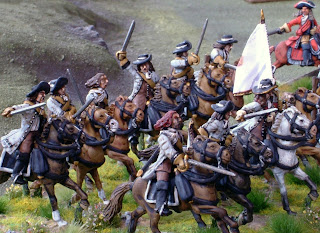 29th July 1693: Battle of Neerwinden
Neerwinden was a massive meat grinder of a battle. A Grand Alliance army of 50,000 had taken up a defensive position to prevent further advances into Flanders by the French. The British infantry held almost all of the critical frontline positions. The plan was anchored on holding several key fortified villages Laer, Neerwinden and Rumsdorp. Frontal assault was the only method open to the French army of 80,000. The villages were swamped by a tsunami of attacks which came thick and fast for the entire day. Gradually each was to succumb to the onslaught although the defenders offered ferocious resistance and caused heavy losses. With the line cracked in several places the Allies broke in spectacular fashion and quit the field. This was William’s worst defeat at the hands of the French.  Hard fighting British battalions included 2 battalions each from the 1st Foot Guards, Coldstream Guards, Scots Foot Guards and Orkney’s (1st). Single battalions from Selwyn’s (2nd), Churchill’s (3rd),Trelawney’s (4th), Fitzpatrick’s (7th), Tidcombe’s (14th), Derby’s (16th), Erle’s (19th),Buchan’s (21st), Leven’s (25th), Ferguson’s (26th), Mackay’s, Lauder’s & Collingwood’s also fought. In total the British turned out and impressive 21 battalions or around 14 -16,000 infantry.
Match verdict: The Alliance failed to deliver on the big occasion. A very promising start turned into a wipe out under a welter of goals from star studded opposition. The British produced a very tenacious performance in the hottest spots on the battlefield for much of the day. Alas they just didn’t have the legs to resist the Maison du Roi which steamrollered through the centre to deliver a Gallic coup de grace. The boys were buried and took a season to recover from this mauling. A real growing up experience playing in top flight competition. 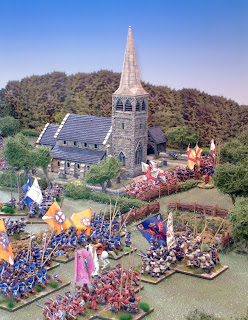 From 2nd July 1695: The siege of Namur
The first honour carried by many British regiments despite participation in the previous battles mentioned. Having captured Namur from the Dutch in 1692 it was the turn of the French to be besieged in 1695. This very active and bloody siege cost 12,000 casualties to the attackers and 8,000 to the garrison which eventually surrendered. 14 British regiments took part including the 3 Foot Guard units, Orkney’s (1st), Columbine’s (6th), Fitzpatrick’s (7th), Beaumont’s (8th)  Tidcombe’s (14th), Leslie’s (15th), Hamilton’s (20th) and Maitland’s (25th). Several were involved in storming the breaches and suffered commensurately.
Match verdict: The tide begins to turn for the Redcoats as they taste victory in the face of stiff resistance. This close quarter infantry slugfest was all about bayonets, blades and grenades. The lads were not shy when it came to getting stuck in. There was lots of hard tackling and prodigious use of the magic sponge at full time to get them match fit for the next big occasion. 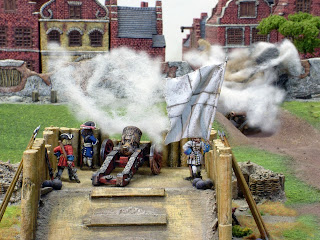 1704: The Battle of Blindheim
An Alliance army co-led by Marlborough and Prince Eugene of Savoy faced the French under Marshal Tallard on the north bank of the Danube. The forces were arrayed on either side of a small river called the Nebel. The Allies attacked with the British concentrated on the left and left centre. The Redcoats made repeated attacks on the village of Blindheim and were bloodily repulsed. Their persistence paid off and the village was taken at bayonet point, street by street with many thousands of French taken prisoner after hours of fighting. Blindheim was a stunning victory for the Grand Alliance and saved Vienna. British regiments present 1st Foot Guards, 2 battalions of Orkney’s (1st), Charles Churchill’s (3rd), Webb’s (8th) North & Greys (10th),  Howe’s (15th), Derby’s (16th), Frederick Hamilton’s (18th),  Rowe’s (21st), Ingoldsby’s (23rd), John Churchill’s (24th), Ferguson’s (26th) and Meredith’s (37th).
Match verdict:The boys done good!  They finally got to lift the big trophy in a showcase away fixture although the Dutch, Prussians, Danes and the Austrians also had one hand on the cup. The victory belongs to the double-headed management team and the lads! (with a bit of help from a few flash foreign sorts). The British infantry are no longer considered an inferior species and can stand tall against the best in Europe. They want to thank all their fans for sticking by them through the tough times Come on you Reds! 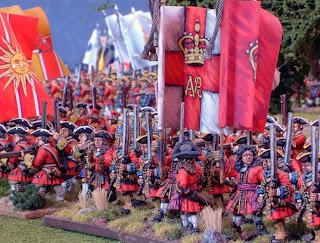