by Barry Hilton February 12, 2014
The concluding part of the series provides some final perspectives on the early British Army.
Debugging the regimental code
For those with an eye for detail you may have picked up that regiments listed in the battle summaries seem to change names. This is because the numbering system came to the army much later than the period in question and up till the mid- 18th century regiments were known by the name of their colonels. These changed frequently with promotions, deaths, cashiering and retirement! To get full wargaming value out of the units you may wish to model I have noted the later number in the line if the regiment survived into the period of that system of identification. Those regiments without numbers were disbanded at some point after the period.
Weapons and changes
This was a time of significant transition in terms of weaponry. At the beginning of the period regiments contained between 500 and 1,000 men in 13 companies. Each contained a mixture of musketeers and pikemen in a ratio of between 3 and 5 to 1. This changed over time as the pike was phased out although animated debate still rages over whether the British carried pikes for at least some time during the War of the Spanish Succession 1701-1714. Musketeers began the period carry matchlock muskets and powder bandoliers with apostles and finished by moving towards flintlock muskets and ammunition pouches. British infantry fire tactics evolved to the so called platoon firing system during the period after 1700.
Marching on
Following the War of the Spanish Succession the tale of the Redcoat is signposted with many highs and a few lows. Their reputation stands the test of time and history is favourably disposed towards their performance which has lasted into the khaki phase and on into the modern era. Their beginnings are a truly fascinating and under explored phase worthy of interest and filled with gaming opportunity. The infant’s survival was indeed a desperate struggle but he grew into a man of distinction with a career packed full of stirring tales and excitement to which pages continue to be added. 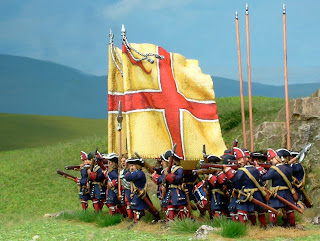 Red Coats
The red coat is synonymous with British infantry but usage did not become universal till well into the period. As colonels had a lot to do with the clothing and management of their regiments, coat colours varied widely during the period 1670-1700. Many British regiments used red but the shade would be variable. Highly unlikely would be bright scarlet as this shade was too expensive to produce. Red varying from mid brown through brick, washed out rose, ‘blusher’ red-pink to a deeper, darker red is far more likely. Officers who could afford more expensive clothes may have a more recognisable traditional mid to bright red. The British also used blue for a few regiments including marines. Grey was relatively common particularly for newly recruited units as it was cheap. This might be of varying shades. Regiments with Royal connections wore cuffs, waistcoats and breeches in blue. Cuff colours were the most obvious distinction between units of the same colour coat. Common were yellow, greens, buff and red. Less common was black, orange-tawny, purple and grey. Prominent amongst Scots regiments was white or off-white, few other colours were used by them. 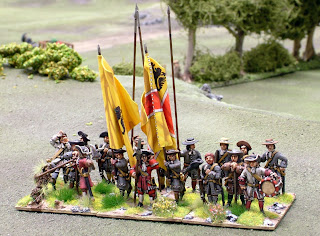