by augsburgeroberst July 02, 2020
This is the first time I have refought a historical battle ship for ship and also, my first blogged battle from the 1st Anglo Dutch War.  I have made a couple of small amendments to the rules to simulate the Dutch preference for boarding during the earlier period.

The Battle of Livorno (Leghorn) was fought between the English Commonwealth and Dutch Republic, so it's a real Republican ding dong. It took place just off the harbour mouth of the attractive Tuscan city of Livorno, it was, a resounding Dutch victory. It was a component of the 1st Anglo Dutch War which was chiefly triggered by English jealously over waxing Dutch commercial dominance in terms of trade and transportation by sea.
Read about a little of the background on Wiki here: Battle of Leghorn and also here:Battle of Livorno
The battle was fought in two parts. If the two English squadrons had combined, each side would have had roughly the same number of ships. What actually happened was that the Dutch defeated the first six English ships before the other nine arrived. These were then defeated in turn. 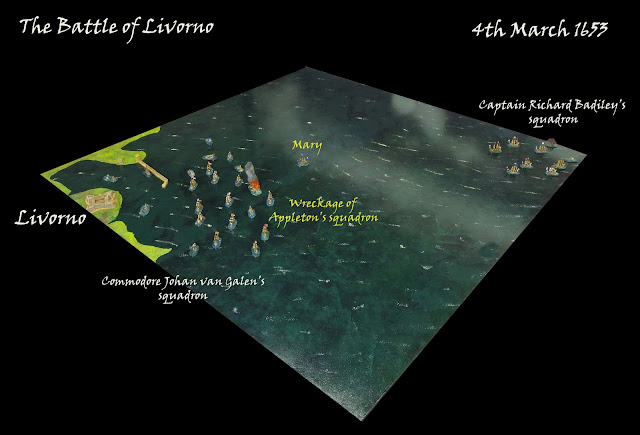 This scenario starts with the 'one the got away' Mary, a 30 gun converted merchantman,  fleeing the scene of destruction to link up with Captain Badiley's reinforcing squadron. The Dutch are still superior in number however, in the scenario conditions, all their ships have taken some damage (this was randomized with a set range) and all, had to check to see whether they retained first broadside bonus capability.
The English have the weather gauge but not the numbers. The Dutch begin the battle inshore and entangled in the wreckage of  Appleton's English squadron which they have just destroyed.
The Dutch Fleet

In part two I will detail the AAR. The game lasted eight turns with furious action and an outcome achieved between Turns 3 and 8, the six turns during which it all happened.

The table is 4 x 4 and in total there were 25 active ships. I subdivided each command into two and three groups of five respectively for initiative and activation purposes which worked very well.