The Battle of the Boyne 1st/12th July 1690. Remembered as a wargame

by augsburgeroberst July 11, 2020
A welcome email from my friend Peter A, reminded me of the significance of the date (days and dates now seem to meld in this Covid world, I got up early this morning thinking it was a work day!). How could I have overloooked this anniversary, particularly as I live in the West of Scotland?
Whether the Old Style or New Style date is quoted, this weekend marks the 330th anniversary of a battle the significance of which has remained prominent in British consciousness for good or ill, to this day. A Stuart family disagreement or, the birth of Parliamentary democracy? Choose your truth, that's what we do these days and afterwards we find some facts to back it up.
This post is not a rehash of the history which I am certain every visitor to this blog is very familiar with. It is a little photo journey through the amount of wargaming time and effort I have dedicated to recreating, exploring, commenting on and attempting to understand this battle.
Putting the Boyne in context, in the span of a few days in 1690 three important battles took place, two of which King William's forces decisively lost. Fleurus was a resounding defeat for the Prince of Waldeck whose army was routed in the Low Countries by the tactical master Le Duc de Luxembourg.
Beachy Head saw the combined English and Dutch fleet under Torrington and Evertsen vanquished by the French under Tourville. Panic spread in England. Meanwhile, on the banks of a little river in the east of Ireland...... The one we all have been programmed to remember is the struggle  just west of Drogheda and here it is...
After visiting the battlefield with Clarence a few years back we chose the crossing of the Dutch Guards as the theme for the cover of The War of Three Kings.
Our pdf guides to the units which fought at the Boyne has always been a popular item and we are now exploring a revised version in book form. 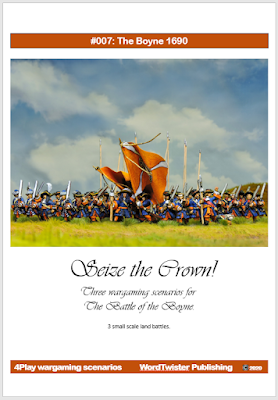 The recent 4Play concept has its very own Boyne scenario  - #007 Seize the Crown which has turned out to be the most popular of the whole series.
I first displayed the Boyne at Partizan in Kelham about 2-15 years ago (memory fading on that a little).
That was my favourite iteration of the wargame and the terrain for it plus, a shot of the action, can be seen below. 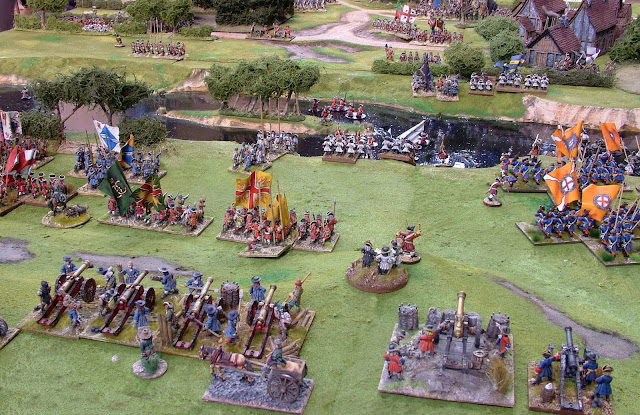 My inspiration to refight the battle as a public display game came from Duncan Macfarlane's pictures of the game in Wargames Illustrated run by men who later became my friends - the so called Teesside Triumverate of Graham Cummings, Gordon Maclean and the lovely and sadly missed Lee Maxwell. Their fantastic game lit my creative fuse. I am sure many of you remember the pictures or may even have been lucky enough to see it in person. What a privilege.
Talk about spreading the word.. We even took the game to Historicon where Clarence and I put on a version of the crossing at Oldbridge on his lovely terrain. I shipped three boxes of figures in my luggage to Pennsylvania to run that game back in 2010? I think we won a prize at the show for best game or something. I still remember the massive old fella playing King James and wearing dungarees and a checked shirt with a CAT hat on.. not exactly a peruke but he was a helluva King! (And... I think his name was actually Jim!)
4Play games allowed me to get creative and compress vignettes of larger actions into 2 x 2 tables with 4 games turns. The Boyne got its chance with three scenarios 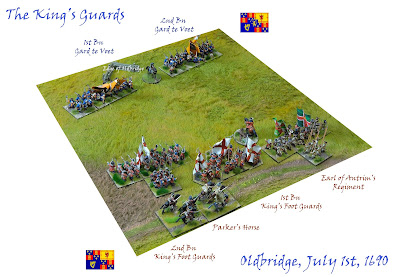 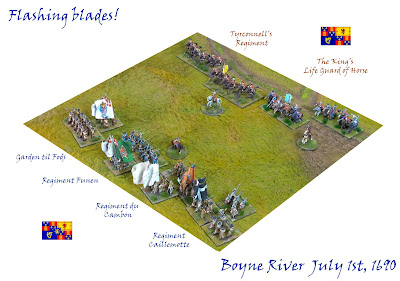 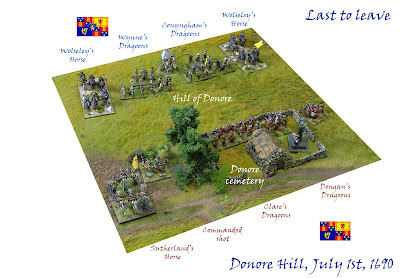 I never tire of gaming this battle. It presents an interesting challenge for both sides and is by no means a walkover game if the scenario is constructed properly.
This shot illustrates is of one a simple soldier whose efforts win or lose battles... not kings, generals or great lords. Appropriate to finish on a note that levels things out. Battles are delivered by ordinary men doing their best to obey somebody else's orders and lucky to receive some bread and beer if they survive the bloody day.
Thanks Peter for a timely and inspiring reminder. I may just pick up on this anniversary theme for various future posts. Enjoy the Boyne Remembered!
Share Share on Facebook Tweet Tweet on Twitter Pin it Pin on Pinterest
Back to The League of Augsburg