The Big One - The Texel AAR Part 1

It was with great anticipation that I got ready to throw the first dice in this scenario. It was in the planning for weeks. The largest number of ships I had managed to get on the table, probably stretching the limits of a 4 x 4 feet set-up. I had some question marks about how the rules might hold up in this larger context but actually, I needn't have worried. 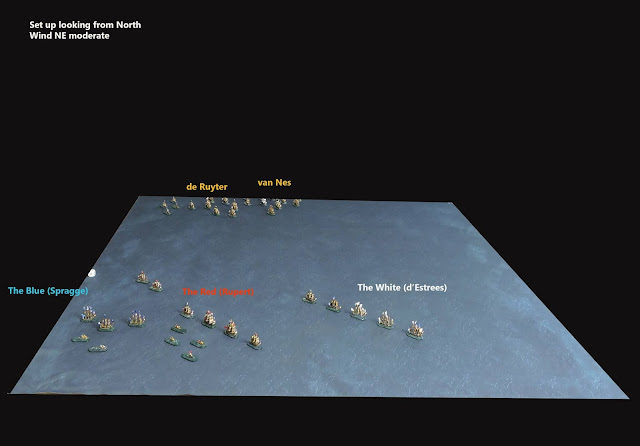 In two parts the battle report will unfold and as always, wargames take twists that could never be scripted. One thing is for sure, naval games never go to plan. The influencing factors of weather, wind and restricted arcs of fire mean it is best to go with the tide.
The wind was set from the north east (unlike the real battle of The Texel where it blew from the south east giving the emerging Dutch the windward position). Speed was set at moderate. Visibility was good.


The Dutch plan was to try and get between the van division of French ships and the central and rear English divisions. Admiral van Nes, leading the westernmost Dutch division in the 72-gun Eendraght had the task of isolating d’Estrées White squadron. The Allies wanted to quickly form a continuous line of battle and head south with the wind at their backs.

Turn 1 Form line of battle!
The Allied line began to take reasonable shape quickly although the French were well ahead and westward of the English creating a gap between the trailing units of the White and the lead units of Rupert’s Red. De Ruyter managed to get his division into a reasonable line heading north west whilst van Nes charged at full speed in a cloud towards the gap between the leading two enemy divisions.


Turn 2 Lone warrior
The gap widened between the slow and heavy English ships and d’Estrées although the lead ship of Rupert’s Division – Warspite, pulled away and dropped into the rear position of the French division.
The battle commenced when the frigate Constant Warwick opened up on the Beschermer, second in line of De Ruyter’s division. The English ship found its mark. Rupert unleashed his windward stationed fire ships through the gap and these bore down at full speed upon Van Nes' lead vessels. 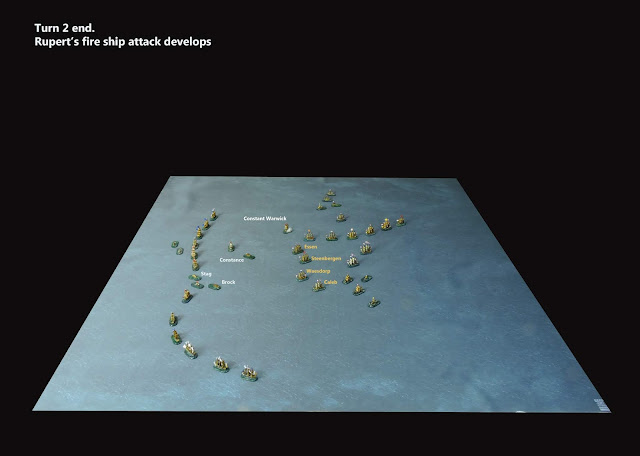 Turn 3 Fire attack!
As the wind speed dropped significantly Rupert’s fire ships were racing ahead and two, Brock and Stag were set alight and launched at the leading ships of van Nes’s division forcing the Dutch vessels to commence a furious fire to slow or destroy them. The nimble Dutch 4th rate Caleb nosed ahead of van Nes’s other ships cutting between Rupert and d’Estrées. Caleb loosed an astonishing salvo into the oncoming Royal Katherine tearing through her gun deck and causing massive loss of life which affected her ability to operate effectively for the rest of the action. The charmed Caleb sailed on, dodging between much larger enemy vessels and finding herself to windward of the enemy.


Constant Warwick’s reckless commander threw her amidst de Ruyter’s ships and the little frigate thumped shot into the Ridderschap killing her captain and many senior officers grouped around him. This greatly affected the morale of the veteran Dutch crew.


Alas, such risk taking was likely to attract attention and the Constant Warwick began taking heavy fire from two larger vessels; the 70 gun Spiegel and the 50-gun Beschermer. In less than twenty minutes she was reduced to a riven hulk with most of her men dead, wounded or overboard.


D’Estrées was executing a competent wide turn south attempting to bring his squadron's guns to bear on the pursuing Dutch vessels. The battle line, with gaps, had formed at least for now. 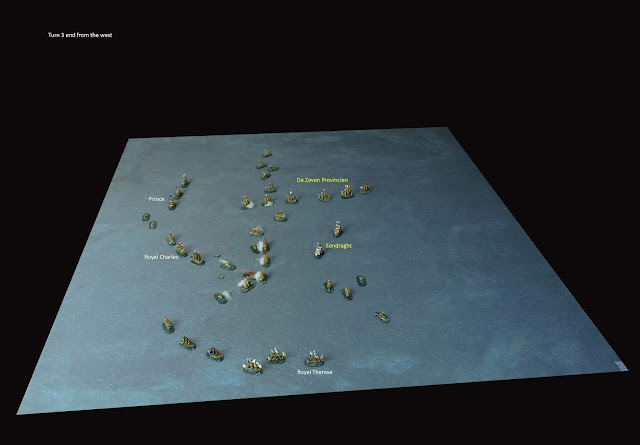 Turn 4 Where were you the day....
Van Nes’ leading four ships shot up the English fire attack and although Stag made it through the barrage it was fended off whilst the Brock exploded shortly after firing and the Constance was ignited by the weight of shot directed upon her. As this hasty thrust was snuffed out van Nes unleashed an almost identical wave of fire ships on the French. The Brand bore down rapidly on Royal Thérèse and at less than one cable length the 104-gun behemoth blew the incendiary ship to pieces scattering flaming wreckage over a wide area. The following French ships in taking evasive action created much confusion and the English Warspite, unable to slow down, rammed into the stern of Oriflamme.
Fighting spread as more ships came into range. 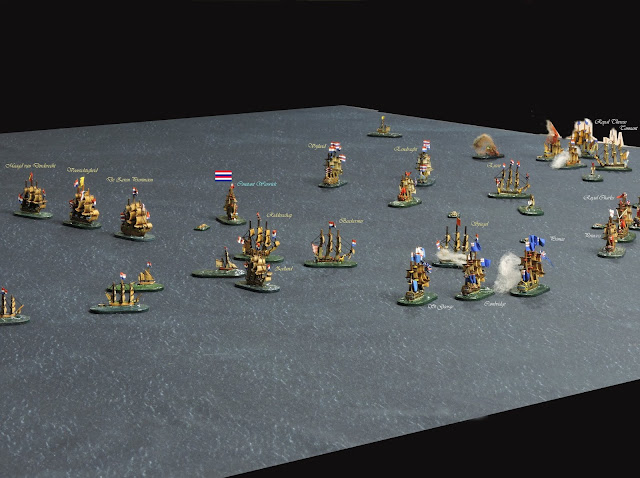 The gallant little Constant Warwick with almost her entire complement dead or wounded, struck to a longboat party from De Zeven Provinciën. The first ship to fall to the enemy. Balancing this loss, Beschermer received the full weight of Spragge’s flagship Prince. The Dutch ship holed and smashed, limped on carried by the wind but with little sign of life upon her.
Fate often plays its hand at the most unwelcome moment. As the 3rdrate Waesdorp slew across the bows of Rupert’s flagship Royal Charles her captain timed the broadside to perfection. The well- aimed raking fire tore down the length of the English vessel and wooden shards flew like missiles across the open deck. Prince Rupert, cavalier general, hero, uncle to the King, fell, pierced by multiple razor-sharp fragments. He was quickly covered, carried below deck and died shortly after in the great cabin. He was 53 years old.


Admiral Spragge aboard the Prince took command of the fleet. This calamity greatly discomfited the crew of the flagship although the news was concealed, a coded signal sent to Spragge to inform him of his new and unbidden responsibility. 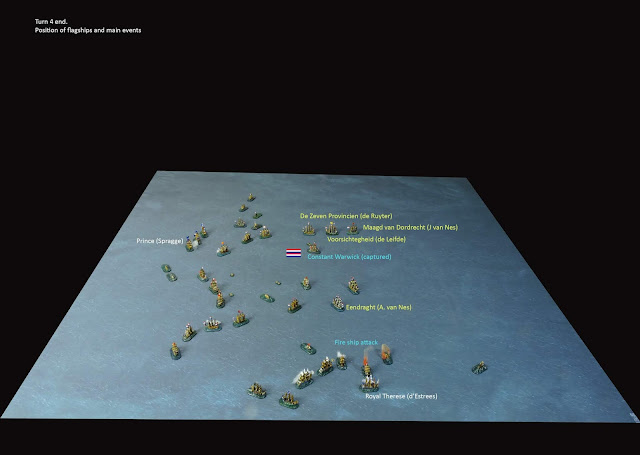 Turn 5 No fighting to the last Englishman!
Oblivious to the Royal calamity, the French squadron had problems of its own. To avoid the enemy fire ships the large units had slowed down in an uncoordinated manner causing the cumbersome Reine to smash into the stern of Tonnant damaging both. Tonnant had already rammed into the enemy fire ship Komeet although no flames transferred to the French vessel. Firing had tailed off temporarily however, Royal Katherine once more sustained unwelcome damage and any remaining resistance from the wrecked Beschermer was extinguished as the Cambridge swept by and delivered the coup de grace. The Dutch ship remained defiant but motionless and defenceless as both sides raced passed her.

Turn 6 Concord no more!
The Allied fleet was now operating in three distinct divisions, the rearmost of which was the Blue. It  received De Ruyter’s wave of fire ships two of which managed to get through and hit St George in the stern. Dolfijn was fended off but the flames from Bolwerk caught and the English ship was in real danger. At the head of the line the intensity of the action confounded the belief that the French would fight to the last Englishman. D’Estrées had marshalled his ships to bring a huge weight of fire on the enemy.


Spragge’s Prince bore down upon the Ridderschap now commanded by the first officer following the death of her captain. The 100-gun 1st rate hammered the Dutch ship and as her rigging and spars crashed to the deck the new commander was crushed beneath. The trauma was too great. The crippled Ridderschap struck having lost two captains in less than one hour.


Royal Thérèse, Maure and Oriflamme opened up on van Nes’ flagship Eendraght which could do nothing to respond. The one-sided affair saw the large Dutch ship brutally handled with more than half of her guns destroyed.  The other French 104 gunner Reine together with the 70 gun Warspite shredded the small Essen from bow and stern simultaneously. The lucky Caleb continued her charmed and glorious war by dodging enemy fire and meting out punishment to any ship unlucky enough to cross the muzzles of her cannon.

Turns 7 and 8 - Breathless
The wind dropped suddenly becalming both fleets which were carried by steady currents away from the shore. Firing continued unabated and the destruction of Eendraght compelled van Nes to abandon her for the proximate Vrijheid. Looking back, his beloved ship was being taken apart by concentrated and merciless French fire.


A few hundred yards away the stranded Essen could absorb no more and struck to Reine.  Without wind the ships continued to drift gently northward still thundering furiously where arcs of fire permitted. Much to the dismay of van Nes,  Eendraght finally seccumbed and struck to Royal Thérèse.
At the rear of the line De Ruyter’s De Zeven Provinciën had drifted into a position whereby its starboard guns bore upon St George. The English ship endured terrible fire which came on top of the recently finished trauma of dowsing the conflagration started by Bolwerk. 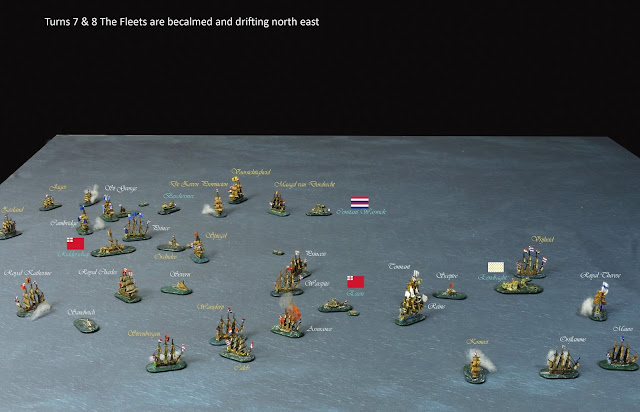 By the close of Turn 8 the Dutch had lost five fire ships, the Eendraght (72), Ridderschap (65) and Essen (50) captured and Beschermer (50) destroyed. The Allies had lost only the frigate Constant Warwick and three fire ships spent although several other large ships such as Royal Katherine, Royal Charles and St George were badly damaged. At my break the Anglo-French fleet seemed to have the advantage…..