The Cock of the North, Part Two

by Clarence Harrison March 08, 2018
Clarence Harrison - For the initial deployment, I placed the Foot of the Protestant Association in the village of Dromore, and left it up to the players to deploy their Horse and Dragoons as they saw fit. With Hamilton not yet on the field, Chris played Colonel Dominic Sheldon who had command of Tyrconnel's three squadrons of Horse, with Jim in command of Sir Neil O'Neill's two squadrons of Dragoons. As this was a game for new players, I decided not to introduce the ability for the Dragoons to dismount and used them as purely mounted troops. I also didn't use the rules for Fighting in Built Up Areas and treated the village as the collection of walls and impassable buildings. 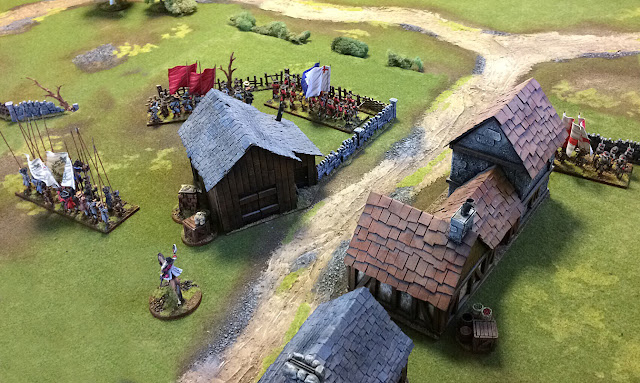 When rolling for Commander Ability, Chris generated 'Competent' for Hamilton and Tom rolled 'Plodder' for Rawdon...
'What's a Plodder, then?'
'A buffoon, probably surrounded by sycophants and yes men of equal incompetence...'
'Ah! Ok, I can do this!' 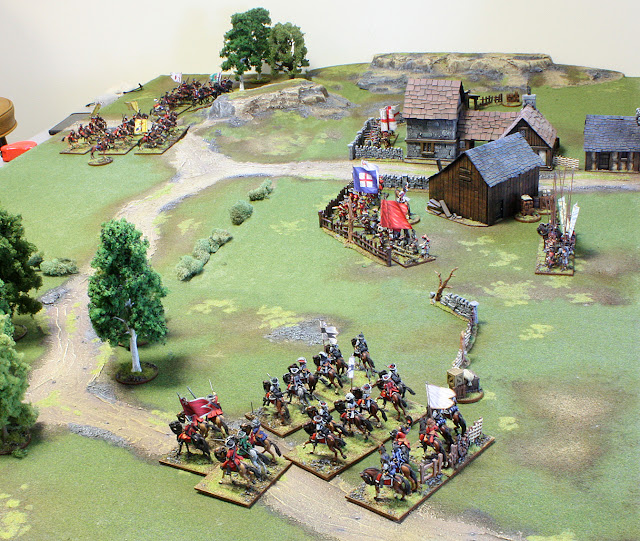 Wasting little time, Sheldon attached himself to the head of Tyronnel's Horse and ordered them to ride down the scum who refused to bend the knee to good King James! 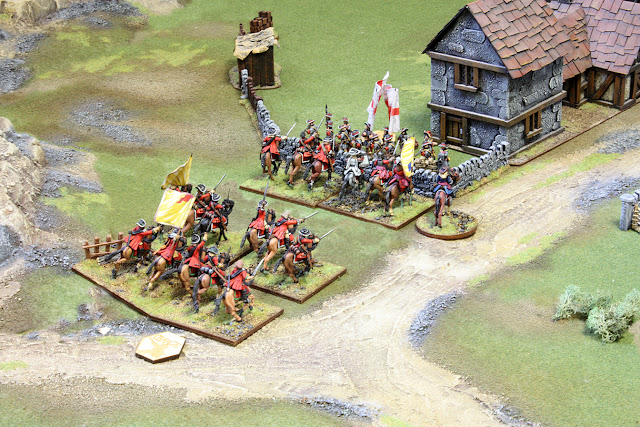 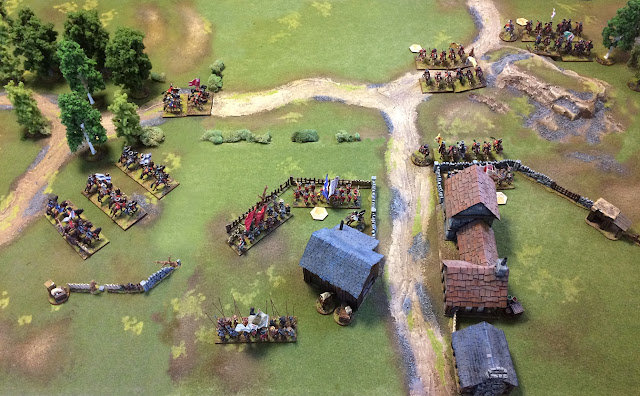 Sir Neil O'Neill, wily soldier that he was, decided to wait a bit and see how Sheldon fared before joining in the fray (to be fair, owing to poor dice rolls on the Command Allowance chart, but it DID happen three turns in a row...) 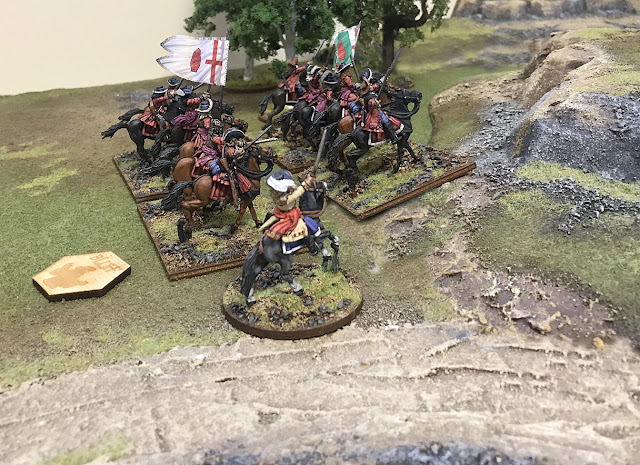 'Right! I'm documenting your tardiness for Hamilton (and for the blogs)!' 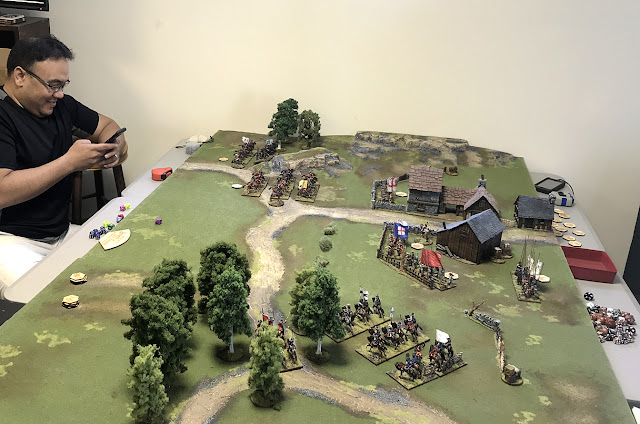 Thomas managed a round of shooting with a First Fire Volley that weakened the first squadron before it's charge and managed a draw on the initial clash of swords and bayonets. Horse are much weaker in successive bounds if their charge fails to break their opponent and despite the second squadron piling in for support, Tyrconnel's Horse were forced to withdraw from the fight to a rousing 'HUZAAH!' from the Protestants. 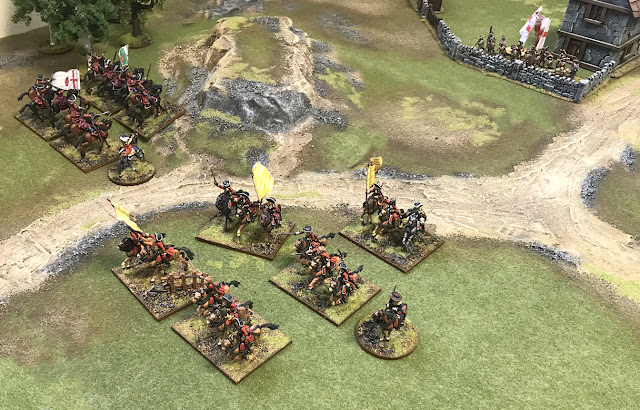 Turns three and four saw little action as Tyrconnel's reformed and O'Neil decided to take his men to the creast of the hill for a peek, just in time for the arrival of Hamilton...

'Here now, what are you lot doing lagging about, Sheldon? Why is O'Neil advancing alone on the enemy?' 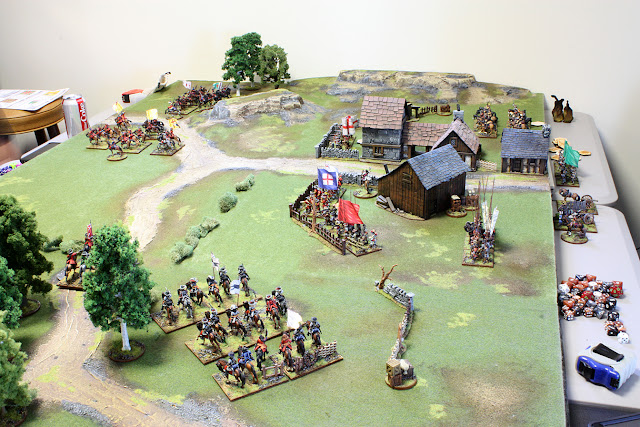 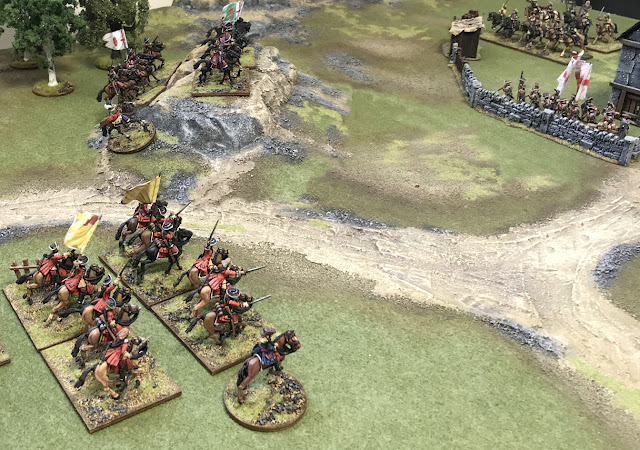 Volunteer Horse, farmers poorly equipped with kit from the last war, arrive to bolster the Protestat right flank, though doubtless a poor comfort to the troops already in position. 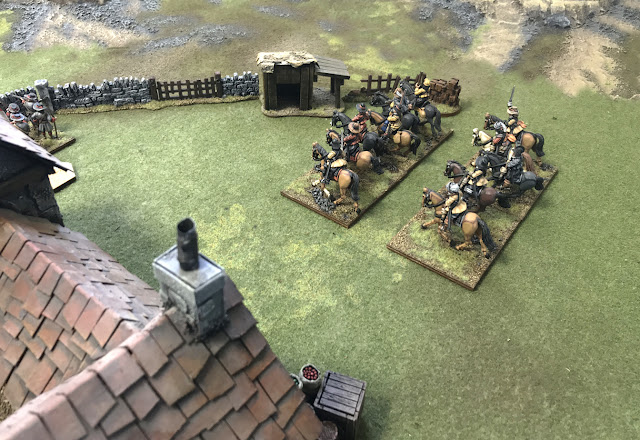 Lord Mount arrives with the reinforcements to take command. I let Thomas roll for Command Ability again, with the intention of allowing him to shift control to Lord Mount if the result was better - it wasn't... another Plodder, possibly drunk as well if the rumors were true. Thomas said Rawdon had no intention of relinquishing control, even if the newly arrived leader proved better...

'Well done, Sir Arthur, I'll take it from here...'
'Sod off - I'm the Cock of the North! You can go lead those nags you brought with you!' 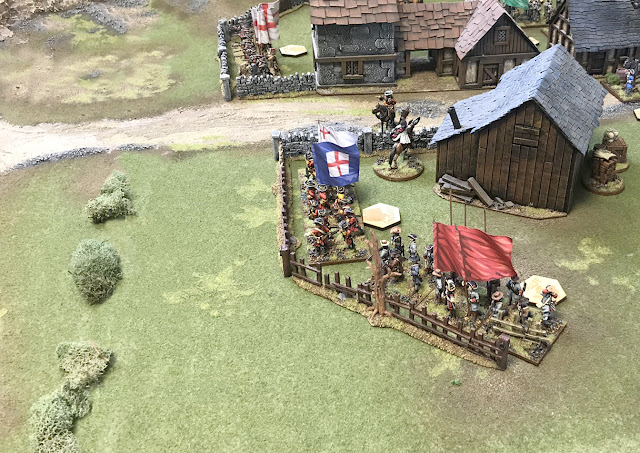 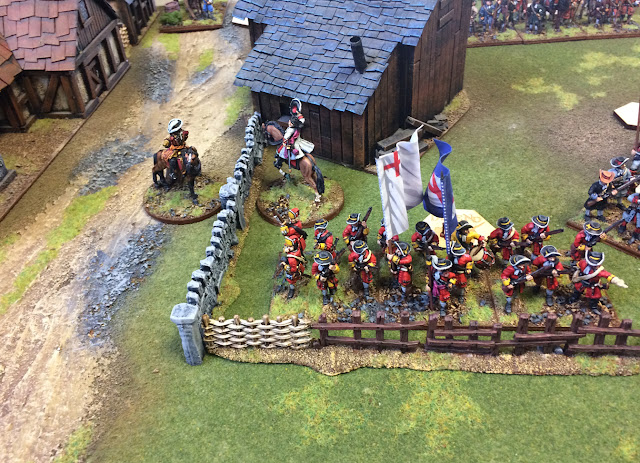 Already composing a stern letter of protest in his head, Lord Mount deploys on the right flank... 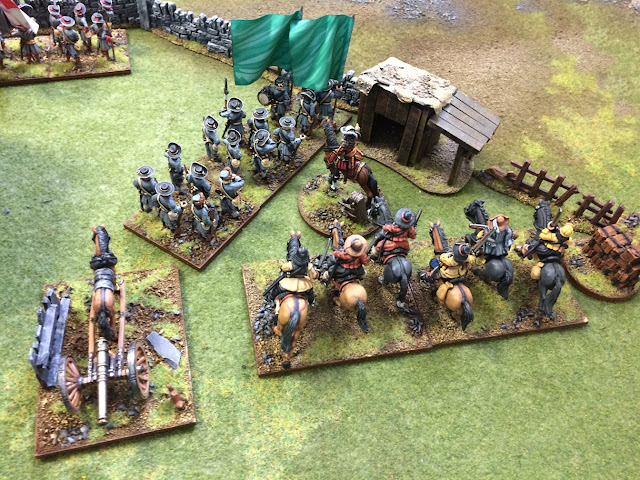 Reinforcements arrive for the Jacobites as well... 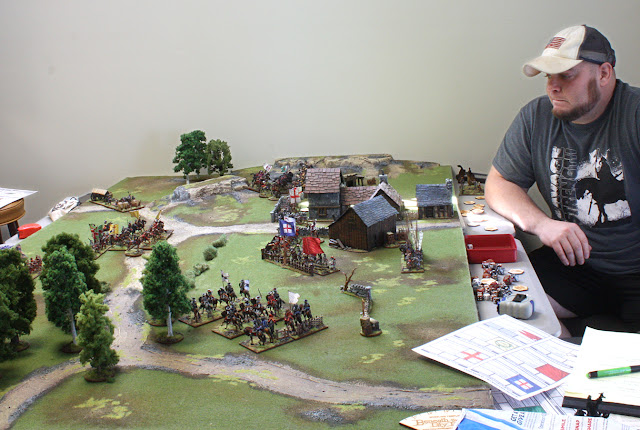