The Controversy of Defeat - The Collapse of the Jacobite Left Wing at the Battle of Aughrim, July 12th, 1691 - Part Three

by Clarence Harrison October 14, 2013
Michael McNally - Over the intervening centuries commentators have spilt an effusion of ink in discussing both St. Ruth’s conduct during the siege of Athlone and setting forth a number of theories that would presuppose that his subsequent desire to fight a pitched battle was based upon a fit of pique rather than any strategic consideration. 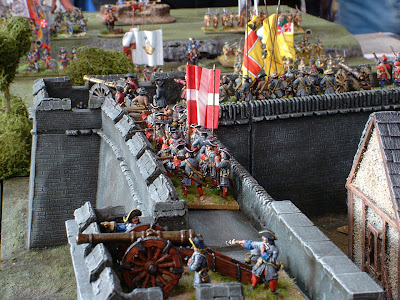 We would like to thank Michael McNally for contributing to the League of Augsburg blog as a guest author. Most of our readers will recognize Mike as the author of Osprey's The Battle of the Boyne 1690: The Irish Campaign for the English Crown and The Battle of Aughrim 1691. Mike has other Osprey titles in other periods as well, but will have another title in the League of Augsburg period next year in October 2014... Ramilies 1706: Marlborough's Tactical Masterpiece from Osprey Publishing. All text in The Controversy of Defeat series is Copyright 2013 Michael McNally and used with kind permission.
Share Share on Facebook Tweet Tweet on Twitter Pin it Pin on Pinterest
Back to The League of Augsburg