The Duke of Wurttemberg - Part Two 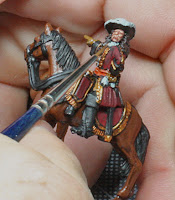 Clarence Harrison - After the base coats and washes, it's time to start building up the highlights. In general, I use a layer technique where the goal is to paint on successively lighter shades while making sure the colors below still show in the recesses and shadows.

The main colors I used for this stage are Cadian Fleshtone for the face, Wazdakka Red for the coat and saddle cloth, Gehenna's Gold for the trim, and Skrag Brown for the horse. The sash was highlighted with Wargames Foundry Orange 3B. These middle tones will actually be the main color an observer will see because I cover all but the deepest shaded areas and my next highlight stage will be very small.

Many areas will get one more layer, but I normally only do one on black. In this case I have used sharp highlights of Dark Reaper for the cuffs on the coat and the boots and Eshin Grey for the hat, harness, scabbard, and horse. I'm not sure the difference shows in the photos, but Dark Reaper is a blue black that appears richer while Eshin Grey is more neutral. 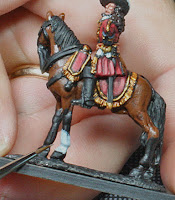 I do very little blending on my wargame models, but large areas of flat color look better with variations. In this case I am speaking of areas of the horse. I used the Skrag Brown mixed with water to paint on a layer of highlights, again making sure the first layer of color shows around the harness and saddle and in the recesses between the muscles of the horse. Then I go in with a second pass with the same color with the effect of building more opacity which creates a softer transition between shades. Again, I'm not sure this has come out in the photos as well as I'd like, but you get the idea.

It is also at this stage that I add in any markings I want for the horse. It is helpful to look at references of horses to get an idea of how these should look. There are near limitless variations and moving beyond solid colors or the basic stockings can be rewarding, especially if you are painting regiments. 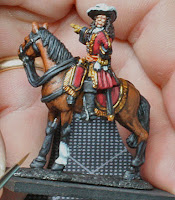 The photo on the right shows the model at the end of the second stage. You can see the various areas stand out from each other even in the thumbnail image. This would even been enough to stop for wargame models and on rank and file I often only paint up to the third stage on flesh tones and coats, but character models always deserve a little more effort! In the next post I will add the final highlights and a few extra details.
Share Share on Facebook Tweet Tweet on Twitter Pin it Pin on Pinterest
Back to The League of Augsburg