The English garrison of Tangier. Andrew Abram Helion Century of the Soldier No83 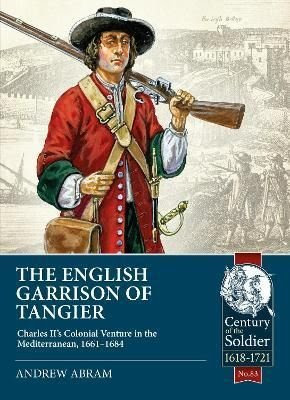 English colonial activities in North Africa have long fascinated me, to the extent that the first game I created on the show circuit to simulate it made the cover of Wargames Illustrated over 20 years ago. It is such a fascinating story but largely forgotten in this country and piecing together fragments of the adventure has been a pastime over the years.

The arrival of this title from Helion brings a huge pool of information together in one place. Helion books appear to have been getting thicker by the month and this volume weighs in at an enormous 381 pages. As an aside, I think the size of the new wave of books has reached and perhaps gone beyond the limit of what is feasible in soft back as the weight of paper is beginning to distort the shape of the books even when lying flat. I understand that hard back really increases production costs and these titles, fantastic as they are to the initiated are unlikely to appeal to the mass market so a compromise is inevitable, that being here, a soft jacket. When reviewing a product I think it is important not simply to eulogize even when the item is outstanding otherwise the credibility of the review and by implication, the reviewer, is diminished.

Back to to the book... The section or chapter titles are a great navigiation aid particularly for homing in on aspects which a reader may want to reference quickly such as The Restoration Army, The Tangier Garrison, The arrival of the English, Know your Enemy - The Army of Khadir Ghailan and the Moroccan Army, Hardship, Resilience and Close-Quarter Action 1675-78 as a few examples.

The breadth and depth of information in the book is I think unsurpassed. I cannot recall another work on Tangier which provides anywhere near this level of granular detail. Abram provides an enormous quantity of transcribed original documents regarding regimental muster rolls, officer lists, inventories of arms and equipment and contemporary documents including journal extracts and commentaries from serving officers and politicians.

Information much sought but difficult to locate has now been brought together and this will provide sustenance for wargamers and historians alike. The works of Wenceslaus Hollar provides an extremely vivid perspective on the appearance of the garrison, the town, fortifications, the harbour and mole and the terrain. The descriptions of troops in action provide a strong flavour of military life in the garrison and the challenges facing this first serious English military enclave in Africa.

Modern photos provide a nice calibration against some of the Hollar plates and engravings. The book is actually vast and it is clear that Helion have consciously rowed vigorously away from the snapshot style books offered by Osprey. It is common to hear buyers say, I only bought the Osprey title for the plates. The standard offer from Helion is now scholarly, serious, detailed and an established reference work. That brand differenation process is complete.

I thoroughly commend this book for all of the previously stated reasons but if I could wave a magic wand over it and the other recent titles purchased I would wish for a contents page, an index, some more of Patrick Courcelle's warm and gentle artwork beyond the cover tease, and a little colour inside. Not everything Osprey did was bad!