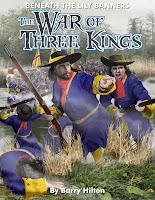 It's been quiet around here, but I've not been idle - just haven't had the time to do any proper posts. My games are officially scheduled for the Guns of August show at the Virginia War Museum in Newport News, VA. On Saturday (August 25th) I'll be running games of Beneath the Lily Banners at 10am and 2pm and again on Sunday (August 26th) at 10am. My table is in the main hall, across from the M-5 tank! I'll also have copies of the new BLB book, The War of Three Kings, as well as Donnybrook and Republic to Empire for sale at the table.

Speaking of the table, remember how I said I already had the boards I needed to run the scenario I've chosen - Crossing the Shannon? Well, somehow I decided they wouldn't work, so I'm building a brand new 4x8' table... 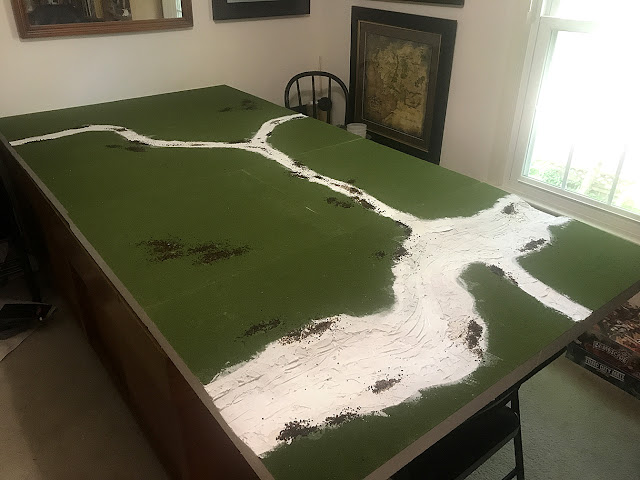 I'm trying something new, using 2-inch thick foam tiles, rather than my usual wooden boards. These are what Barry has used for the League of Augsburg games for decades (wow, he's old). I'm using a mix of 2x2' and 2x4' sections. They won't be as tough as my old method, but my brother suggested painting the sides with a few coats of white glue before painting them which will give much more durability. They also won't be anywhere near as heavy as my old boards as I can easily carry the whole stack in one trip.

Barry's boards are painted and flocked, but I used my normal method of a felt-backed grass mat for the main layer. I just glued the mat to the foam and trimmed the edges flush when it was dry.

This is a very fast way to make a table. I glued all of the felt in one evening. The river and roads were carved in another and covered in joint compound. The rough texture (my usual coffee grounds) was added this morning and the glue will be dry to allow the first coat of earth paint to cover all of the white areas this evening. Not bad for three days work. This week I'll finish the painting, including the river and add additional static grass and other ground cover. The last step will be adding resin into the river bed, probably next weekend.

I love building terrain and I think I really like this combination of materials. There has been zero warping of the foam so far. I'll reserve final judgement until after I see how these stand up to a weekend of gaming.