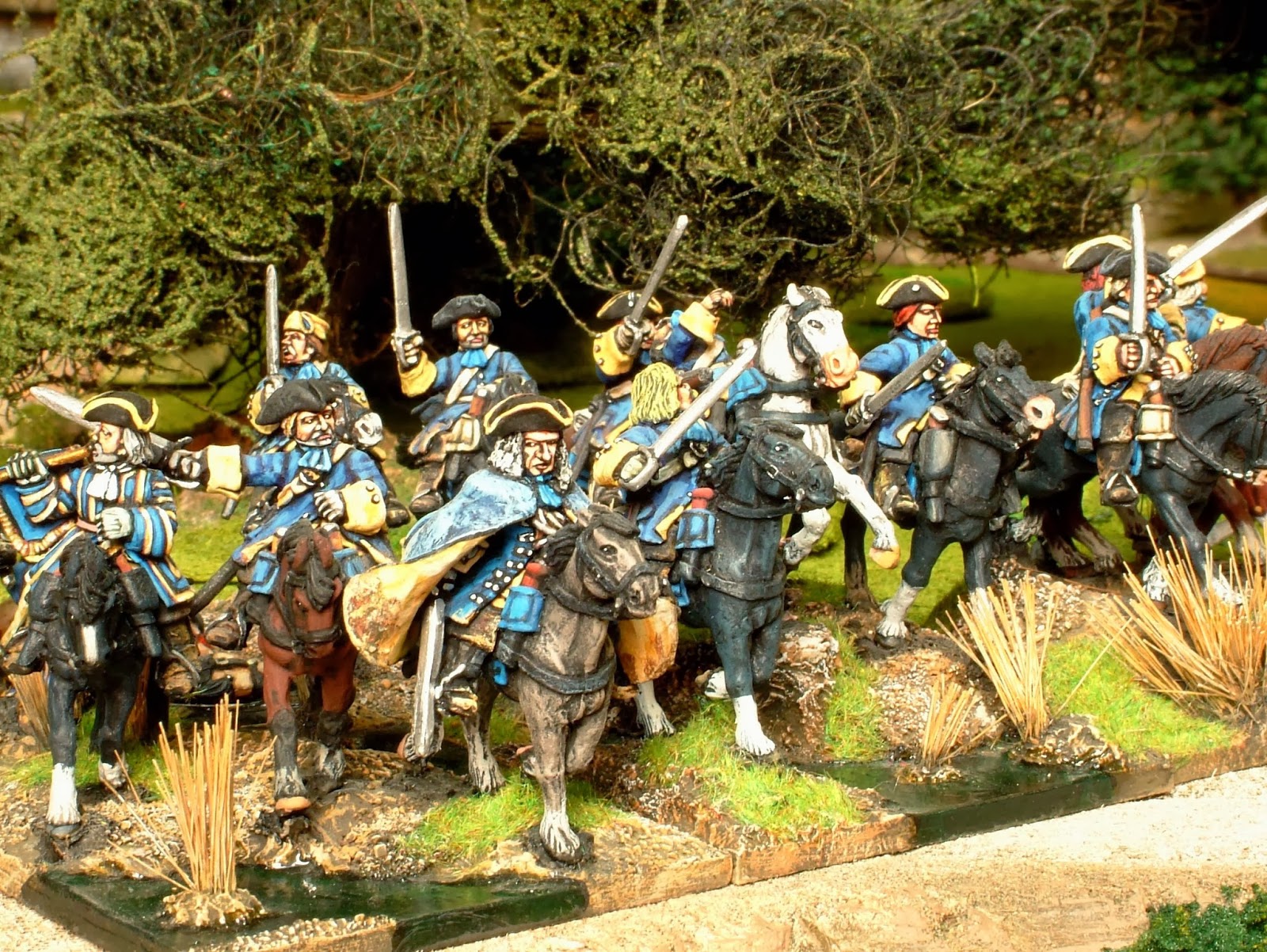 Andreas describes the historical action in part 2...
The Battle of Helsingborg
Early on the morning of February 28 the Swedish army started to move west towards the sea for a few kilometers and then turned south. The army formed into five columns ready to attack the Danish army. Rantzau was also up early that morning and formed his army facing northeast, the most likely facing of the Swedish attack. The terrain in front of the Swedish army was not the best; it was full of frozen swamps, deep ditches and low stonewalls. A thick fog concealed the armies from each other and it came as a surprise for both Stenbock and Rantzau when the Swedish army around 10 o’clock in the morning appeared to the left of the Danish army. The Swedish right flank of cavalry stretched far beyond the Danish positions formed on the slopes of the Ringstorp Heights. Rantzau immediately ordered his army to turn towards the position of the Swedish army. He positioned his artillery, 12 pieces of different calibers, on the Ringstorp heights along with 29 squadrons of cavalry. In the Danish center, formed around the small village of Berga, was the Danish infantry. Sixteen battalions of infantry formed in two lines behind a line of cheval-de-frise to protect them from cavalry attacks. On the right flank 29 squadrons and 2 battalions were still trying to get into position. With them was also Rantzau, doing his best to bring order to the chaos that had erupted.

Stenbock was also surprised by the Danish formation and as his battalions and squadrons started to form a battle line, they started to slightly turn left to better meet the Danish army.  The Swedish army had 60 squadrons equally distributed on each flank of the 22 battalions strong center. Stenbock also had 34 cannons, although of lighter calibers than the Danes. The two armies were roughly the same size with about 14 000 man fighting on each side. The Swedish turn to the left was perceived as an attempt to out-flank the Danish right flank. Rantzau decided to counter this by ordering his whole right flank to advance. This on the other hand was perceived as an advance by the regiments in the center, which slowly started to advance, causing a wide gap between the center and the right flank of the Danish army. 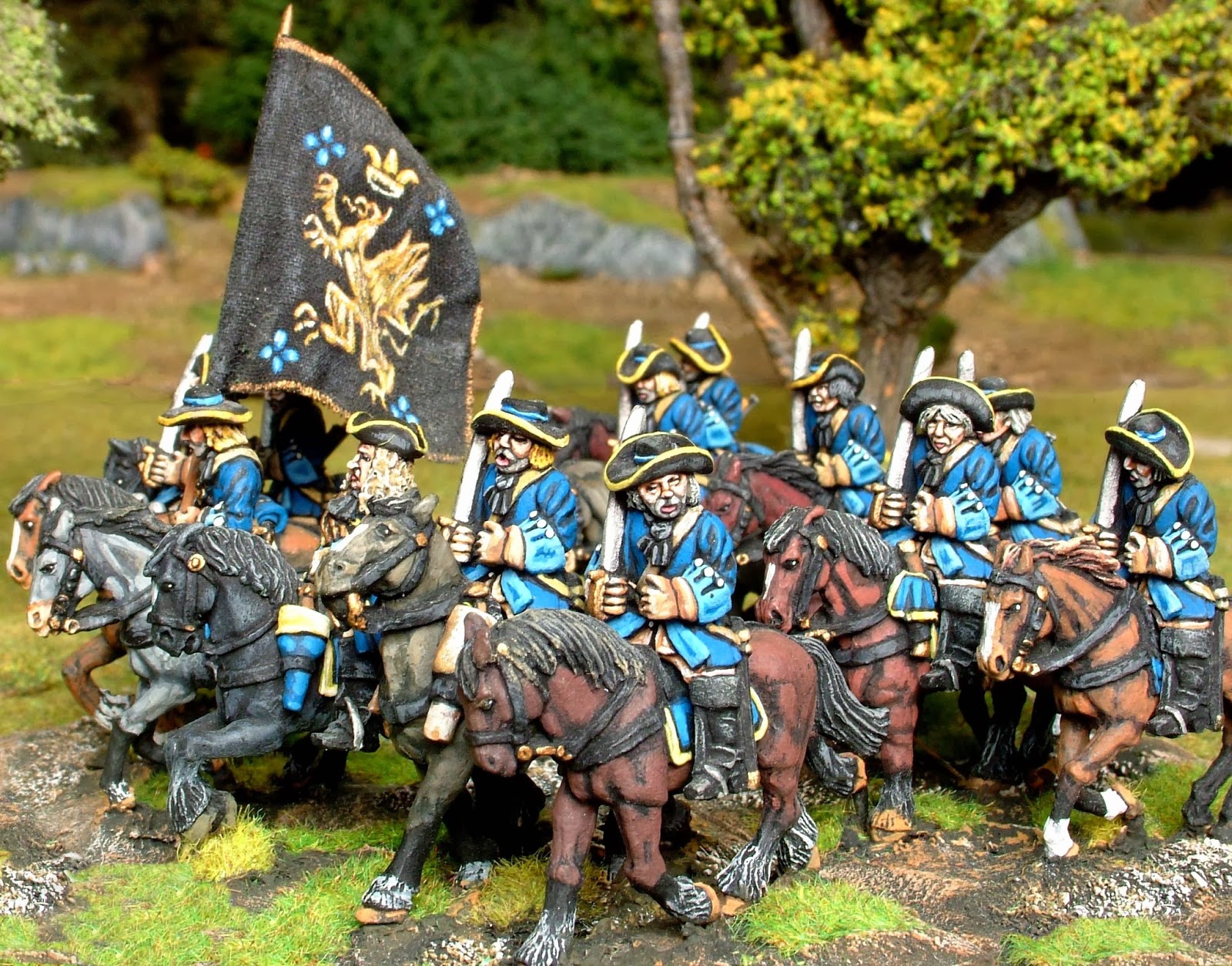 The first contact was made far on the right of the Danish battle line as the cavalry of the Danish right flank surprised the cavalry of the Swedish left flank. A fierce battle took place around the village of Brohusen were numerical inferior Swedish squadrons were beaten back by guard cavalry regiments of the Danish army.  Reinforcements from the second Swedish line were soon ordered in to the fight and they soon started to win ground. Stenbock withdrew a few of the cavalry regiments from his right flank to support the attack on the other flank. Rantzau himself carelessly threw himself into the fighting and was soon wounded with a shot through his lung. Unable to command he was escorted back to Helsingborg and later in the day evacuated to Denmark. Without their commander and facing growing numbers of Swedish cavalry squadrons the Danish right flank soon collapsed. The remaining soldiers fled towards Helsingborg and some of the Swedish cavalry chased them all the way to the city walls.

In the meantime the Swedish infantry in the centre had traversed the difficult ground in front of the Danish line and with their battle cry “With the help of God and Jesus!” they attacked the Danish positions. The Danish battalions fired a constant fire but the shock of the Swedish pikes and bayonets were too much for the leaderless Danish army. The fight was bloody and many fell on both sides. Eventually the Danish line broke and the battalions started to retreat towards Helsingborg. The only regiments that stood their ground were the Danish Foot Guards and the Grenadier Corps. Their positions on both flanks of the centerline occupied the Swedish battalions long enough to let several of the Danish battalions reach the safety of Helsingborg. Of the three battalions that attacked the foot guard battalion they all reported around a third killed or wounded after the battle bearing witness to the ferocity of the fighting.

At the same time as the Foot Guards fought on the right flank the attack on the left flank was well underway. The Danish left flank was severely weakened as two cavalry regiments had been ordered to reinforce the right flank but had been caught up in the panic and also fled to Helsingborg. Although this was also the case with the Swedish right flank facing them the Swedes were still numerically superior to their Danish foes. The Swedish squadrons had been harassed by cannon fire from the Danish batteries on the Ringstorp Height and suffered several casualties but had stood their ground. The Swedish attack started once a gap between the Danish right flank and the center arose. The Swedish squadrons rode around the Ringstorp height to attack the remaining Danish forces in the rear. They were met by some Danish squadrons who quickly broke and fled towards Helsingborg. Instead of pressing home the attack the Swedish squadrons pursued the Danes towards Helsingborg. This meant that the remaining Danish Grenadier corps could continue the fight. The corps was attacked by two Swedish regiments but stood their ground for some time before they retreated back to Helsingborg in good order. Casualties were high on both sides. 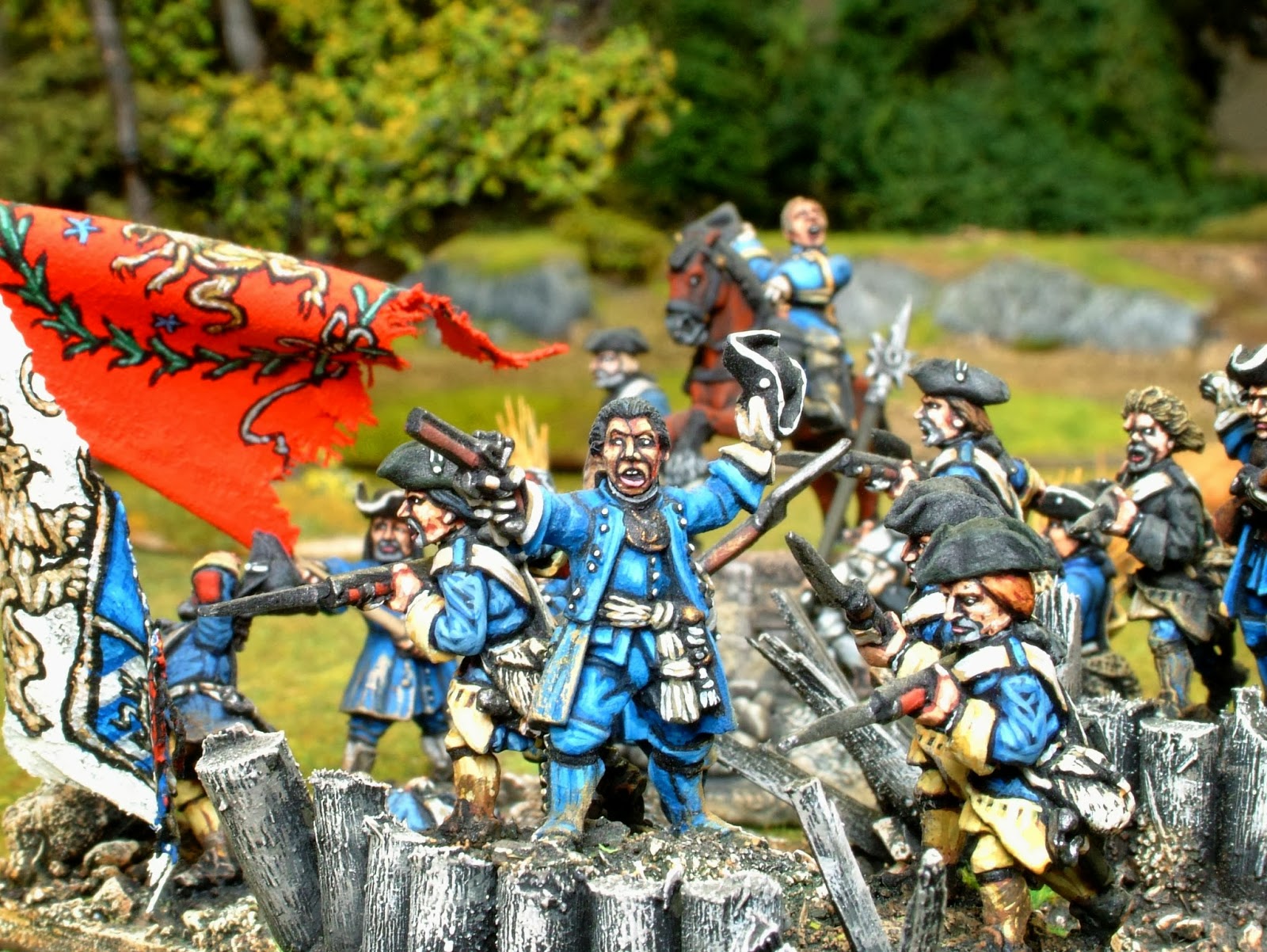 Aftermath
The battle was over around 3 o’clock in the afternoon and the battle had lasted for no more than an hour and a half. Smaller skirmishes were still being fought during the afternoon as isolated Danish troops were trying to get back to Helsingborg. The Danish army had lost the battle and more than 5 000 men were dead or wounded and some 2 500 had been captured. The Swedish army counted around 900 dead and some 2000 wounded but had won the battle. The Swedish army was too weak to besiege Helsingborg and instead made camp outside of the city and waited. Stenbock sent a request for capitulation but this was refused and the new Danish commander, Frantz Joachim von Dewitz, invited the Swedes to storm the city. The two armies watched each other for a few days until the Danish king, Fredrik IV, decided to evacuate the city. The evacuation started on March 4 and was finished late in the evening the day after. When the Swedes entered the city a horrific sight met them. The Danes hadn’t been able to evacuate their horses or all of their supplies and obviously didn’t want this to fall into Swedish hands. The solution had been to kill all the horses, some 6 000, and put the cadavers in wells and cellars or in the streets. The 10 000 barrels of supplies, mostly grain, had been poured on the streets together with black powder, to make it absolutely useless. The Swedish soldiers refused to clean up the city and eventually nearby farmers and fishermen were threatened with violence if they didn’t clean it up. By this time it was already too late as the dead bodies had poisoned the city’s water.

For Stenbock, and Sweden, the battle of Helsingborg was a great victory. But in the big picture the result was nothing more than a little breathing space on the way to inevitable defeat. Stenbock’s army was later put to use in a campaign in northern Germany from 1712 to 1713. Here Stenbock led the Swedish forces in the battle of Gadebusch, another Swedish victory. But the Swedish forces were outnumbered and retreated to southern Denmark and the fortress of Tönningen, which belonged to Sweden’s ally, Holstein. Allied forces soon besieged the fortress and Stenbock had to capitulate in May 1713. Stenbock ended up in Danish captivity where he died 1717. But the war continued to 1721, eleven years after the battle of Helsingborg. Sweden was utterly defeated and had lost its position as a great power in Europe.
Share Share on Facebook Tweet Tweet on Twitter Pin it Pin on Pinterest
Back to The League of Augsburg