by Clarence Harrison March 01, 2017
Clarence Harrison - The Warfare Miniatures USA store opened today, I've finally had a bit of time with all my preparations for this to get in a little time on brushwork for my own collection with the first troop of King James II's Lifeguard. 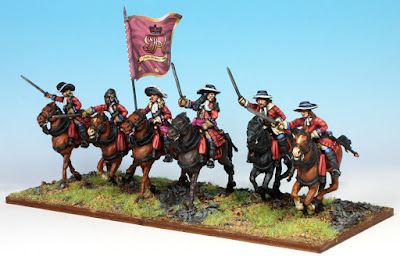 The Lifeguard troops were as large as squadrons (not sure why they didn't just call them squadrons). As usual with the Jacobites, we only have sketchy info on uniforms. These are based on the uniforms of the Lifeguard when King James II was the undisputed ruler of England. I was going to paint white lace on the cuffs, but on most of the models the gauntlets nearly cover these and the result was that the cuffs looked white! The models were drawn from multiple Warfare codes with a mix of Enthusiastic Horse and Cuirassiers.

I'll have the second troop by next weekend with a white flag and white trim on their saddle blankets to distinguish them. I am determined to actually finish my 1690 project this year (no, really). I still need to paint 4 battalions of foot, 4 squadrons of horse, and 4 squadrons of mounted dragoons to finish the initial goal for my Jacobite army. I need two battalions of Huguenot foot for my Williamites too. I can easily complete one unit per week when I want to so there's no reason I can't get these finished by the end of summer even with interruptions and wandering off through other periods...