The Walls of Limerick, Part I

by Clarence Harrison April 12, 2018
Clarence Harrison - Every so often I get the urge to launch some sort of stupid large project. Ever since my partner's series on the Walls of Derry, I've wanted to do something similar. My trip to Derry last year reinforced the desire. Finally, I'm planning to run some games at a small local show if my schedule works out - The Guns of August in Newport News, Virginia. Rather than just set up something from my existing collection, I decided to build a new table and go all out.

Sorting through the mound of books I've collected on the campaign of Ireland, my first inclination was to do something around Derry again. However, then I stumbled on the first siege of Limerick. Gamers often ignore sieges thinking them to be dull., static affairs of battering walls with cannons, but both Derry and Limerick feature several small actions in the form of sallies that make perfect tabletop games.

On August 20, 1690, the besieging Williamite army launched an assault from their siege trenches to capture Yellow Fort, a small, open-backed redoubt outside St John's Gate. It took several attempts, but they were successful. The Jacobites responded in force with a sally by four battalions of foot and three squadrons of horse, countered in turn by more infantry and cavalry from the Williamites, including one of my favorite unit - the Danish Foot Guard.

To bridge the gap between the small forces involved in the initial assault and the battalions that later took the field, I've also decided to reduce the man to model ratio which will give me foot battalions of five to seven stands rather than the standard three. This will allow me to represent the detachments with a significant number of models rather than the 4-5 each would muster at the default scale.

I'll go into more detail about the scenario and forces involved in a later post, but for now I just want to introduce the project. 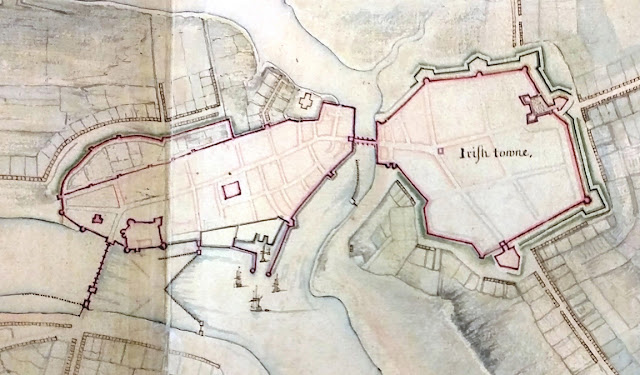 The walls of Limerick were between 25 and 30 feet high with a narrow walkway on the top. A ditch was excavated outside the stone wall and the spoil used to build a counterscarp, covered way, and glacis. The tiny section of wall I'm building is St John's Gate, seen above on the left end of Irish Town. The old citadel near St John's Gate was pulled down and replaced with a new bastion and an earthen demilune constructed outside. My first step for any project like this is sketches which I then take to the computer to make a scale diagram. This was extremely important for this project because there are very few right angles and it was going to be a pain to make sure everything lines up properly. 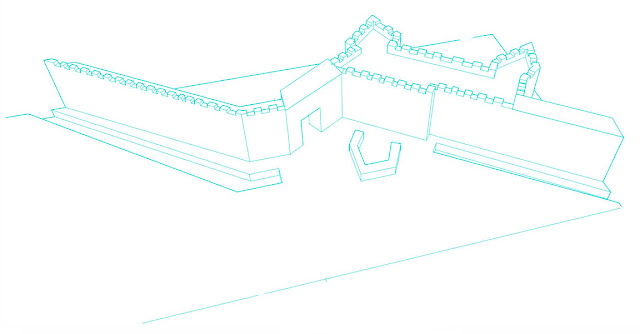 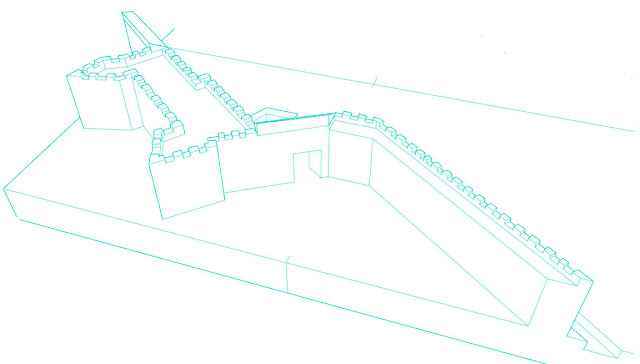 I spent a lot of time messing around with scales and angles to decide exactly how to lay this out. There were a few things to take into account...

1. I wanted to avoid a 'square' table. By this I mean 95% of games you usually see... side A is lined up on this table edge and Side B is on the other. The historical design actually helps this as the wall runs away from the gate at an angle. The battalions will actually end up facing down each other diagonally across the board.

2. I wanted the fortress to be permanently attached to the boards, but I wanted to keep things flexible so I can use these for other scenarios. What I decided was to use 2x2' boards. The bastion would be attached to one and the wall to the other, with the gate section remaining loose and 'bridging' the boards. This will allow me to replace that piece with a breach to play another style of game. Not sure if that makes sense, but it will be illustrated as the project progresses.

3. I wanted the counterscarp (and the siege trenches - more on that later) modeled as a permanent part of the boards, but decided to build the demiline as a separate model so I can use it as a redoubt in other games. The Yellow Fort will also be a separate model.

4. I wanted to be able to expand this in the future, possibly boards BEHIND the wall for urban based scenarios.

5. So, yeah - I'm building a new 4x8' table, the walls of Limerick, probably a few city buildings, siege trenches, and oh, and I need to paint around 120 infantry to bring my units up to strength at this scale... by the end of August.