The War in Ireland - a trip through the archives Part 1

I have been writing about and gaming the War in Ireland for over thirty years and have accrued and published a considerable amount of collateral designed to provide gamers with the kind of info they need to get started. Despite this, I still have more stuff unpublished than published and aim to get the finger out in 2022 with some brand new and rebooted content.

Having just found some space to catch my breath at the end of 2021 I thought I'd take a couple of post to reflect on the wargaming journey through the much (and often deliberately) misunderstood conflict between 1688 and 1691. I am doing this to provide the start of a new paragraph in terms of output and take stock of what we have already available.

The political background is complex and although I find that to be one of the most fascinating aspects it can be a little confusing particularly if gamers just want to get the troops on the table for a game.

By summarizing what attracted me to it we get a list of where other gamers might possibly get hooked:

The conflict offers engagements from street brawls to pitched battles.

The mixture of troop nationalities and selection of regiments is extremely interesting and attractive.

The settings for the battles and skirmishes offer a wide variety of options on the table top.

The characters on both sides retain cache even today.

Collections are highly utilitarian and can be used in a wide variety of theatres beyond Ireland and the time frame 1688-1691.

Uniforms and flags are varied and attractive acting as a bridge between the early and late 17th centuries. 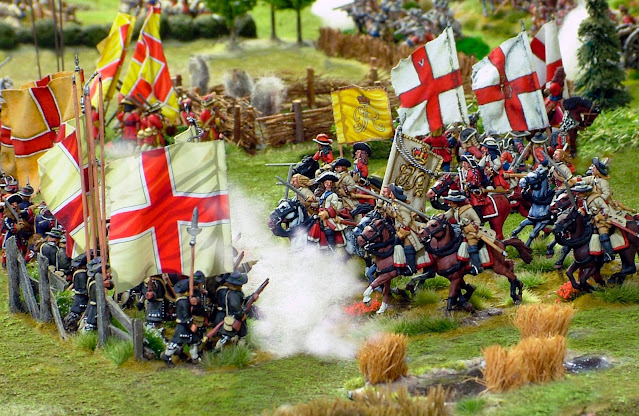 There is massive potential for campaign, role play, espionage, conflicted and conditional loyalty on both sides.

The connections to other theatres, powers and conflicts are legion.

This spontaneous list is enough to remind me of why I got sucked in as long ago as 1990. The fact that I live in a society in which the behavioural legacy of the age lingers on in attitudes and iconography acted as a further impetus to try and understand it all. I can't say I have totally bottomed out the reasons but I think my view is now informed and some aspects which I failed to understand as a young man are much clearer. It does take a lot of unpicking and more than anything an impartial attitude.

The long view also creates a better appreciation and I would go as far as to say empathy with the contemporary attitudes of both traditions born from the conflicts.

In part 2 I will summarize the available collateral