The files are tremendously detailed and to a level that would be impossible to sculpt with commercial viability in traditional materials. The scalability down to 1/1200 was exceptional and the detail remained crisp and workable. Where the challenges lie with 3D in my opinion are as follows:

1. Investment in a good quality printer - this is significant. £200>

2. The brittleness of the printed model particualrly if it has fine detail. Fine detail is vulnerable.

3. Speed of printing and potential failure rate. Very slow and quite high.

4. The mess. It is apparently messy and smelly.

This model came without any files for masts or sails. Having compared it size wise with Ark Royal Miniatures's own Sovereign of the Seas there was semi-parity and I could see a way of using metal masts and sails. Ark Royal Miniatures's Sovereign has an integral bow-sprit so another challenge was the scratchbuilding of a bowsprit and the attachment of sprit sail and sprit sail tops. This was tricky. I used a trimmed pin for the bowsprit and grafted on the sails with varying degrees of difficulty.

Painting the model was relatively straightforward although the increased level of fine detail reaches a vanishing point in 1/1200 where effort does no justify return. I took proportionately longer to paint the hull and decided early on not to just duplicate Sovereign of the Seas but paint the new ship as the compatible-sized Sophia Amalia(Amelia) of the Danish Navy. The ships although not identical, looked very similar and in 1/1200 scale this would be easier to achieve than in larger scales.

The finished model looks every inch a flag ship and the masts fit well although I had to drill out considerably larger holes in the hull to accommodate them. I also had to fit an ensign staff on the stern using a pin.

I would say the level of modelling required to achieve this result was medium to high and would not particularly recommend the process to anyone who does not enjoy lots of faffing around. I believe some of the other files in the range do have masts but I would be concerned about the robustness of 1/1200 files from 3D prints. I know the main counter argument will be - these are for 1/600 and I accept that, but even in that scale, thin section of resin will be extremely prone to snapping at the slighest snagging on a sleeve or accidental dunt with a tape measure. 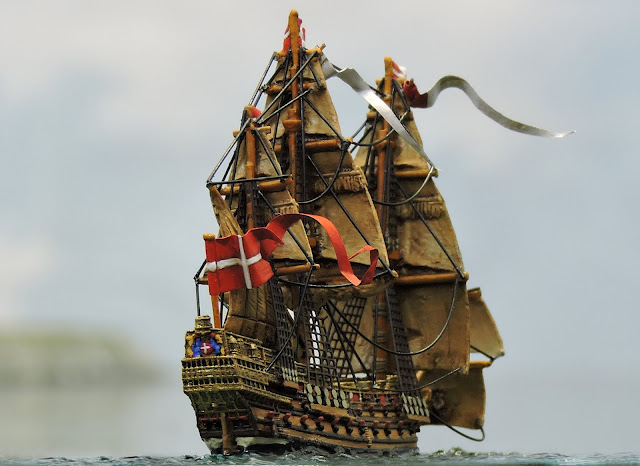 Would I do it again? Yes, I would like to have a go with other models. Will I buy a 3D printer, no.