Being based in Athlone allowed considerable time to explore this small but extremely important town, gateway to the west and last Jacobite bulwark on the Shannon. It was successfully held against an uncoordinated and half hearted attack in the summer of 1690. By 1691, it became the pressure point for the Williamite thrust across the great river and was stormed in June.

The breach was affected in the northern segment of the walls between the North and North East bastions. This site now lies within housing and sleepy streets but significant sections of the walls remain visible. Obviously, the clutter of 330 years of building work pollute the view but with a little study the size of the 17th century town and the relative positions of extant buildings become clear.

The town was modest in size and a sense of the realtively claustrophobic nature of the assault through the eastern (English town) defences is gained by walking from the site of the now vanished Dublin gate around the outside of the wall towards where the breach was affected in  near the north bastion.

Folklore has built up around the exact crossing site of the Williamite grenadiers. The helpful castle guides seem to have 'bought' somebody's story because the markers they cite for the ford crossing are too near the location of the now demolished bridge which crossed the Shannon right under the southern wall of Athlone Castle. The rive bank is also  now built up to a quay. The nature of the 17th century riverbank can be imagined by walking a couple of hundred yards south from the castle and looking at the natural low banks beyond the weir.

The castle exhibition is very good not just for the period 1689-1691 but for the wider history of Athlone. I thoroughly recommend a visit.

Some 4Play scenarios on Athlone coming soon too. 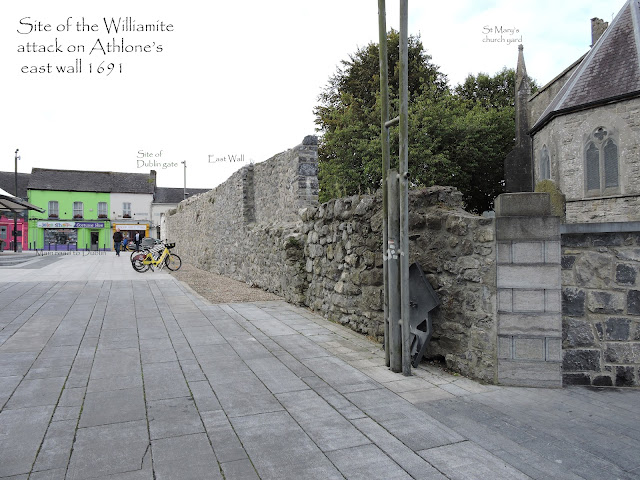