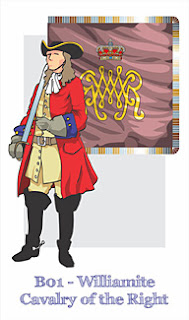 Clarence Harrison - One of the most common queries on the Fighting Talk Forum in relation to the periods covered by Beneath the Lily Banners centers on painting our little men. Wargamers are obsessed with details of a bygone age that most historians thought unimportant. What color coats did the Huguenots wear at the Battle of the Boyne? What kind of hats did Jacobite dragoons wear? Which Hamiltons were at Derry? What color socks did King James II's guard have? What... color... socks...

I've asked these questions myself in the few short years I've been involved in collecting armies for the period. Barry has been asking these questions for over twenty years. Often time the answer comes down to 'we just don't know'. Well, that is not very satisfying for the wargamer trying to collect the Danish Brigade in the Ireland campaign. So we go about collecting scraps of information from a dozen sources trying to piece together some idea. Here's where it gets fun - the sources don't always agree. Some books are out of date simply because of... well, the date they were compiled. A lot of work went into these and they used the best available information at the time, but new research provides revelations all the time. Sometimes we find things are wrong because the original observer identified the wrong unit at this or that battle. We find out the error later, again by new research, but if you only have the first book, you have no idea. Why the hell isn't there something out there that brings all of this stuff together?

The League of Augsburg and Quindia Studios are very proud to present The Wargamer's Guide to Uniforms of the Battle of the Boyne. This is a series composed of bite-sized PDF's, each focused on a collection of units in a different part of the battlefield. 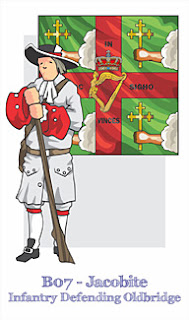 These are not blow by blow accounts of the battle - there are plenty of great sources out there for that. The PDF includes as much information as we could find - details on uniforms and flags, weapons and equipment, organization and command... When sources don't agree we tell you that. When we had to draw conclusions, we tell you that too, but we try to tell you why we made the decisions. Now, we haven't bothered with the shape of pockets or the number of buttons. These are meant for wargamers to use as a guide for painting their armies - though I'm willing to bet there's some cool stuff for history buffs too!

These are only the first series of many. The plan is to cover each theater comprehensively, starting with the war in Ireland - the Battle of Newtown, the Siege of Derry, the Ballyneety Raid, the Storming of Athlone, the Battle of Aughrim. Once we feel we've done justice to this we will move on to other areas.

Barry and I are extremely proud of these products and exciting about producing more. Undoubtedly, just as with old texts, new research will appear over the next months and years. Some of our educated guesswork will be disproven or on the odd occasion, be validated. That's ok. Use these to fuel your own research and let us know about it!

These PDFs are now available in the League of Augsburg shop!

Each PDF is 3-6 pages for ₤2, but allows the wargamer to just focus on the aspect of his collection he needs more information on. The entire series for the Battle of the Boyne comes in at exactly 50 pages and for ₤20, saving ₤4 if you order as a set! 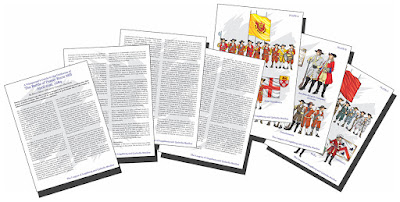 You can download a sample, D03 A Wargamer's Guide to the Uniforms of the Williamite Infantry of the First Wave at the Battle of the Boyne free!

Oh, and don't expect all of the units on the table at Historicon to match this guide as I painted many of them BEFORE we started the project. Wish I'd had something like this..

And by the way.. For the next calendar month to support the massed assembly of your forces for the Irish War, Warfare Miniatures will deliver POST FREE to anywhere in the world including the UK any order with over £45.00 of figures included in the order value.