Uniforms of the Foot Guard Regiments


Often in regimental museums little space is given to the early part of unit histories. Perhaps a plate or some sketches, occasionally a musket, hat or coat.


Not so the regiments of Scots and English Foot Guards!

In their museum plenty of space is dedicated to the first 50 years of their existence. Lots of original documents, facsimiles, plates, equipment, mannequins paintings and explanation are on display.


Effectively the three regiments of Foot Guards are the nucleus of the British Army and they have been involved in almost every campaign since 1660 in some form or another. 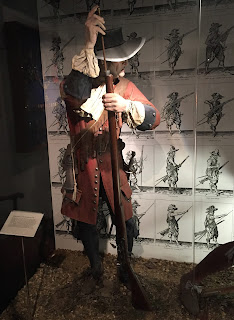 These pictures show some of the fine pieces on show in the museum.