I have been working hard on building 28mm ships for small scale actions. I was keen to try out these
large-small or, is that small-large? ships on the table and share my findings.

All of the 28mm stuff I have finished thus far is of 30 guns or less. I will also detail some actions using skirmish rules however, the naval aspect was really the focus of this first check.

The encounters were set in 1649. King Charles I has been executed. His son is now monarch. The Royalists exist in pockets across the Three Kingdoms. Prince Rupert commands the navy and Royalist privateers under  Sir John Grenville operate out of the Scilly Isles indiscriminately attacking ships of all nationalities simply to raise prize money to survive. Sir George Ayscue has been sent to clean out the nest of pirates. These little actions represent small ship activity around Cornwall and the Scilly Isles.

The direct link to my main period of interest is that most of the main protagonists both men and ships, went on to fight in the 1st-3rd Anglo Dutch Wars from 1652-1674 and many, right on into the Nine Years War and War of the Spanish Succession.

The ships I used fell into categories  1-3 (the smallest) from my new Mad for War Naval rules.

The Royalist ketch Fox was worth 66 points:

This  first game was pretty straightforward and a little disappointing because nothing really exciting happened. Fox  twice attempted to board Constance and failed. The Commonwealth ship fired several times and Fox struck on about turn 8, by then, somewhat worse for wear.

The second game was much more of a ding dong. I used two ships apiece. The same two as in the first game with their capabilities amended thus:

The Royalist ketch Fox was worth 79 points:

In addition, the Royalists received a shallop under sail, filled with Veteran privateers under Captain Nettles @ 24 points whilst the Commonwealth got a sloop the Verity:

This game began with the longboat attempting to board Verity and failing. She was caught between the fires of both Commonwealth ships and promptly sunk! The now outnumbered Fox found herself outmanouvred despite drawing first blood against Constance. The wind changed direction four times in twelve turns during this game catching both sides in irons on more than one occasion.

At a point where Fox had her nose in the wind, she was stern raked and caught fire. In some considerable trouble, she continued to take damage but with the help of the personalities aboard, passed her morale check to struggle on and watch the fortunes of her smug enemy, change dramatically. Her crew even put the fire out!

The wind moved from NNE to N and as Verity attempted to avoid being caught in irons, she collided bow to bow with Constance. The damage to the smaller sloop was terminal and her crew abandoned ship leaving her barely afloat in between the two larger ketches. Despite several failed attempts to board by the Royalists and some ineffectual gunfire from both sides, the battle ended with each badly damaged but still afloat. The game was judged a draw.

Some amendments and clarification created to deal with the small ship situation:

Apart from raking shots, each ship only fired using a single signature die therefore, the normal mechanic for assessing catastrophic hit damage could not be used. Each time a broadside was fired a d8 was thrown with the firing die. On a score of 8, a catastrophic hit was caused and the normal table consulted. This only happened once in the game when Constance stern raked Fox and she caught fire, 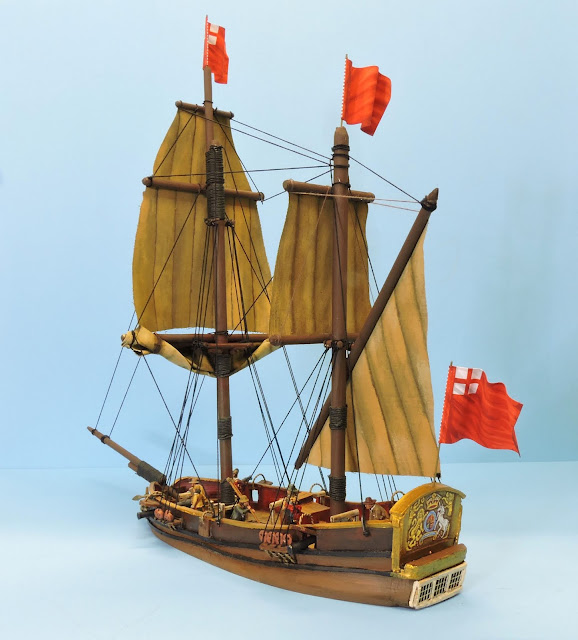