Scotland in May can be heaven. Anywhere after 16 months of looking out of your home office window is nice but managing to spent that first trip away in glorious weather walking historical sites in Argyll was just the tonic I needed. I had a very strong urge to visit once more, some of the sites I had written about in the 4Play packs  003 One Thousand Irish and 017 The Campbell's are coming! 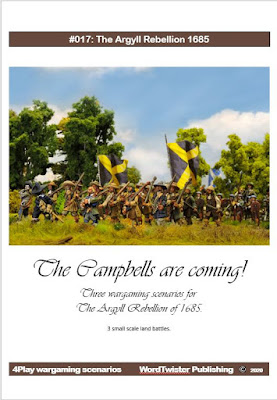 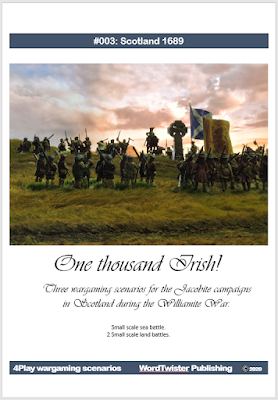 Being based out of Inverary made the trips I wanted to make very easy. First up was the site of the battle at the head of Loch Fyne which features as scenario # in The Campbell's are coming!  Here, a significant action involving Government (James II & VII) forces against Argyll's Whig rebels took place. Boats on Loch Fyne also feature in the action.
The photos show the battle area pretty much as it was in 1685.  What struck me, walking the ground again was the narrow nature of the land strip between the loch and the side of the steep hills. Several hundred men on each side were involved so this would have been a claustrophobic action.

The Helion book Fighting for Liberty by Stephen Carter has several maps of the evolving battle which are useful. Some of these perhaps exaggerate the area available for deployment as the photographs show, from lochside to high ground the available space is less than 150 metres at the widest point before the slope becomes impossible even for loose order troops.

The Kinglas river has perhaps fallen in depth since 1685 and although crossed by a Wade era, Telford-constructed bridge, would have been fordable even by infantry just above the point it joins Loch Fyne.

The second site was the ancient hillfort capital of the Kingdom of Dal Riata (Riada). Such an important heritage location going back to the time of the Picts, I chose this for the battle between the Irish reinforcements arriving from Ulster in 1689 and the Argyll clans and militia trying to stop them meeting up with Dundee.

This features in scenario # of One Thousand Irish. This area next to the A816 is, apart from a couple of farms, largely unchanged. The 4Play scenario has Jacobite Irish infantry and Highland volunteers clashing with the clansmen loyal to Argyll and thus Willem van Oranje.

The next site is Kilchurn Castle which sits at the head of Loch Awe - the longest freshwater mass in Scotland. The castle, a Campbell stronghold, was continually added to since its construction in the 15th century and acted as a Williamite garrison during the 1689 campaign and a Jacobite stronghold during the 1715 campaign. It is accessible by land now by used to sit on an island which became exposed after the loch's water level was altered in 1817.

What is striking about these sites is the remarkable terrain which would have made conventional warfare of the age very difficult.
I had a first hand encounter with a bog on my mission to photograph Kilchurn. I scrambled down a steep bank and began to make my way through a tussocky areas which I quickly realized was in fact a wet bog which only became apparent as one walked on to and sunk into it. I photographed it as is can be easily represented  on the tabletop.

On first glance it looks just like tussocky grass but is in fact like walking on a wet bath sponge. The depth of penetration from your legs can vary between ankle and lower shin depth. It was fed by an unobtrusive culvert about 200 yards distant from where I tried to cross. It may not have bothered a 17th century clan warrior but it got my shoes and trousers wet enough to be censured by The Boss!

4Play has an increasing canon of Scottish 17th century packs which I intend to supplement with some Covenanter Rebellion scenarios soon. 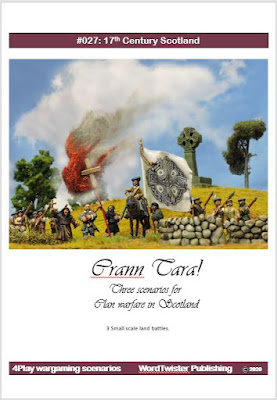