by augsburgeroberst January 18, 2020
The walk through of my evolving naval rules for the 1640-1700 period continues where we pick the action up at the beginning of Turn 4 with the Allies once more winning the initiative which allows them to move first or, compel the French to move.

By the firing step in T4 the Allies had manouevred ships into two opportunities. The first involves Eendraght, which despite the nice paint job, beautiful flags and historical heritage, is proving to be an unlucky ship in 1/2400 scale at least. Taking on water with her lower gun deck already flooded, moving at half speed and with limited manouevre capability, she decides to expend her first broadside at extreme range lest she be unable to contribute later in the battle. 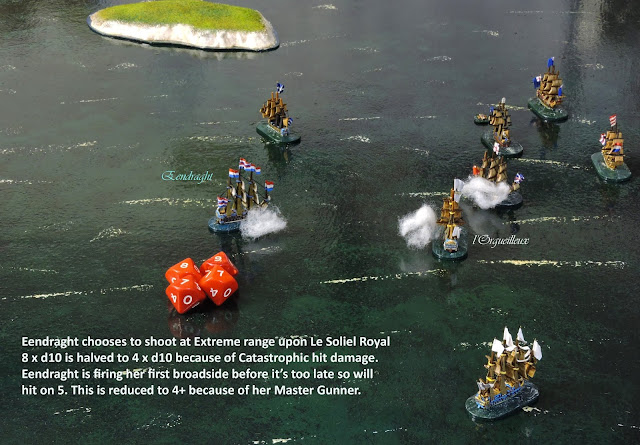 The target is the enemy flagship. Eendraght has several advantages - a Veteran crew providing d10s, a Master gunner lowering the to hit score to 5 from 6 and the first broadside lowering the to hit score by a further one, to 4. The biggest problem is that her 80 guns, equating to 8 dice are halved because the lower gun deck is flooded. Extreme range quarters the four available dice to one. The mighty flagship looses her first broadside with a solitary d10 looking for 4 to hit. She achieves this with ease but it is not even a scratch on the enormous Le Soliel Royal. 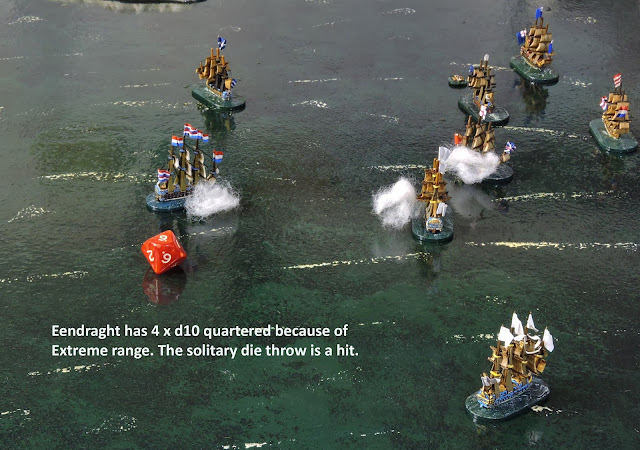 The next ship to fire is the Veteran 56 gun Mary. She has sailed across the bows of l'Orgueilleux at small arms range she adds a further 1 x d10 to her 6 x d10 for a bow rake and doubles the total to 14 x d10. Mary scores a disappointing five hits. This is a significant number but not enough to cause a Catastrophic damage check. 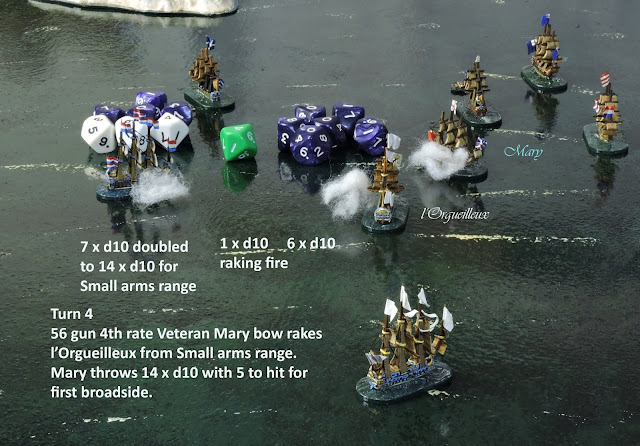 Three French ships have now taken damage and one of those, the 44 gun Aigle has been captured. The Allies appear to have the upper hand but worryingly, the flagship Eendraght is holed and struggling to stay in action. 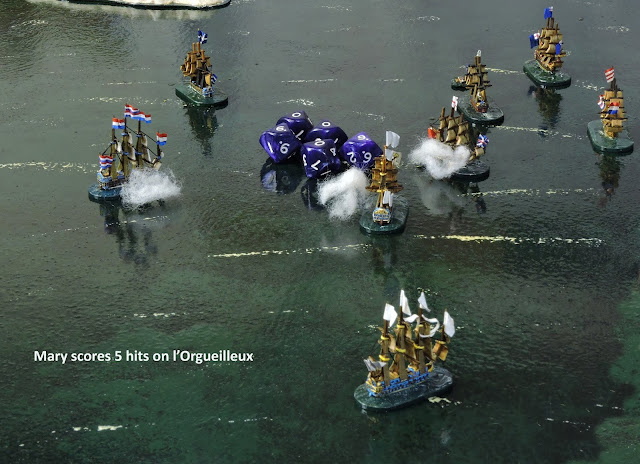 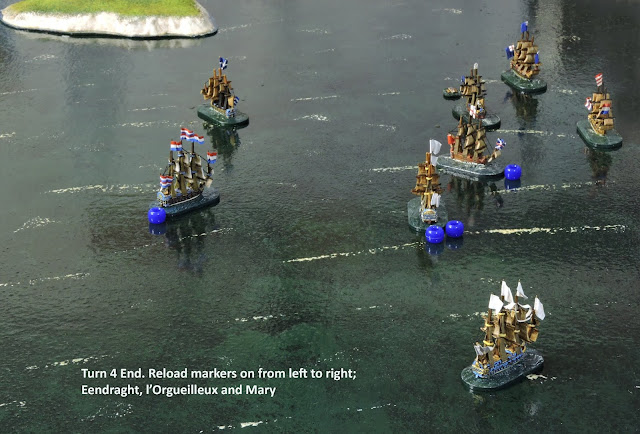 In the end of Turn picture above, note the double reload marker on the heavy- gunned 86 l'Orgueilleux. She will carry both markers fully through T5 with the first being removed automatically at the end of T5. At the reload check on T6 she will check to reload like all standard or light-gunned vessels. 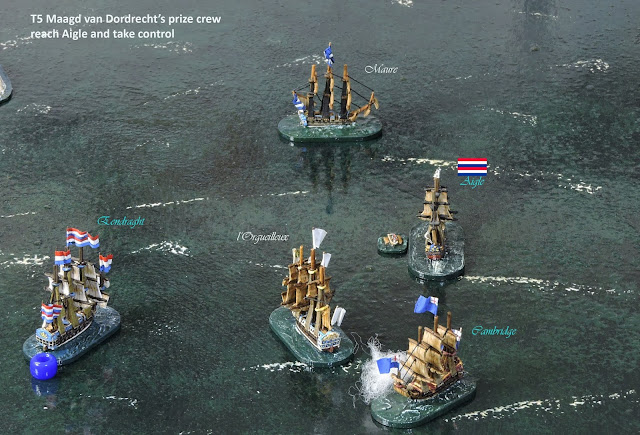 Once again in T5 the Allies won initiative. Only Allied ships were in a position to fire during the turn and the narrative deals with those opportunities further on. In the shot above, a vignette of 17th century naval warfare. Aigle has struck her colours and a prize crew longboat from Maagd van Dordrecht has just come alongside to take possession. In the foreground the fighting continues with the Cambridge (70) stern raking l'Orgueilleux.

The large and very slow French ships have not managed to alter course by more than 30 degrees during T5. The swifter enemy 3rd rates have sailed by broad reaching and gotten themselves between the two larger French ships at very close range. Cambridge fires on the 86 gun l'Orgueilleux and Maagd on the 100 gun Le Soliel Royal. With an identical manoeuvre in the opposite direction Maagd has already poured devastating fire into Aigle causing her to strike. This small arms range broadside is not quite a rake and does not lower the to hit score because she has fired before. Her Veteran crew of course managed to reload allowing this fire to take place. With 14 x d10 she manages an incredible 8 hits which is extremely punishing, however, it falls one short of the 9 hits required to force a Catastrophic damage check on a 1st rate. The French flagship reels but powers ahead.


By contrast the Drilled English 70 gun Cambridge is delivering her first broadside from barely 100 yards into the stern of l'Orgueilleux. She throws one extra dice for the rake and doubles the 8 x d8 to give a total of 16 x d8 hitting on 6s. Scoring a respectable 7 hits she also falls a single hit short of the 8 hits required to compel at Catastrophic damage check on the enemy 86 gun ship. Although powerless to respond this turn and badly battered, the French may just have made it through their potentially most vulnerable moment in the battle. 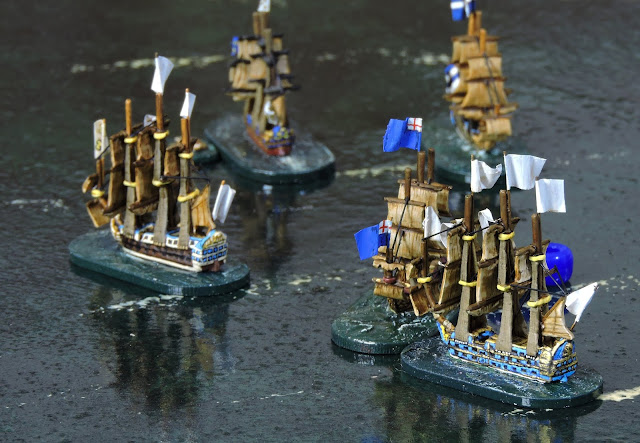 Refreshingly, the French were clear winners in the initiative stakes of T6 . Cambridge was in danger of colliding with the massive and yet unscathed Le Royal Soliel and was compelled to take a collision check for moving within one inch of the enemy ship. 5+ on a signature die throw was required to avoid even a glancing blow on the giant which she actually achieved! Cambridge swept across the bows of the slow moving Frenchman and passed undamaged, for now. 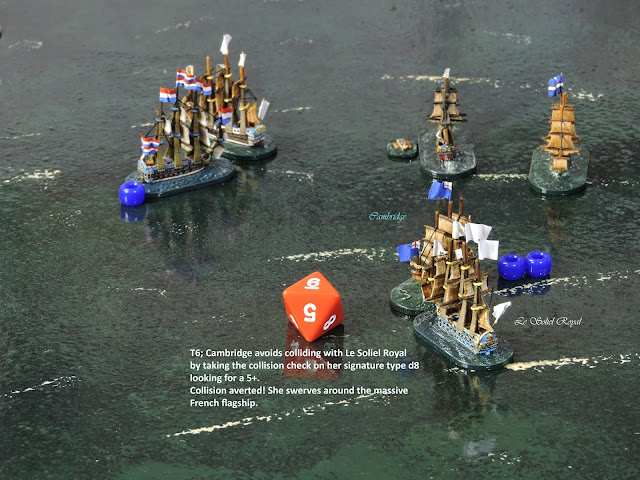 I have introduced what is effectively an opportunity fire rule called 'Fire as your guns bear!'. This can be invoked when a ship passes or is passed by a target which will obviously not be available at the end of all movement when the shooting step begins. A ship invoking the rule can freeze time and fire during it or, the enemy's move. Sounds gamey? well not really, the counterweight is that the shot is taken with all dice at -2 to hit so a 6 to hit becomes an 8 to hit. Clearly impossible for a Raw ship using d6 and very difficult for a Drilled ship using d8s. For a Veteran ship using d10, it becomes more of a proposition. The Mary is such a ship. A Veteran 56 gun 4th rate, gliding by the enemy flagship at less than 100 yards with her broadside loaded and ready to fire! That is just what she did!

This three picture sequence shows the story unfold. Incidentally, the real Mary was everything I have made her out to be. Originally a Commonwealth era ship The Speaker she was renamed and fought in more than thirteen major fleet actions bringing glory to the Republic, The Stuarts and the House of Orange. Hail Mary! 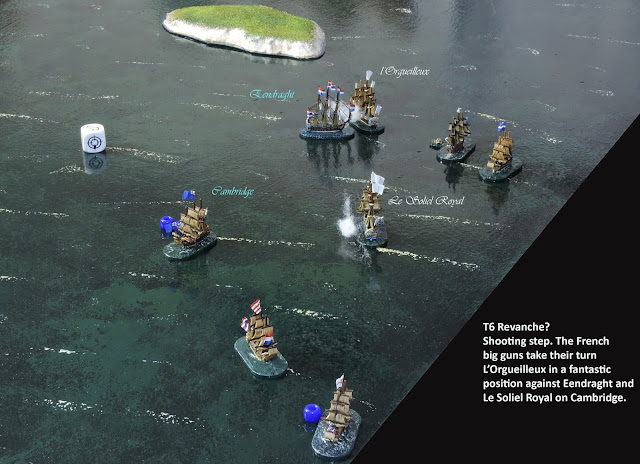 At the shooting step of T6 the tables have turned. Mary has sailed on, the rest of the Allied squadron is out of position and now the big beasts from France may gain revanche! 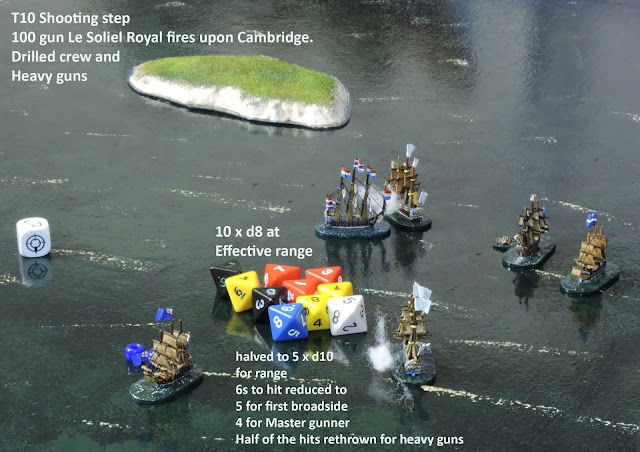 Le Soliel Royal (100) begins with 10 x d8 as her crew is Drilled. These ten dice are halved for range but her to hit score goes down to 4 because it is a first broadside and she has a Master Gunner aboard. In addition, half of the misses are re-thrown due to her carrying heavy guns. It is a respectable score on Cambridge but alas not enough to compel the Catastrophic damage check even on a 3rd rate. 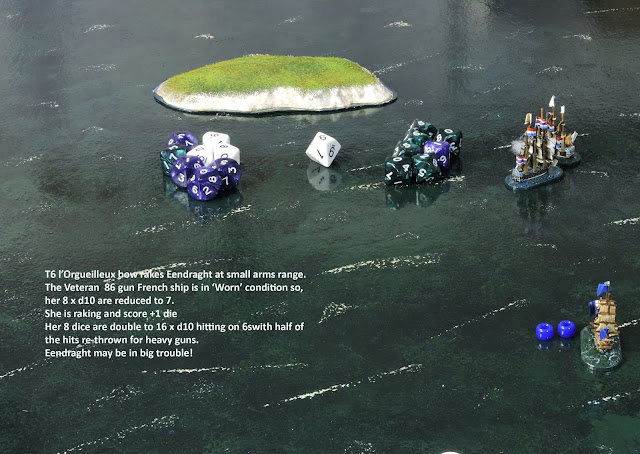 The next drama is somewhat different. The limping, sinking Eendraght was unable to avoid even a slow lumbering, heavy-gunned monster like l'Orgueilleux. The French ship at around 50 yards hove across Eendraght's bow and raked her with 16 x d10. L'Orgueilleux's firing capability has already been degraded but this position and range plus her heavy armament offer the money shot so far in the battle.


L'Orgueilleux smashes 11 hits into Eendraght causing a Catastrophic damage check and moving her damage into the fourth state of degradation - Critical. She must now take a compulsory morale check.

She is a Veteran ship thus uses a d10 signature die. She has a flag officer aboard which adds +2 to her score. Luckily the Cambridge is just within support range of six inches adding a further +1. On the debit side she takes -1 for the second Catastrophic hit received (remember she was holed before by the same ship). She is also in the Critical damage quadrant which carries another -2. This is a net zero +3/-3 meaning, her raw die throw will define her destiny. Eendraght threw 6! Bloody and battered she'll struggle on with 80% damage.

We'll revisit the battle again for the next turn and this is a great point to leave it... 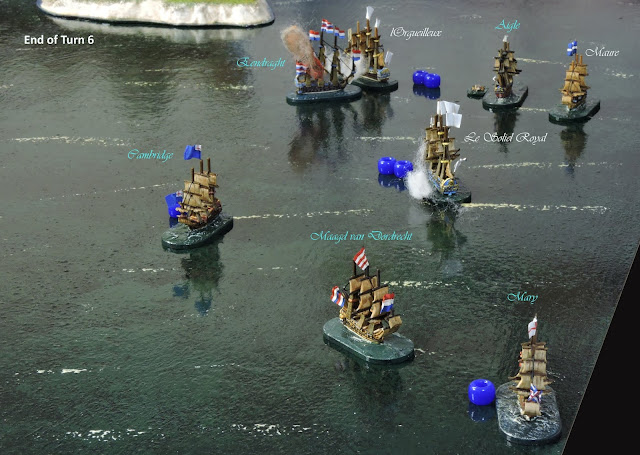