by Clarence Harrison April 26, 2017
Clarence Harrison - A little after noon, Barry, Bob, and I rolled into Londonderry proper. We passed through the walls at Ferryquay Gate and climbed a set of stone steps to the top of the wall in a drizzling rain. 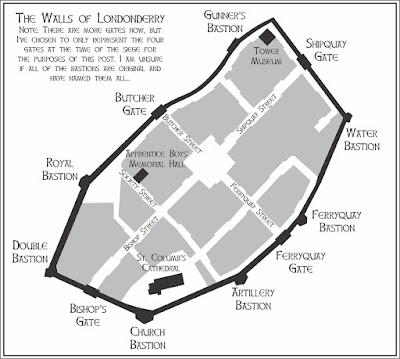 The walls of Londonderry were built in 1613-18 and the entire circuit remains intact today. Of course there have been repairs and the original gates were enlarged to allow for modern traffic to pass, but you can still walk the mile (1.5km) trail atop the battlements. For the most part, the inner town retains the original street layout as well, serving as a fantastic example of a renaissance town. 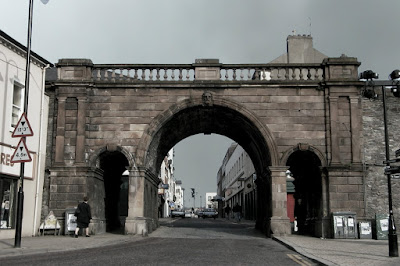 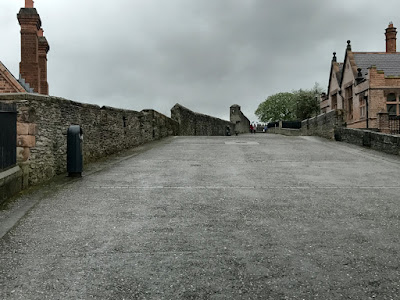 Something that struck us immediately as we traveled south away from Ferryquay Gate was how steep the slope of the wall was. How many times as model builders do we take the time to ensure all of our fortifications are level? I was also struck by the fact that the top of the wall, at least in this section, was wider that some of the roads we'd been on!

Immediately south of the Ferryquay Gate stands the Artillery Bastion, with two fantastic field guns poised the defend the city. 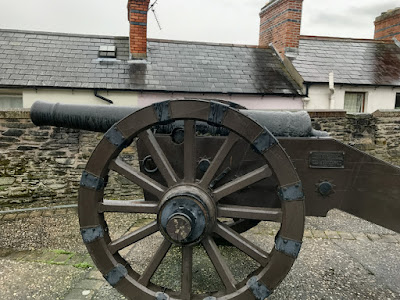 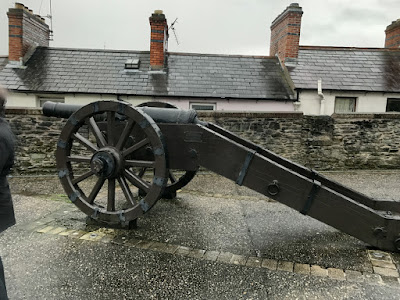 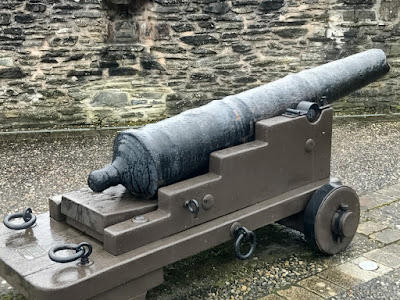 Each gun is original, though the carriages are reproductions. Each bares a plaque stamped with information on the gun, including who provided the weapon to the town. The first demi-culverin above was provided in 1642 by the Worshipful Company of Salters and weighs over 2700 pounds (and we wonder why our wargame toys can't just be repositioned at the whim of their commander). 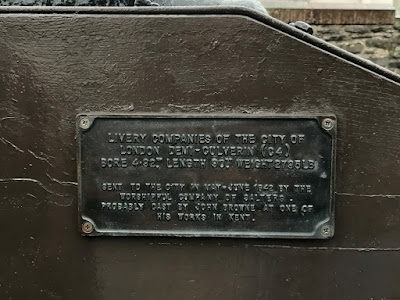 At one corner of the bastion, and at other points around the walls, was a tiny turret watchtower. A small plaque proclaimed these were constructed because soldiers complained about having to stand watch in poor weather. Bob and I thought they would be a fantastic bit of detail to add if one were to, say for instance, be building a model of the walls of Derry... 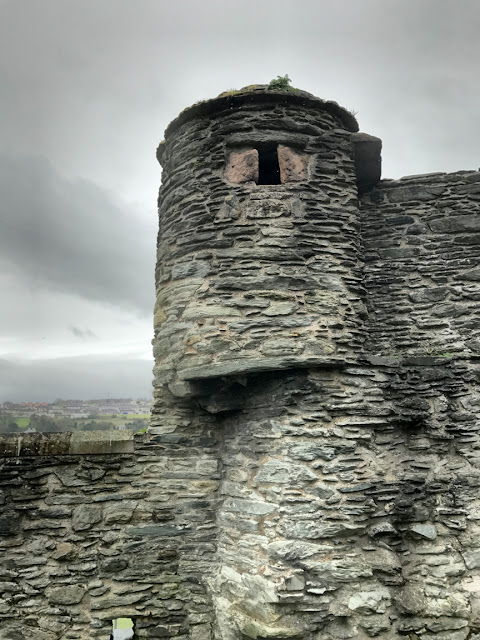 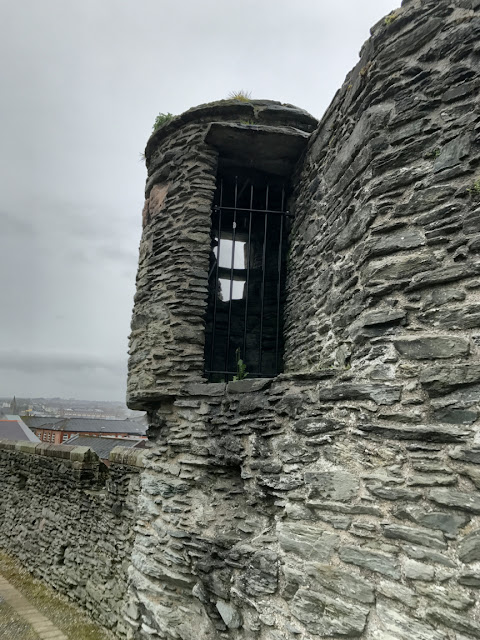 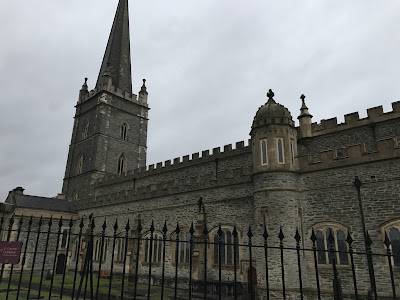 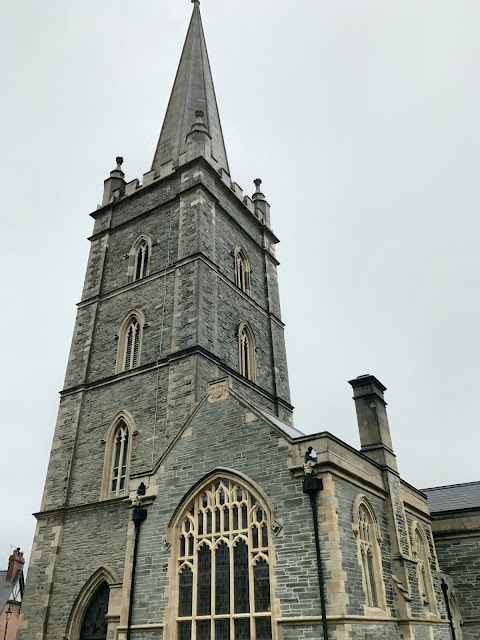 The spire on top of the tower wouldn't have been there in 1689. Barry and I were actually going to walk by after examining the exterior (heathens!), but Bob suggested we talk a trip inside. What a great suggestion that turned out to be! 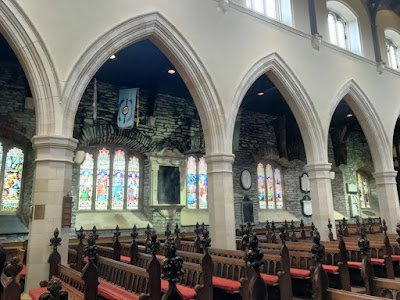 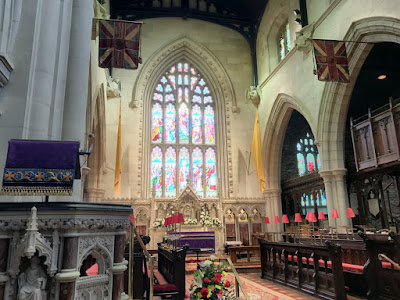 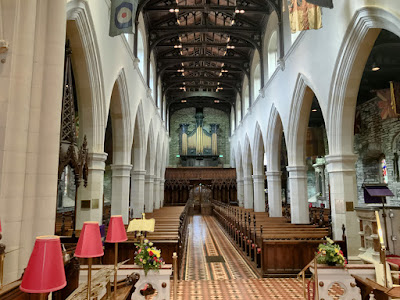 Two wonderful ladies at the entry greeted us in the role of typical tour guides. Upon finding out I was from America, she took us forward to view a 48-star United States flag stored under glass. It use to hang among the banners in the cathedral but had deteriorated to a point that it needed to be placed in storage. It had been presented by the US Navy in 1945 to commemorate the US Naval Base that was in Londonderry from 1942 to 1945. Somehow I managed to not get a picture of it. 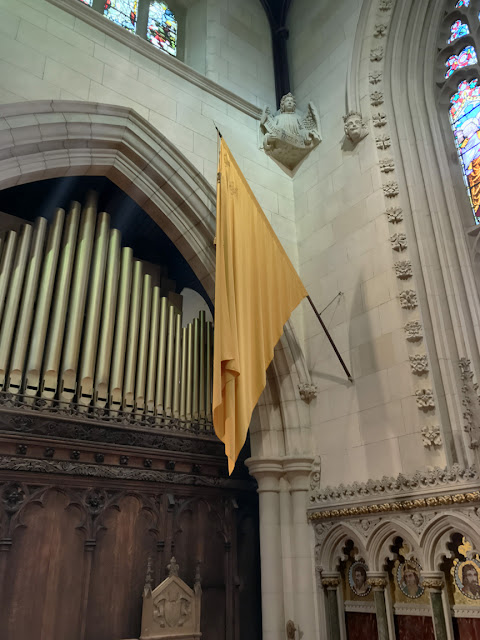 One of the flags I did get a picture of was a reproduction of flags from our period according to the official literature...

Two flags captured from the French on the 6th of May 1689 at the Battle of Windmill Hill. The poles and embroidery are original. The fabric has been renewed on four occasions.

Now, Barry and I were ready for this. The research we did for the Uniform Guides of the Siege of Derry didn't suggest any French were present in Ireland at the time. Barry asked about the origin of the flag and when the lady seemed unsure, she said she would get 'Ian' who would know more about it.

Shortly thereafter, our 'New Mate Ian' arrived and learned that Barry seemed to know more about it than he did. He was delighted to find how much interest we had in the siege and how much we seemed to know about the period. He excitedly started taking us to bits of the cathedral that were roped off to view plaques about the flags. He explained, they weren't sure the flags were yellow and may have been white instead. One plaque commemorated the restoration of French flags, but he showed us an older one that referred to them as Jacobite flags. He hadn't noticed the discrepancy before as was puzzled as to why the origins of the flags seemed to change.

In any case, he was now having as much fun as we were. He led us back to a room full of display cases and proceeded to open them and hand out the priceless artifacts for closer examination! 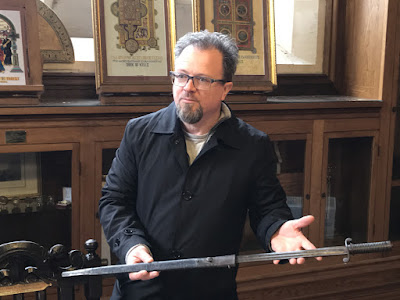 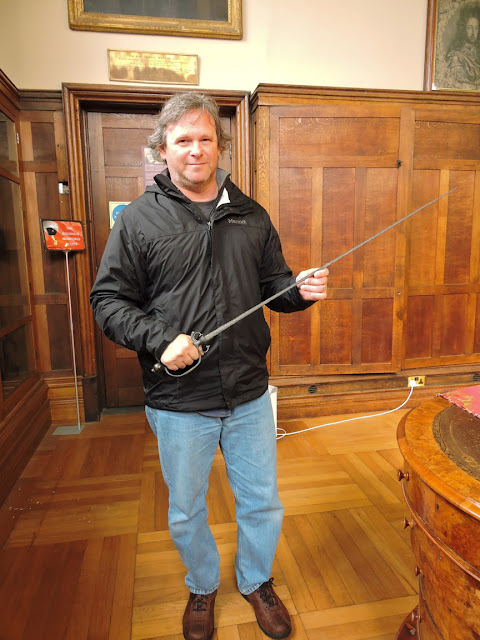 At the top, Barry holds the sword of Rev. George Walker and below I have Captain Adam Murray's (more on that later). There was also George Walker's Bible, Captain Murray's pocket watch, snuff box, and a brace of buttons from his coat, cannon balls, more swords, old maps - again, I got so enthralled I didn't snap more pics. We also got to hold the actual locks and keys used to secure the gates against the Jacobite attack - something even King James didn't get to do (pic below is from the web... I think Barry got a shot of the actual objects)! 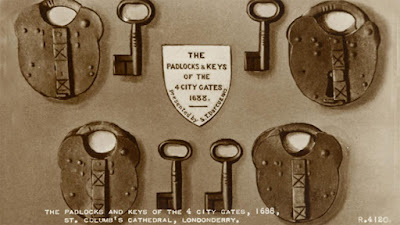 How many people who visit the museum of St Columb's Cathedral get the chance we had? How many who visit ANY museum? Barry and Ian exchanged contact info (We sent him our PDF uniform guides and he sent us stacks of archive photos). I left feeling the trip to Londonderry had already been worth it. Great idea, Bob!

Back on the wall, we made the rest of the circuit. We also visited the Apprentice Boys' Memorial Hall (where we saw ANOTHER sword of Captain Murray - well, he probably had two) and the Tower Museum. These were worth the time spent, though not as good as our trip to the cathedral. Photography wasn't allowed so I didn't bother trying to sneak any photos. 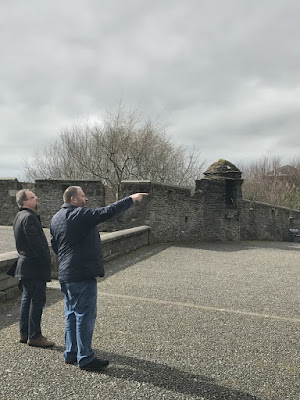 We made a trip down into the streets to a cafe for 'tea' (I had Pepsi) and then headed south to Enniskillen. That night we met Clibinarium (the talented sculptor of Warfare Miniatures) for dinner. Not only did we have a great meal, we got to see the new sculpts for the upcoming GNW Russian artillery crews! 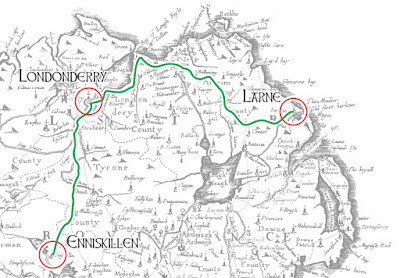