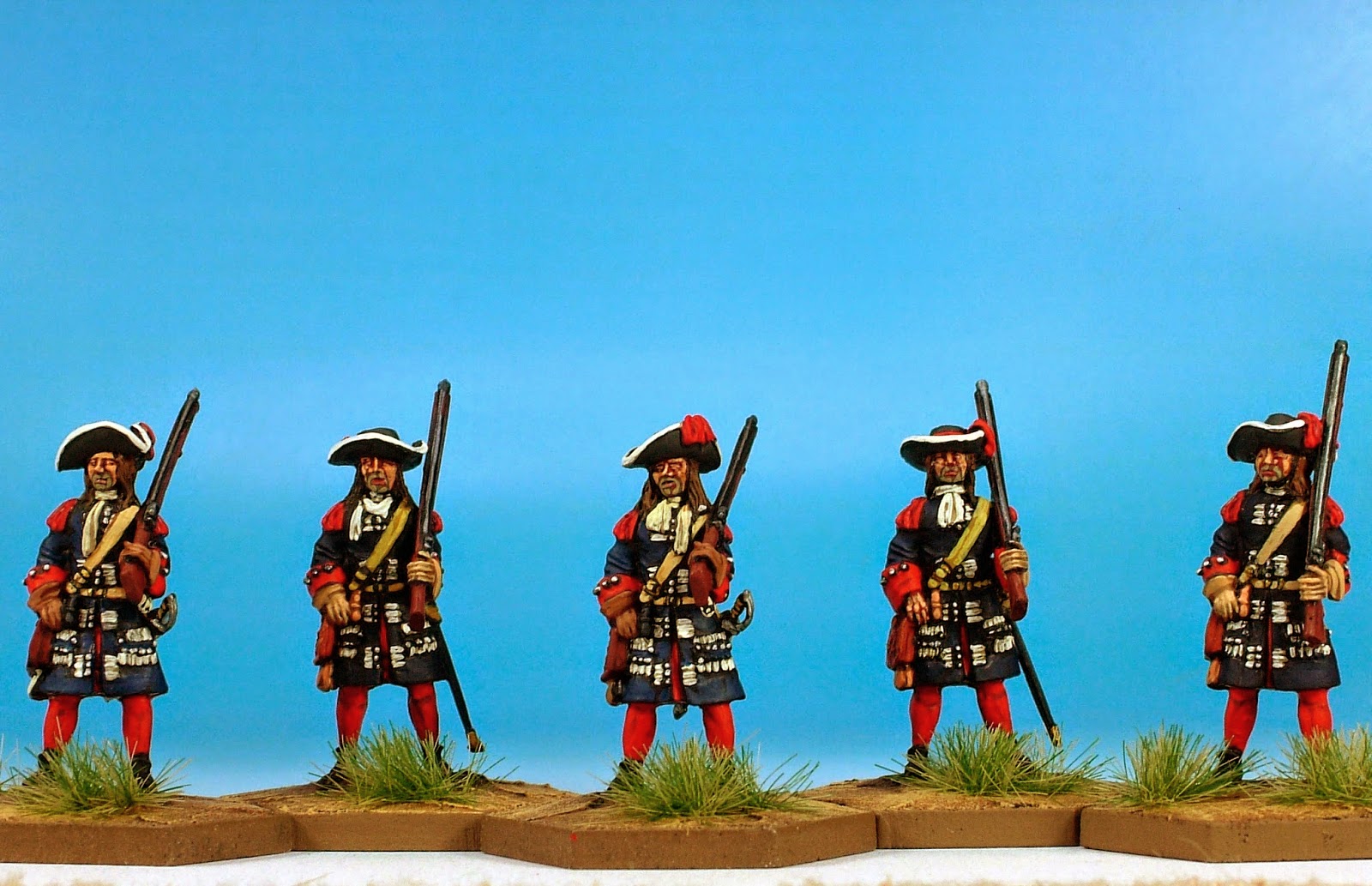 I was frustrated that this important code together with the pikemen and the command were released at a bad time for me. I had so many other things on that the best I could manage was a coat of grey primer. Hardly an appropriate coverage for the King's Household troops! And so it has stood for months, a single NCO painted and no complete battalion to show off. Despite my poor marketing the codes have proved very popular and have already gone a long way to recovering their development costs. I am now working to yet another deadline - SALUTE 2014. This however directly involves the Maison du Roi as I am painting a sample unit for the display cabinet. Warfare are also offering a nice bundle deal at the show with a battalion plus artillery, defence works, generals and flags for £50 so the pressure is on once more! 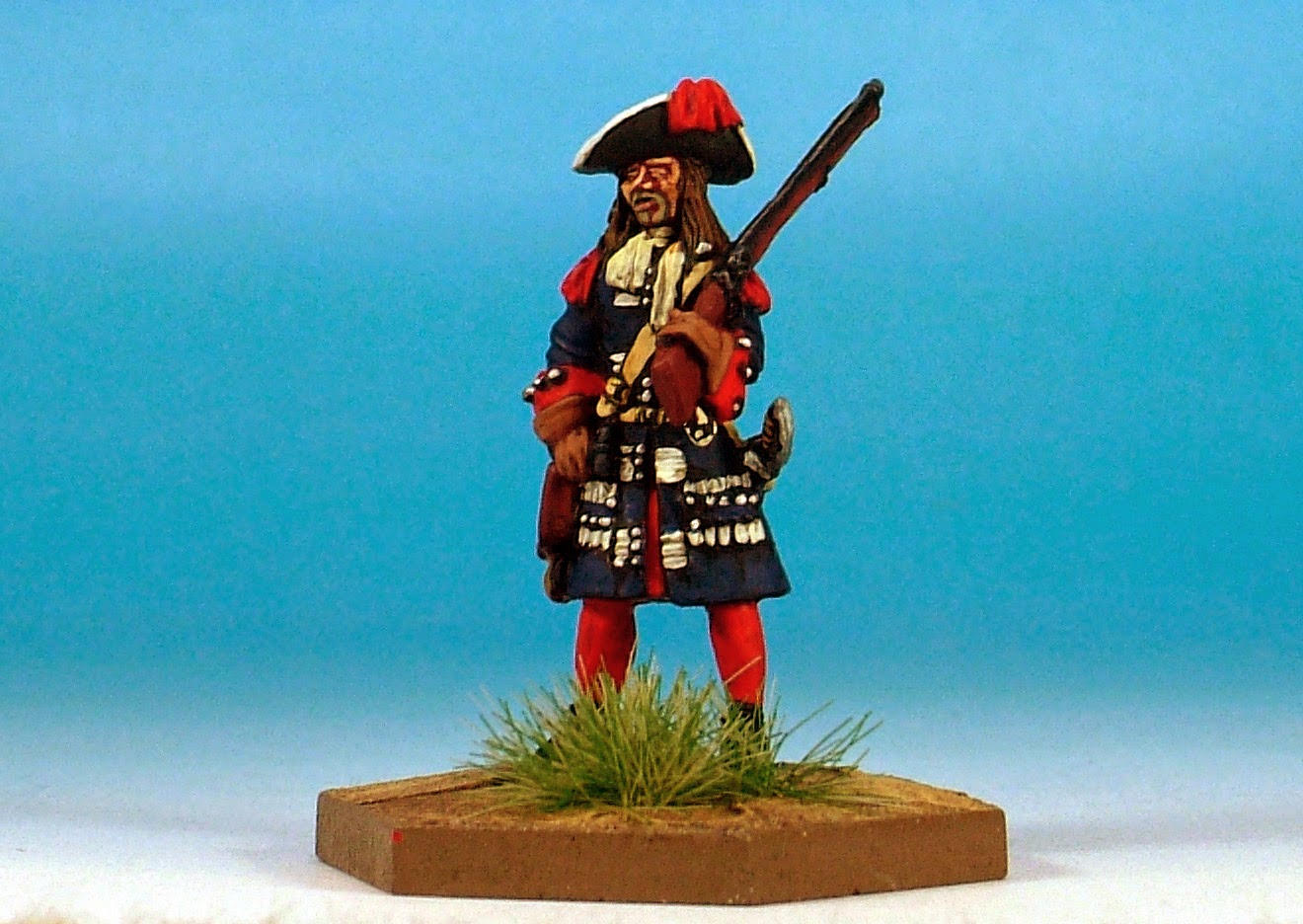 The brief during design was to make them appear like veterans. A confident, slightly contemptuous look with the officers as grand as a French noble could be! Clibinarium fulfilled that brief excellently providing us with haughty looking, long haired combat veterans - Scourge of the Dutch! 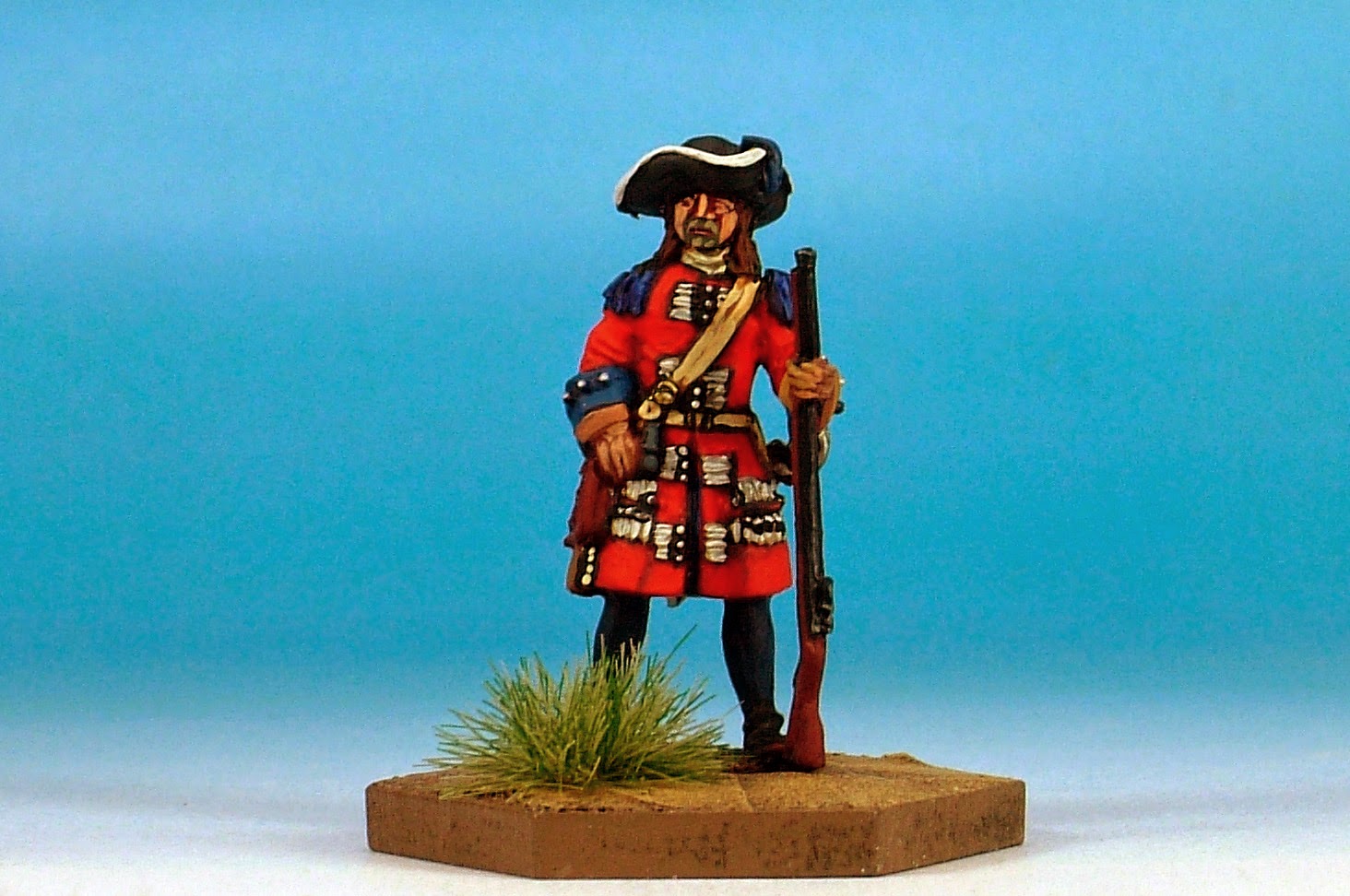 The pose chosen for the musketeers is from a formal drill pose illustrated by Giffart. I chose to paint the musketeers in a dark blue which I prefer as a uniform coat colour to the mid blue often highlighted up too much in my opinion by painters of miniatures. The reds are probably too vivid but provide an excellent contrast to the flat tone of Midnight Blue. I gave up using pure White long ago after some conversations with Pat Connor, a painter who I greatly admire. Pat switched me on to Off White, Ivory and even a very Pale Sand colour in lieu of White. 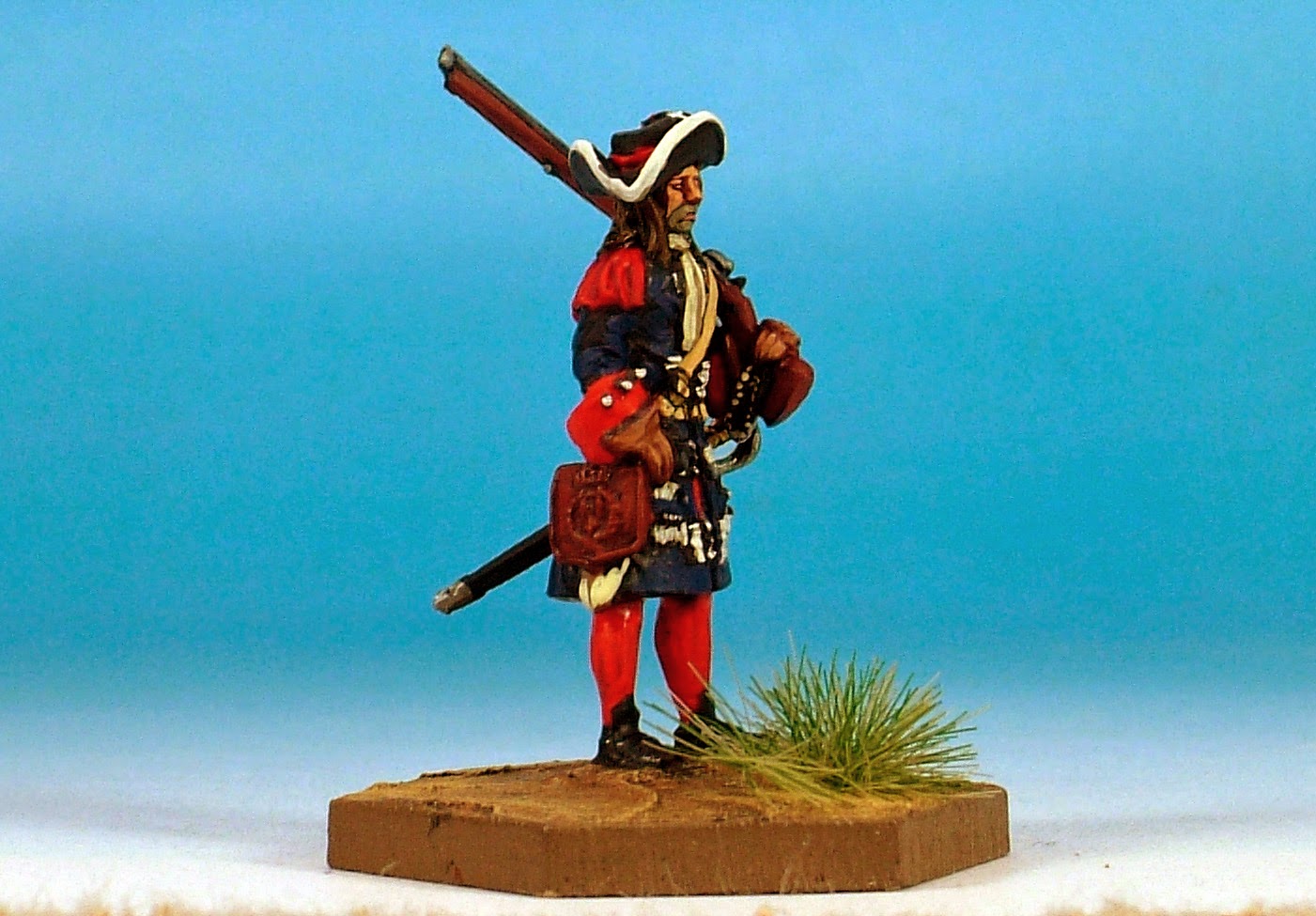 At the same time as I was painting up the Gardes Francaises I had a go at a few Gardes Suisses. I used my traditional approach on the red - Cavalry Brown followed by a Cavalry Brown-Vermillion Mix, followed by Vermillion and finished in Scarlet. It is quite dramatic but I have used it many times over the years and really stands out on the table. The arm variant positions combined with the choice of Matchlock or Flintlock weapon allow for a wide variety of options for the Maison du Roi. From early 1680s to early 1700's including a transition between the two weapon types - all combinations are possible. I favour a mixture of Matchlock and Flintlock between companies. 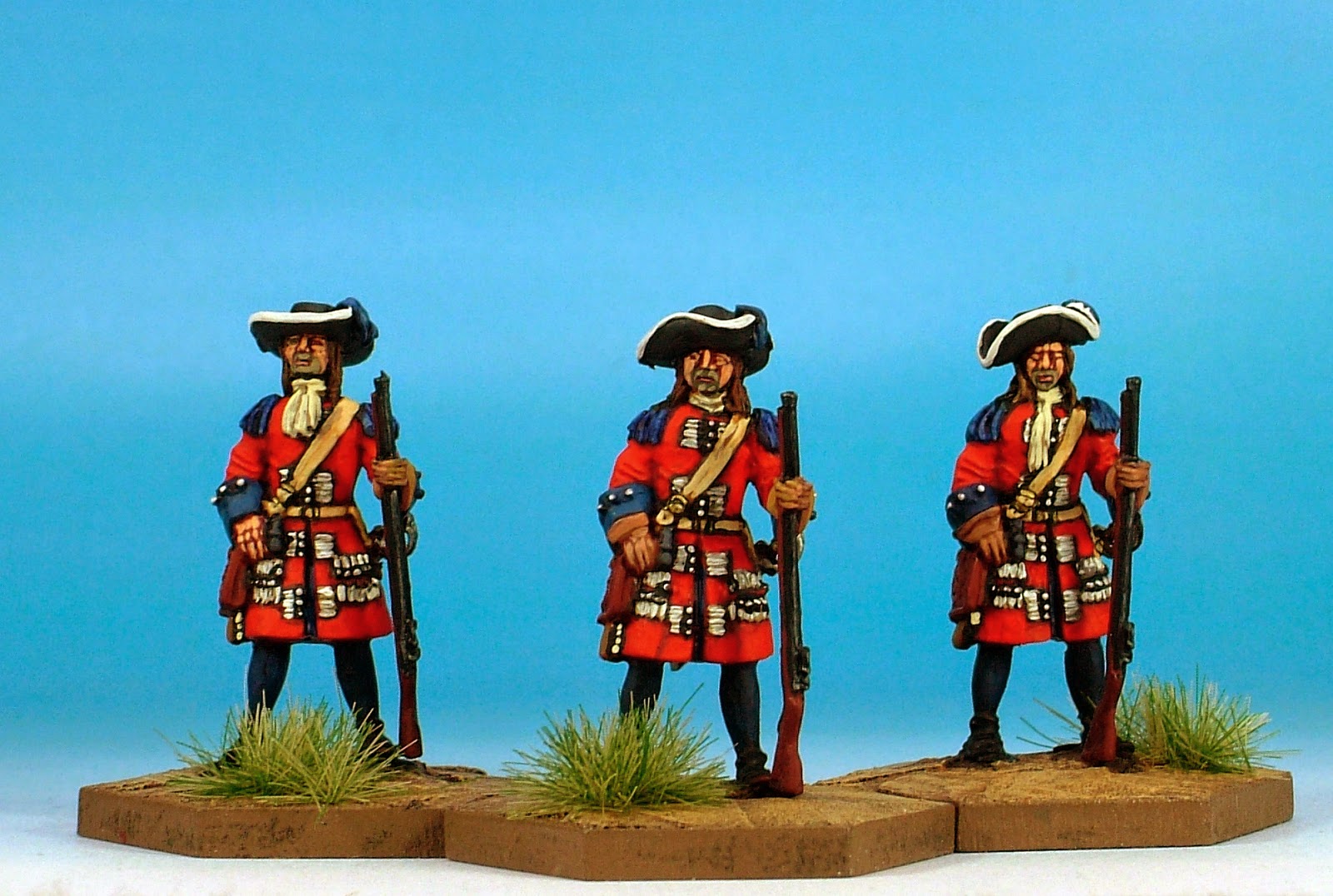 We plan to do the Attack of the Maison du Roi at Neerwinden on the demo circuit this year so watch out for massed French Guard battalions at Newark and Edinburgh... The Dutch will be quaking in their clogs! 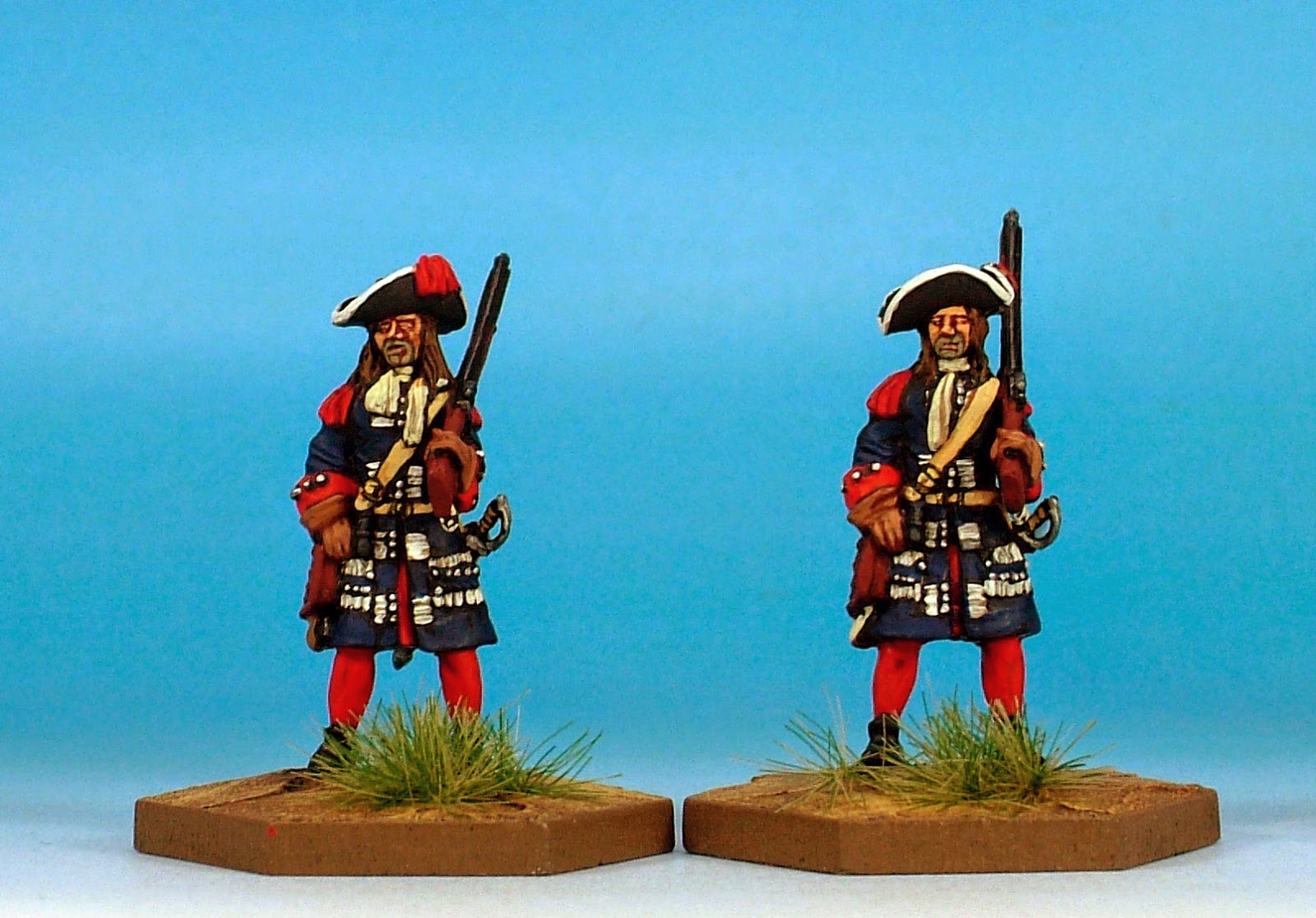