Barry Hilton - This code is a little gem. The poses are versatile enough to be grouped together producing interesting combinations. They are also useful in a variety of other situations such as units deployed in 'Firing Line' or in vignettes.

The equipment and dress is generic enough for the models to be used for a wide variety of nationalities as with code WLOA1.

The shot of Prinds Georg's Danish regiment at left can be contrasted with the same model painted as Dutch Regiment Nassau Walen, the Finnish Regiment Kalmar and a white coated Jacobite recruit from Ireland in the 1690 period.

Pat Connor has done a fine job here detailing one of several interpretations of the dress of this regiment. Other interpretations have them in the same colour of grey coat but with orange cuffs, waistcoat and stocking.

A further interpretation which appears later in the series shows them in a green coat but with the facings in orange.

In this picture the figure has been painted s a Dutch regiment of Foot from the same period.

Some small changes which can create significant difference in appearance are; a change of neck cloth colour and a change in the shade of materials used from straps bags and equipment.

The absence of hat trim around the brim of the headgear alters the appearance as does the plug bayonet sheath painted in a different colour.

Darrell Hindley painted this chap from the Finnish Kalmar Regiment.

I believe he may have gotten the uniform colours from Karoliner which is a book about the soldiers serving King Karl XII of Sweden.

This colour scheme is not the Swedish blue of the Great Northern War but rather an earlier scheme from the Scanian War 1676-1679.

The Duck Egg blue that Darrell used for cuffs, pants and stockings is a nice contrast with the brown coat colour.

This version of the same figure is very plain and done in an 'off-white'. He I now part of one of my Irish Jacobite regiments but could be used for several other nationalities with this colour combination.

The equipment detail on this model is excellent and makes for an interesting look from various angles.

With the first set of sculpts completed the swords are integral to the models. This limits the body positions which can be cast successfully and so  from the design of the Grenadier codes onwards we have cast the swords separately to allow a wider variety of poses and weapon orientation to take place. This was an evolutionary step in the Warfare range.

The next pose is painted in the colours used by English regiments of  Foot Guards. This pose is equally at home as a sentry or in a firing line mix. 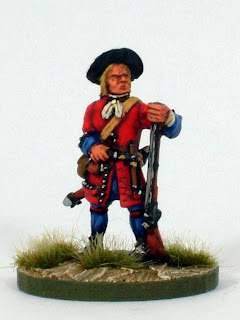 The next variation up had a hat brim with which much can be done to change the look of the model. Because it is even all of the way round it can be folded in any combination to offer  different permutations. 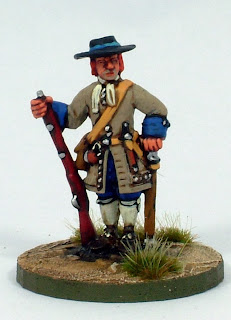 Fourth up  also shows great character. The body dolly is the same one used for the previous model but the pose is quite different. Again this model would look equally at home in a variety of units in terms of pose mix.  He was painted as Dutch Regiment Van Bulow by Brian Philips. 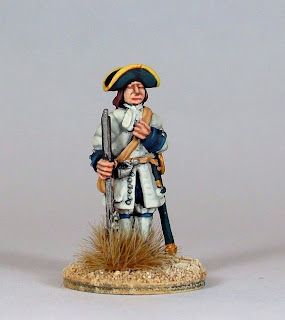 The final model of WLOA2 offers more variety with a very straight on pose. 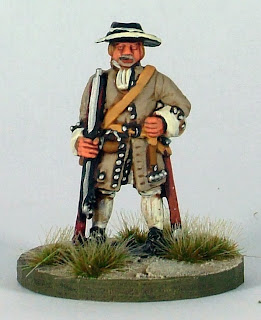 To conclude this feature on Warfare code WLOA2 Musketeers At Ease  a shot of what can be done with the pack when placed in combination in a unit. This regiment is part of my Jacobite  Army for Ireland. The carry the colours of Lord Gormanston. 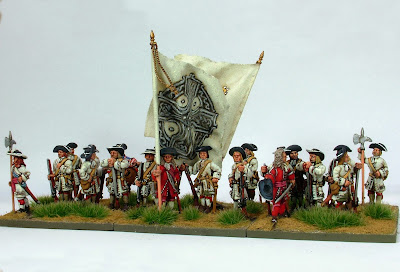 And a shot of them painted as the Williamite Regiment Sir John Hanmer's by Kris Allsop who has done a fine job. 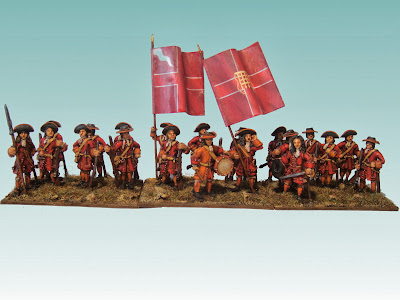 ﻿﻿﻿﻿﻿﻿﻿﻿﻿﻿Clarence Harrison - I use some of these guys as second rankers in my firing line units for variety, but these models have an aspect of determined calm that rises above just standing about that makes for unit with as much drama as the ones with more action poses. Again, there are a few models from other codes, but the core of each unit comes from WLOA2.