Following on from the recent preview of Tatar cavalry, the new mounted cossacks are nearing completion. Though obviously close to the Tatars in space and time Cossacks undoubtedly occupy a more prominent place in Western culture. Though not everyone you could meet would necessarily know who the cossacks are, most would have some vague notion that they come from Russia at least, or they might have seen their dancing. Few would have much notion of the Tatars, except to have perhaps heard of Tartar sauce.

Again like the Tatars you can probably use these figures (depending on how fussy you are) for a hundred years before or after the intended Great Northern War. In that war Cossack troops fought on both sides so are immensely useful figures to have on hand.  The Zaporozhian Cossacks under Mazepa sided with the Swedes, an act that the Tsar never forgave, and they suffered for it. Peter considered it a personal betrayal and had the Sich destroyed. The Great Northern War Compendium has some interesting coverage of battles away from the main theatre of war (the usual Swedes-vs-everyone).

As mentioned in the previous posting the Cossacks and Tatars have been designed to use the same horses. For that reason, in order to make them versatile, the horses have not had much in the way of decoration that might tend to suggest the identity of the riders- so they are somewhat generic.
Though  Cossacks were no doubt pretty individualistic compared to Western European armies, they still formed cohesive military units. There is a tendency to think of them almost as mounted pirate crews, and while no doubt they loved plundering as much, they have a fairly consistent appearance. While by no means uniform they did have common elements to their dress and equipment.


The figures
As with the Tatars, these guys have been given a fairly uniform appearance, so that where possible they can be put together in many different combinations. That does give a lot of variety but does oppose a certain level of restriction too. Break-waist figures make for nice variants but only work with figures that can be broken at the waist, for instance where there's a belt or a sash. Where an item goes across that imaginary line it causes a problem- it can't easily be done with figures in crossbelts for instance, and its why these figures do not have pistols tucked into their belts.
I've tried to keep the equipment relatively simple so the painter is not weighed down by multiple belts and such.

In these photos, I have mostly left off the slung muskets and swords, partially because they have to be stuck on, and I don't want to do that to greens, and partially because it makes photography extremely time-consuming. Most figures have a sword for their left hip and a musket for the right. For sword-wielding figures you'll need to snip the hilt off the sheathed sword to give an empty scabbard. 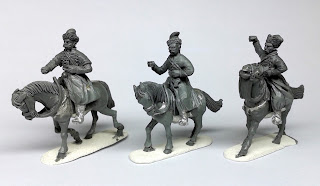 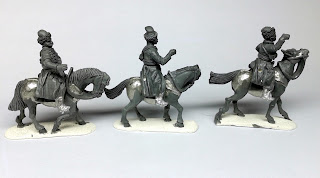 The first basic set depicts Cossack lancers, shown here on advancing horses, but could just as easily be put on the running horses. These work for a more sedate unit, not in the thick of the action. They are actually the last figures in this set I sculpted, almost as a bonus, as they are only really the top halves, added on to already designed break-waist lower halves. The same bottom halves can be seen in the next set of firearm wielding figures. 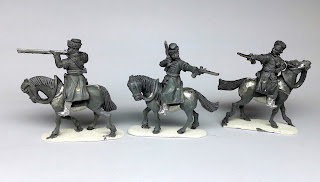 These figures, two armed with pistols and one with a musket are all break-waist so the top halves can be rotated to get various different poses, though as mentioned with the Tatars, you need to keep in mind that the human torso only has so much twist in it before the pose will begin to look odd. 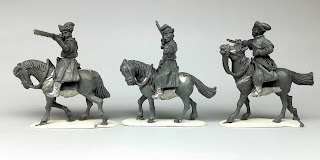 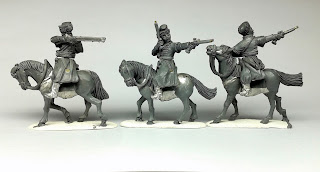 This next set was originally intended to be the more sedate group (as those in the first set of pics ended up being), but I thought that they looked quite good as active figures. They have plug-in sword arms to allow a bit of variation, as you can see just swivelling the arm without changing it gives a slightly different look. 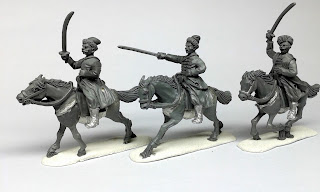 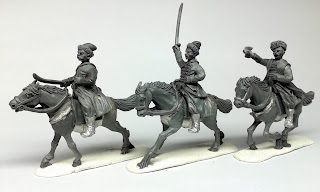 There will also be a set of arms to plug in for lance armed figures. Hands will need a little drilling to give a firm seat for a wire lance. 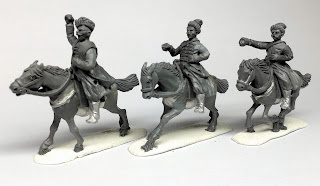 Finally my favourite set, quite similar to the previous set (and use the same plug-in arms), but they lean forward to give a more determined look. 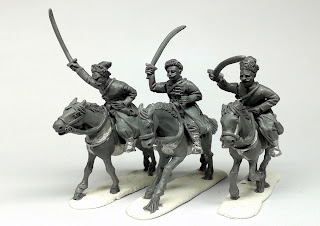 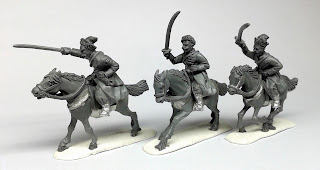 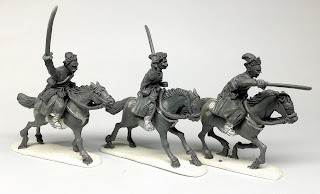 At the last moment, I decided to add some more arms for variety, one with a whip and two with warhammers. 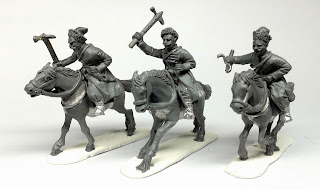 For the sake of clarity, I've added some pics of figures with the swords and muskets attached. As you can see the swords have ugly runners attached which obviously don't go on the final figures. For the musket armed man, I added a plug-in sack as two muskets would make a lot of sense. 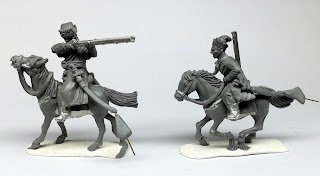 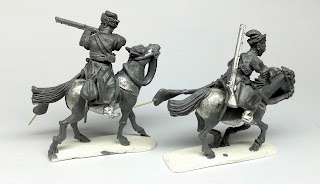 One could also attach the archery equipment from the Tatar sets in these holes, to give bow armed Cossacks, if you are happy to ignore the conundrum of why there are powder flasks and such on the resulting figures.


I hope you've enjoyed this preview. As with the Tatars we may add variants of these figures to give earlier mail armoured figures or better dressed and armed, richer men.