by Barry Hilton December 03, 2013
Here are all of the test sculpts brought together in a colourful montage of what is to come. This experimental phase was undertaken to give us a feel for the best way to go forward. 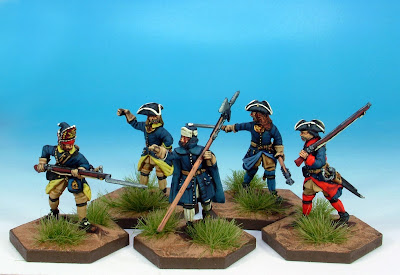 From this group of Swedes three body dollies have been selected to form the basis of infantry codes. These dollies will be supplemented by a further five to create the anatomical core of the Swedish rank and file. The master sculpts which produced these figures are now being cannibalised (I know, criminal sounding isn't it!). The above models will all be commercially available at some point in the future. 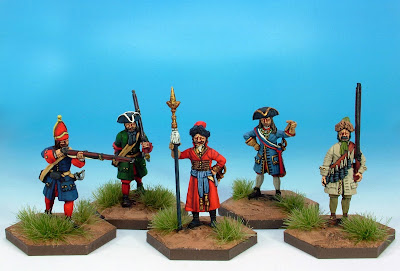 From this group of Russians three body dollies have been selected to be at the heart of the Russian infantry options. These will be supplemented by a further four dollies. Officers for both armies will be treated separately with many of the sculpts being unique and not reusable from a body dolly perspective.
The musketeer on the far right of this group will reappear in western European garb shortly and provide a  useful addition to the Warfare Miniatures offer for the Nine Years War.
Exactly how we will approach the early war Russians has not yet been finalized but is in discussion.
Our investment group has accrued enough capital to make this project substantial. A late arrival group has further swelled the coffers meaning further options have opened up. To that end, any other interested parties can still be involved if they have a minimum of £250  GPB to invest, Please contact wordtwister@hotmail.co.uk .
Share Share on Facebook Tweet Tweet on Twitter Pin it Pin on Pinterest
Back to The League of Augsburg