As a follow on from the Ottoman Sipahis recently released, I've been hard at work on some Tatar cavalry.
Though the idea to add them to the range was originally as a supplement to the Ottoman forces, they certainly can be considered to be an important power in their own right, being a major headache for the fledgeling Russian state, and the major power the Crimea since the 1400s. The figures can perhaps be used for Tatars in general, though intended for those relevant to the wars in Eastern Europe, the term Tatar refers to an ethnic/linguistic group, and there are different subgroups within; Volga Tatars, Crimean Tatars, Siberian Tatars, Lipka Tatars (those settled in The Polish-Lithuanian territories). For more detail on the different groups, have a look at the Wikipedia entry.
The Tatars are one of those peoples who, despite their importance, are quite hard to research in terms of appearance. I like to work as much as I can from period artwork. Of course, I appreciate a good modern reconstruction, (especially if it's done by my art hero, Angus), but I always feel the need to see what the reconstruction is based on.

The tricky thing with the Tatars is that while depictions do exist in period art, it's hard to get a sense of what they looked like at a specific time. While it seems that they broadly had very stable clothing and equipment over a long time, I imagine there were trends in the detail over time and this not something that can be easily pinned down. With that in mind, I had to go for fairly broad strokes and make figures that were not terribly specific. While that irks my sense of accuracy, it has the side effect of making the figures useful for times that pre-date our period, and probably post-date it as well.
One thing that wargamers want out of steppe-people armies is variety, and trying to achieve this on a sculpting budget that isn't infinite requires a bit of imagination. As established in the Sipahi range, plug-in arms and break-waist bodies go a long way to achieving this effect. However this does impose its own limitations- the clothing has to be consistent between figures as the arms have to match the rest of the figure. If you look at the Sipahis the arms on nearly all figures have the sleeves rolled up.
In this case, I decided to give the Tatars the padded jacket that seems to have been common. Long silk kaftans seem to have been widespread too, and if there is interest I'll probably convert these figures to that mode of dress as well.
An interesting depiction of Tatars appears in the battle of Prostki from the 1974 film Potop ( The Deluge).

The figures
All figures in the following photos are wearing the long padded jacket and have a bow quiver and sword on the left and an arrow quiver on the right. These pieces of equipment are quite tricky to do as they add quite a lot of complication to the figure. The bow quiver is quite big and I might continue to slim them down. The problem is that the bow must be oversized to cast well, and then the quiver has to be big enough to believably house it. There may well be alterations to the figures so these should be considered work-in-progress

This has been a pretty difficult subject to work on as fitting the equipment so it doesn't get in the way of other bits and pieces has caused me no end of headaches. Figures with multiple parts do come with the downside of being a bit fiddly to put together but open up so much possibility in terms of variation. 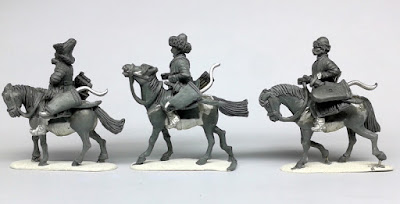 The first set is of Tatars with upright lances on trotting horses, though they will fit just as well on the running horses shown below.  These have the advantage of being less complicated than the figures that follow.

These figures are break-waist, as you can see they can be rotated to give slightly different poses. While they can be rotated around like a tank turret, it's important the gamer keeps in mind that this should be limited to what is believable for the human body. For these figures, the bow should be clipped off the bow quiver (though arguably carrying a bow and a spare was a common practice).
The above figures are the same as the previous set, just with the upper bodies replaced. Again rotation within reason is possible, though the middle figure will only make sense if he is reaching for the arrows in the quiver. 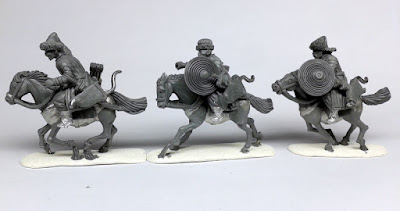 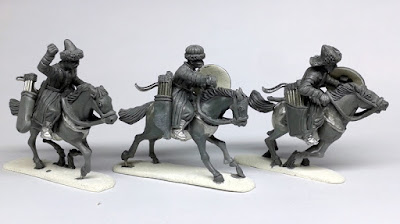 These figures have plug-in arms that can be changed around. Those in the pictures are for lances, there's also a set of arms wielding sabres (in which case you should cut off the hilts of the sheathed sabres), which I neglected to photograph. The shields are optional.


I've done a set of seven horses, intended to capture the smaller steppe breeds that these cultures used, I've kept the furniture to a minimum as they'll also serve as mounts for the cossacks who will be the subject of the next preview shortly.
Anyway, I hope you've enjoyed this preview. If the range does well once it's released, we may well convert the figures to have sets in silk kaftans as well. We are also thinking over adding more armoured Sipahis which could easily double as Tatar nobles who were often equipped more heavily than the ordinary Tatars.
Share Share on Facebook Tweet Tweet on Twitter Pin it Pin on Pinterest
Back to The League of Augsburg