Wargamers' Uniform Guides for the Siege of Derry 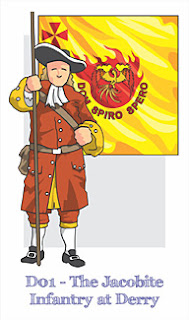 Clarence Harrison - Following on the heels of the well received Uniform Guides for the Battle of the Boyne, we are happy to announce the next series - The Siege of Derry!

There is more text in this series to cover the how's and why's of the decisions we made, as well as a bit more about some of the battles that took place around the walls during several months of fighting. It was challenging because even contemporary sources disagree or contain likely embellishments (in the famous George Walker text, he manages to be at the pivotal point of every engagement). Information was culled from a dozen different sources and Barry tried to drive me mad with revisions (I kid you not... the published document of The Battle of Pennyburn Mill was version 10 and we did a final edit after that) so we are confidant that you won't find a more comprehensive guide.

The PDF's are available individually or as a set on the League of Augsburg shop. You can download a free sample from the Boyne series here.

Here are pics of the copies I printed... 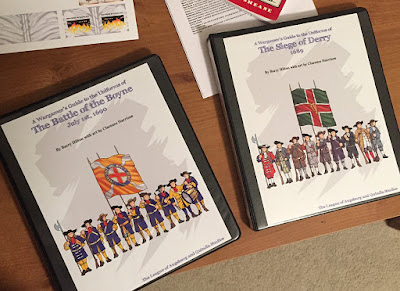 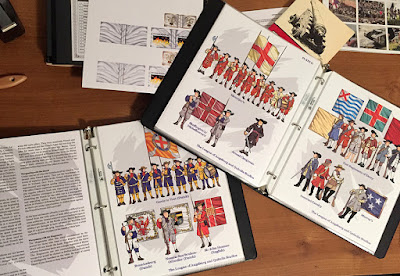 I printed the uniform plates on glossy photo paper and the text pages on quality bond paper. They are inserted into 3-hole punched plastic sleeves and placed in a binder. Now, I'm fussy about such things and it bugged me that the sleeves with only bond paper felt flimsy next to any with a sheet of photo paper. To 'fix' this I placed blank sheets of card stock in those to bulk them up. Yes, well, it made me feel better...

... and no, those cover images aren't available at this time. Just use your favorite image for now. I made them for my binders because... well, see the paragraph above. It's an illness. The spines even have titles!