More on this later but to kick off, I set up a small battle using five ships per side and set it during the campaign which culminated in the Battle of Salamis.

Near Skiathos a small Spartan scouting force looking for the advancing Persian fleet contacts an Egyptian van squadron undertaking the same activity for the Persians.

Both sides are equally balanced with the same combination of ships - three Triremes, an older Pentekonter and a scouting Triakonter in each fleet. I varied the crew experience on the vessels between fleets. I am using a proto set of galley warfare rules using many mechanisms familiar in Mad for War.

The Greeks had to immediately change course to avoid being flanked. The Egyptian scout doubled speed and raced ahead to force a Greek response. Very soon the two small scouting ships were in combat as the Spartan vessel failed to board but the more skilful Egyptian crew were able to grapple and locked both together.

The Spartans formed line abreast whilst the Egyptian flagship veered off in an attempt to flank the Greeks.

Eventually the Spartan scout ship was overwhelmed when all aboard were killed or wounded. She was captured. A veteran Egyptian ship raked the oars of a supporting Spartan trireme and as the Greeks attemped to neutralize this threat their pentekonter was rammed amidships by another Egyptian ship. 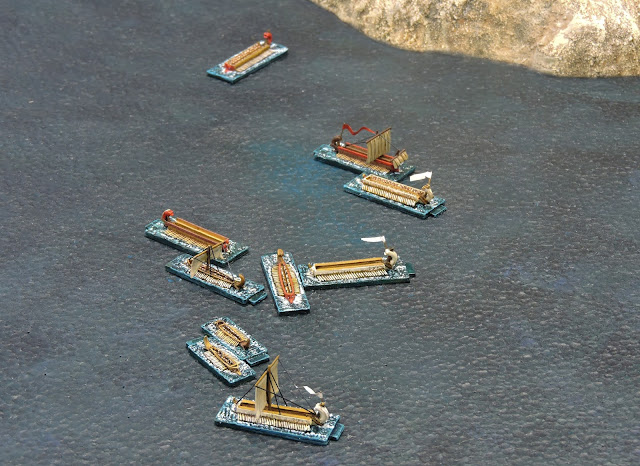 A similar raking move by an inexperienced Egyptian crew on the Spartan flgaship resulted in them losing some of their own oars! For much of the battle the Greeks fared badly. They lost their two lighter ships quickly and only redeemed the situation when a well handled trireme overcame the enemy pentekonter which also contained the Egyptian Hero who was cut down when his ship was taken.

The wary Spartan admiral backed away and boxed his ship in against the island with two enemy triremes failing to board after repeated attempts. The late arrival of the Egyptian flagship created the finale with  two remaining Spartan vessels putting up a great fight but eventually being overwhelmed.

Victory to the Persian Empire!  All done on a 2 x 2 table and taking about 60 minutes to complete. Game had 8 turns.