Whiskey in the Jar-oh! Part 5: The game


What happened? I had originally started posting this seven parter back in 2016 but for some reason never posted the final three parts which I have just come across and realized they were finished!
So, picking up from Part 4 which you can link back to here:

Whiskey in the Jar-o Part 4

Here is Part 5 to be followed closely by Parts 6 and 7.

The game is a large scale skirmish and so I have assumed that the ratio of men to models is about 10:1. This makes the bodies of Horse about 60 men apiece around the size of 2 troops or a small squadron. Any rules could be used and logically I used the company level version of Beneath the Lily Banners.

All troops begin the game mounted and in column of march. The start positions are marked on the map. The Williamite Dragoons are in 3 groups of 2 squadrons and can be from different regiments or a single unit. Each dismounts as 5 models and 1 horse holder who cannot shoot unless the horses are turned away and not used again in the game. Players may place the officers with whichever squadrons they wish up to the number available with each troop type. All of the Williamite Horse begin together in a mass of 6 squadron columns. The Jacobites begin in a similar way in 8 squadron columns 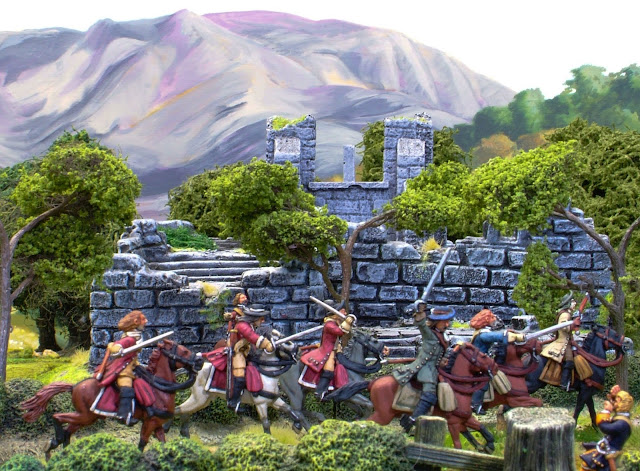 The woods should be treated as impenetrable to mounted troops and so will channel the cavalry towards gaps. The hills will provide an uphill bonus in combat to those on the higher ground. They will provide minus D3 inches on movement going up but have no effect on the downward slope. They will not cause disorder. The high pass over the central hill should allow a squadron to pass in line of battle through it without hindrance. The cottage should be represented by an un-enclosed peasant dwelling that can house one dismounted squadron. Dismounted dragoons may move through the wood at normal speed and are not disordered when shooting from the woods. Visibility in and out of the woods is as written in BLB3. The dragoons are assumed to be moving in open order as per the rules covering loose order troops in BLB3 The War of Three Kings.

The River Shannon is un-fordable except at the point known at the beginning of the game only to ‘Galloping’ Hogan.  The 6 potential crossing points should be marked on the table with a small pebble at the side of the river. They are numbered and shown on the map. The Jacobite player dices to determine the crossing point using a D6 before the game begins and should write it down. He also has some extra options under the special instructions for ‘Galloping’ Hogan. To cross at the ford the Jacobites need to be in column of march once more.