Tatars- a preview.
As a follow on from the Ottoman Sipahis recently released, I've been hard at work on some Tatar cavalry.
Though the idea to add them to the range was originally as a supplement to the Ottoman forces, they certainly can be considered to be an important power in their own right, being a major headache for the fledgeling Russian...
Posted in Beneath the Lily Banners, News, Ottomans, The Great Northern War, The War of Three Kings, Warfare Miniatures, Wargaming

Bit of a clean up.. Ottoman cavalry go for production


This fantastic range has been dogged by little challenges along the way. Some related to design, some to production, others to me actually having enough time to undertake the fairly mammoth task of cleaning up 151 master castings of various shapes and sizes. In order to get good clean production castings a careful job in necessary in preparing...
Posted in Beneath the Lily Banners, Modeling, News, Ottomans, The Great Northern War, Uniforms, Warfare Miniatures, Wargaming

Not only did I get to sail across the very spots that Spragge, De Ruyter et al manouevred  and battled with their fleets in the 17th century, I managed to make several other tangible connections with my periods of interest during the annual sojourn to Antwerp.

by augsburgeroberst November 04, 2019
If you are into Ottoman flags or the smaller nations participating in the Great Northern Wars and War of the Spanish Succession look no further than eleven new flag sheets now available:

4 Ottoman sheets from my designs as seen here;

Brunswick, Celle, Hanover - Foot and Horse
Find them all in the shop here:
League of Augsburg shop - FLAGS LANDING...
Posted in Beneath the Lily Banners, Donnybrook, News, Ottomans, Quindia Studios, The Great Northern War, The War of Spanish Succession, Wargaming

Regiment Jyske or Jutland
Our Danish figures have proved quietly popular. Like the Danes themselves, they have gotten on with it without too much fuss. For wargamers with a practical approach the Danish army during the period 1675-1720 is a great choice. It was almost continuously at war. It can fight in theatres from Ireland Hungary. It can take the field for its...
Posted in Beneath the Lily Banners, Blenheim, News, Painting, Quindia Studios, The Great Northern War, The War of Spanish Succession, Warfare Miniatures, Wargaming

Wargames Illustrated primer on With Talon and Claw

This is another well produced video from WI walking through the new book in some detail. I didn't even know it existed till I found it by accident on YouTube!

With Talon and Claw in depth look from WI

WI is also running a couple of articles soon. One is a battle report from a game I ran for Dan Faulconbridge and Mark Shearwood (Hi Mark!). The second is a scenario for gaming the Battle of...
Posted in Beneath the Lily Banners, News, Quindia Studios, The Great Northern War, The War of Spanish Succession, The War of Three Kings, Uniforms, Warfare Miniatures, Wargaming 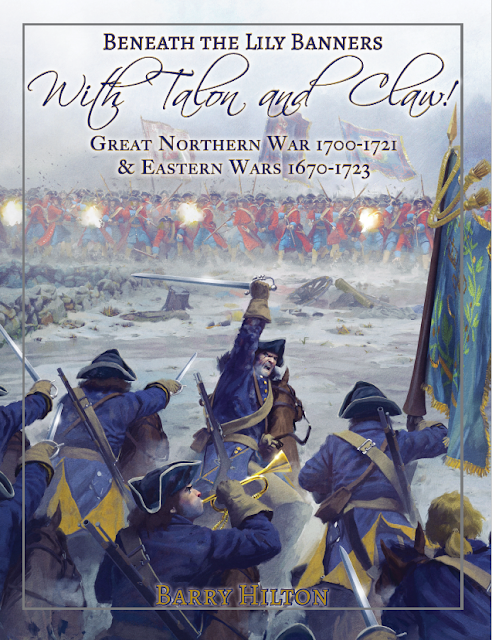 by augsburgeroberst October 08, 2019
To balance things out having shared pictures of the Russian forces massing for Crisis 2019 I thought it only right to get the Boys in Blue in front of the camera too.

Been busy talking to some media moguls in the hobby over the last couple of weeks. I did a podcast interview for Henry Hyde's Battlechat Live 32 which seemed to fly by but actually lasted two hours. Well, Henry and I are never short of a word or dozen and the experience was candid and interesting. He has a nice interviewing style which opens the interviewee up before they know it. Henry is a...
Posted in Beneath the Lily Banners, Interviews, News, Scenarios, The Glorious Revolution, The Great Northern War, The War of Spanish Succession, The War of Three Kings, Wargaming

by augsburgeroberst September 30, 2019
I set up quite a lot of re-shoots for some of the items in the shop whilst photographing some new products. I am working my way through Russian unit deals so here are some of those which are now available in the Warfare Miniatures shop combined with some existing products revisited:

by augsburgeroberst September 30, 2019
I set up quite a lot of re-shoots for some of the items in the shop whilst photographing some new products. I am working my way through Russian unit deals so here are some of those which are now available in the Warfare Miniatures shop combined with some existing products revisited: