With a little help from my friends.....

Dave and Colin came over last week to keep the campaign going. We played three cracking games with me going to pick up the fourth and fifth when I get a chance.

Quite a few people have been asking for a how to guide for painting, rigging and basing the 1/2400 scale Dutch Wars ships. So, here we are..

The contents of a pack are laid out above. The 2mm thick, 20 x 40mm pill base does not come with the model I buy these from Warbasesin packs of 20. The price I don't recall but, it is less than £2 for that...
Posted in 17th century naval campaign, Basing, Modeling, Nine Years War, Painting, Restoration and Dutch Wars, Wargaming

It's Saturday, I'll build a castle

I have several new scenarios coming up for the 17th century naval campaign. I needed something that resembled a Scottish castle. I thought - just a tower. Then, what about a tower on a rocky outcrop? Then that morphed into... maybe I could expand it to look like the stronghold of a clan chief with outbuildings etc.. yeah...

Sea mats have been very useful so far in my naval adventures and some of them are actually pretty nice. I would however, feel a bit of a phoney if I used one in a demo game at a show. This piece is a short insight into an experiment in making sea boards as opposed to the river boards I am pretty comfortable in producing.

by augsburgeroberst January 18, 2020
The walk through of my evolving naval rules for the 1640-1700 period continues where we pick the action up at the beginning of Turn 4 with the Allies once more winning the initiative which allows them to move first or, compel the French to move.

by augsburgeroberst January 16, 2020
Let me start by saying thanks to Neil Fox for helping me get onto this path in the first instance. He sent his Solebay Fast play sheets to me and I played many games with them to get a feel for the issues around naval gaming and in particular the period 1650-1700.

I bet you thought I'd abandoned this..

On the contrary my friends, or should that be Integendeel, mijn vrienden! It takes focus to get a substantial project finished and I had run out of gas with changing short term priorities after completing three of the four corners of this table during the late summer.

Some excellent photos of Swedish artillery from the collection of Russian enthusuast Alexey Kovshikov.

Alexey wanted me to point out that this outstanding work was done by painter Mikhail Mirosnik.

It shows both Warfare Miniatures and Ebob Miniatures sculpts together.

These blend very well and Mikhail has done an outstanding job in making each piece work.

Thanks for sharing Alexey.

New in the shop from Warfare Miniatures

by augsburgeroberst July 01, 2019
Some new stuff which can be found in the shop: 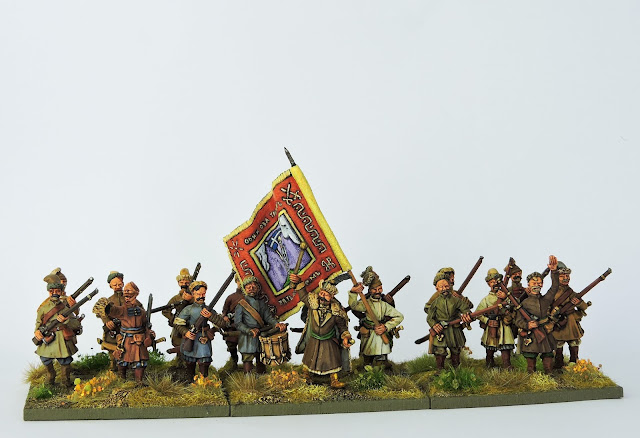 A Cossack unit equivalent to an infantry battalion. It contains three packs of Cossacks advancing (COS01) with musket and one Command pack (COS02).  Price is £31 ex postage. The flag is not included nor or are the bases.The unit pictured has 18 models but there are 20 models in the battalion pack. 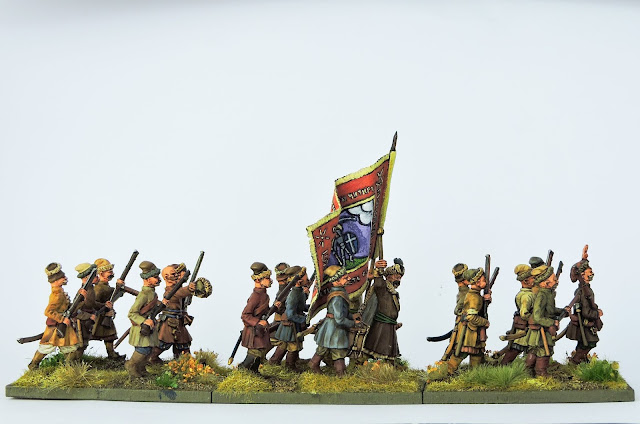 Second up, I have a limited number of the excellent...
Posted in Basing, Donnybrook, Modeling, News, Ottomans, Painting, The Great Northern War, Warfare Miniatures, Wargaming

by augsburgeroberst June 26, 2019
To say I have been totally absorbed by my new obsession for 1/2400 scale 1650-1720 period ships would be the understatement of my hobby life time. Not since my Ost Front Microtanks phase of the late 1990s have I been this driven to finding information and being productive on an industrial scale.

I have too many projects going at the same time. Purely a function of bringing out new figures for Warfare Miniatures. Painting samples for the website means that lots of things get started but very often wait for a long time to get finished.

Every base on this post is part of a unit...
Posted in Basing, Modeling, Painting, The Great Northern War, The War of Spanish Succession, Warfare Miniatures, Wargaming

As it should be. Swedish GNW Cavalry


It's a legitimate question. Why has it taken you so long to produce a unit of your own cavalry, based in your own 'chevron' style?
Time and conflicting priorities is the answer. I don't have enough of the former and an abundance of the latter.


I did paint about eighteen riders but only...
Posted in Basing, Beneath the Lily Banners, Modeling, Quindia Studios, The Great Northern War, The War of Three Kings, Uniforms, Warfare Miniatures, Wargaming